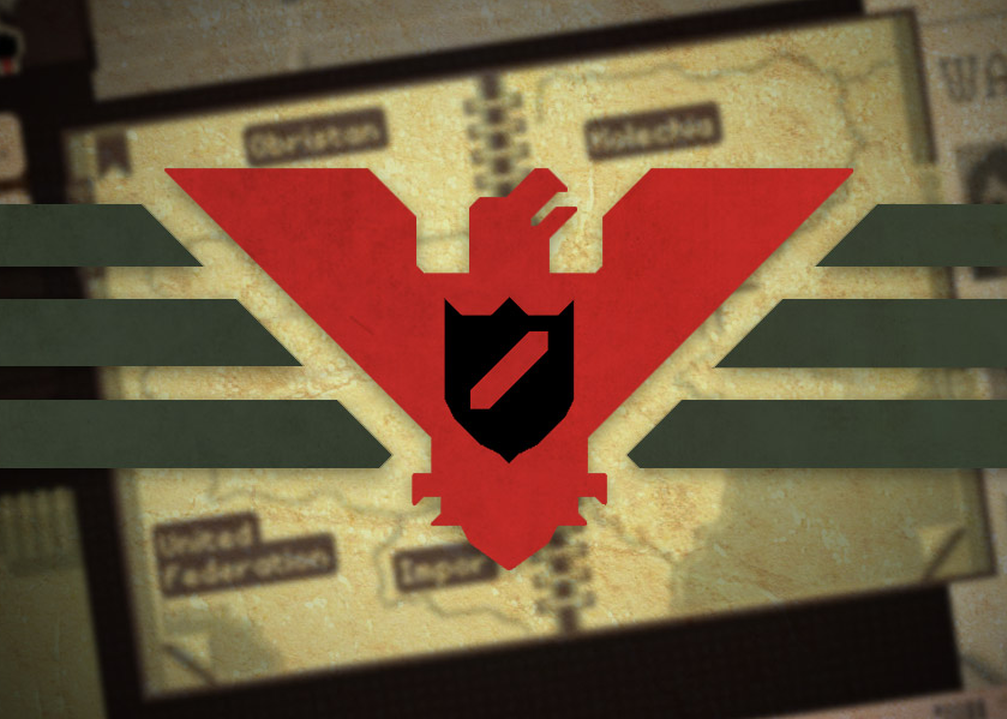 But it’s a game that you absolutely should play, because it’s brilliant. If ever there was proof that “fun” is no longer a criteria in producing an interactive work of art that we like to call “games,” then this one is it.

You play as an unnamed customs officer, warding the militarised gates standing between the rabble of the outside world and your fictitious utopia homeland. At least, it’s a utopia according to the propaganda that you’re exposed to – you never actually see your homeland beyond your customs booth. Your task is simple; make sure the only people that can enter the country are those with their correct documents in place – their passports must be valid, their visa information must match the passport, and of course they must look like their passport photo. You need to deny people access who don’t have the right documentation, while allowing those that do through the gates. 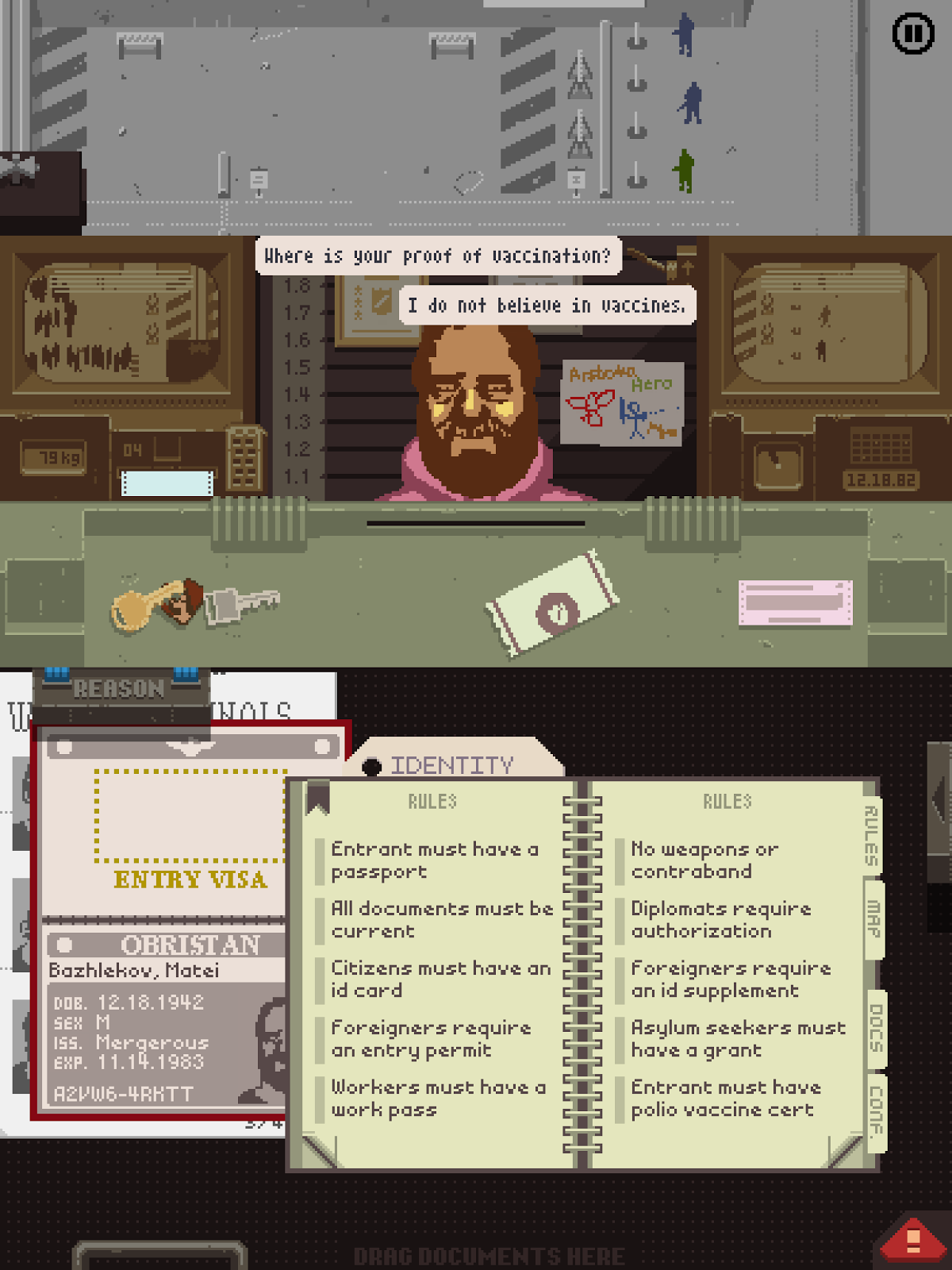 At first this is straightforward enough, but then some terrorist event start up, and the requirements for entry become increasingly more stringent. As that happens, your decisions start to become far more difficult as a moral component starts to come into play. For example, you’ll let a man through who has all his papers in order, and as he leaves he mentions his wife is next in line. Sure enough, a woman steps up next, but there is a discrepancy in her papers that invalidate her for entry. Do you let her through? The temptation is there for sure, but if you let through too many people who are not meant to be allowed through then your superiors punish you by taking money from your pay, and you need that money to feed your family and heat your home. Your pay packet increases with processing more individuals correctly, and if you’re too slow or not good enough at your job, your family literally starts to die from the harsh conditions of life in this supposed utopia.

You’ll be tempted to overlook protocol every time you encounter an individual with a deeply human story to share – people will beg you to let them through under fear of death if they’re returned to their homelands. Other people will try and bribe you. Still others are criminals, and you’ll need to decide whether to call the authorities on them, or listen (and believe) their version of stories. Papers, Please becomes a very difficult game by the end to determine whether a person should be allowed into the country, because the sheer number of bits of information you’ll need to check (finger prints, body scans) becomes truly onerous. But, more than being a difficult game on your gaming skills, it’s a difficult game to process on a moral and intellectual level.

What Papers, Please does so incredibly well is show how dehumanising the whole process of immigration is, and how easy the system is to manipulate by policy makers to deny people entry to a country that rational logic would suggest there would be no harm in letting them in. The cold, Soviet-industrial aesthetic creates a clinical environment, which is contrasted through the snippets of each individual story that you’ll experience. You’ll never be sure if you’re being told the truth, of course, but the plight of a desperate person forging papers to escape persecution has emotional weight to it, and the conflict between the job and the aesthetic of the world of Papers, Please, and the stories within it creates a sense of escalation as the game progresses from one “day” to the next. 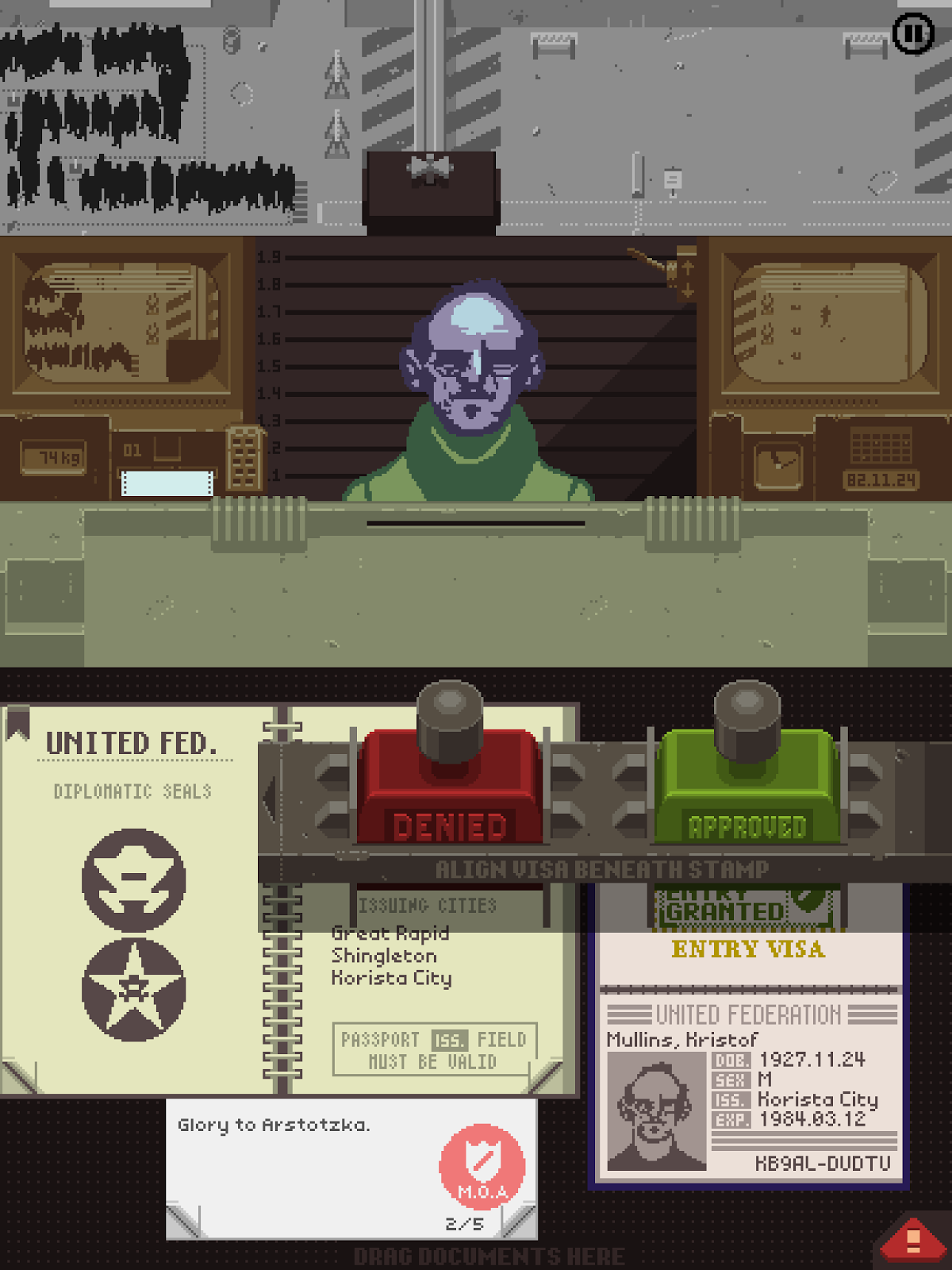 This game is especially relevant to Australia at the moment, where we are laboured with a nationalist Government that is doing its absolute best to dehumanise and villainise desperate people seeking to immigrate into Australia under international asylum laws. In this context, a lot of what happens in this game strikes far too close to a part of Australian culture that I’m truly ashamed of at the moment, and Such is the power of Papers, Please, that I wonder if I’m ever going to be able to fully complete the game… I cannot help but let people through that don’t have the right papers. The game does a brilliant job of showing just how arbitrary immigration systems can be at times.

At the same time I felt bad for my in-game “family” that was suffering even as I was allowing people to reunite with loved ones on dodgy passports. The family is represented as literally nothing more than an icon with their role within the family at the end of each day’s work – “Wife”, “Son,” “Uncle.” These people have no names, no profile images, and nothing to otherwise identify them – they have been reduced to a literal gameplay system. Interestingly enough this direction made me empathise with them more, because the game actively invites you to impact your own position into the game. You never see an image of your own avatar in the game either – Papers, Please, like the very greatest FPSers out there, does a spectacular job of creating the impression that you, personally, are part of the action, and therefore it’s your own family that you’re working to provide for. When I saw that “Wife” was sick because I wasn’t able to provide heating one day, I felt terrible because it was easy to imagine that it was my actual, real-life wife that was sick as a direct consequence of my actions.

All of this emotional connection to the events of the game in the context of something that must have been simple to draw and animate. Papers, Please doesn’t look like much in screenshots, I know, but again I point to the industrial aesthetic and the way it succeeds in dehumanising the world that is so effective. It’s hard to see distinct features in characters as they come up to your booth to drop off their passport. Because they are hard to visualise, you’re forced to listen to their stories in order to try and understand who they are and why they’re trying to cross the border. 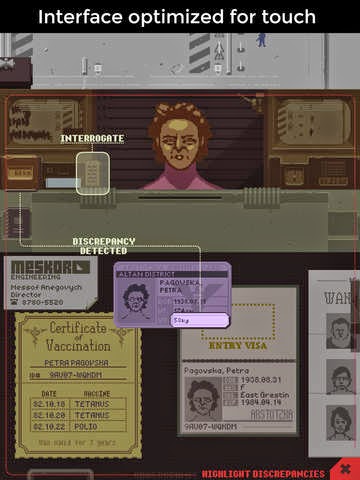 The sheer inhospitality of the environment, the propaganda-laden newspapers and the overabundance of greys is also faintly terrifying, calling to mind the kind extreme authoritarianism and xenophobia that marks out the extreme right side of politics. At no stage are you invited to sympathise with the nation whose border you are entrusted with “protecting.” Rather, you’re exposed to the impact that such policies have on conventional people, both the evil ones and, tragically, the good.

Make no mistake, Papers, Please is a political and sociological statement, and often it’s quite a distressing one. But it also stands as proof of the power of games to extend beyond the boundaries of simple entertainment and thrills, and it tells a hell of a story in the process.