In recent years we’ve seen some impressive efforts to take the gamebook format – a popular kind of “game” that largely predates video games – and revitalise it for a modern audience. Joe Dever’s Lone Wolf was given an invigorating combat system and 3D presentation. Australia’s own Tin Man Games turned arguably the most famous gamebook of all – The Warlock Of Firetop Mountain – and turned it into a tactical miniatures experience. These are great. Nomad Games’ take on the Deathtrap Dungeon series, however, is not.

As a quick primer for those who aren’t familiar with gamebooks: before RPGs became the visually detailed, deep experiences that they are today, authors found a market in writing choose-your-own-adventure books with combat systems. You’d read a passage of a book, and generally be presented with two or three choices on what to do next. Depending on your choice you’d flip through to a different section of the book. Sometimes you’d encounter enemies and need to roll dice (or use some other combat system), to emulate the experience of a pen-and-paper, tabletop RPG. Most of the time your character would die, because there were dozens of endings, depending on the choices you made, and most of them were “bad.” If the decisions didn’t get you, the combat system and monsters would. There was always one right ending, though, and gamebooks did a remakable job of making you really need to reach that that one good ending.

Thankfully, the Deathtrap Dungeon Trilogy is not a literal interpretation of the books – by which I mean you don’t need to sit down and read endless paragraphs of text as a virtual recreation of the original books. There are plenty of video games that have done that in the past, but after Firetop Mountain in particular, it’s hard not to expect more from adaptations now. Unfortunately, the minimum effort that went into Deathtrap Dungeon is still disappointing. 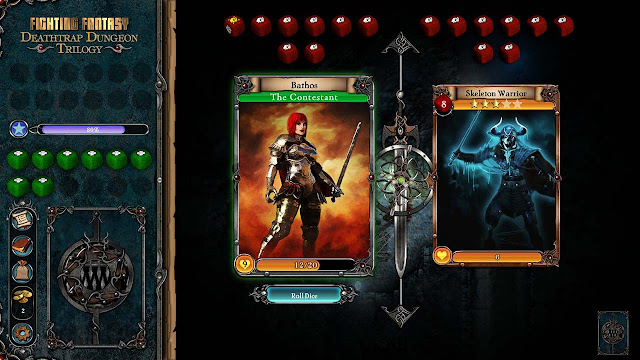 You’re presented with a top-down view of the world, and your character will auto-move through it based on your decisions. They’ll turn left if you select that option, or approach the creepy-looking statue if you want to test your luck. There are plenty of traps and obstacles along the way, and most of those are resolved with a simple roll of the dice. You might need to fight a monster, for example, and you’ll roll a number of dice equal to your combat skill, with each “fist” die face that shows up doing one damage to the enemy. At other times you’ll need to test your luck, at which point you’ll roll a different set of dice, and either get a minimum number of four-leafed clover die faces or face some horrible consequence.

That’s it. That’s the extent of the gameplay. You’ll do this over and over and over again, and the only real variations between characters are the dice they get to play with, their health, and a couple of secondary abilities. After you kill enough monsters or avoid enough traps, your character will “level up” with means you get to improve the odds that one of your dice will show a fist or clover face on a roll. It’s hardly engaging character building, however appropriate it is for the kind of gameplay that gamebooks offered.

I loved gamebooks as a kid, but the reason they faded from prominence is no secret – video games got to the point where they simply did more. Gamebooks, laboured with the inability to do much more than give players dice to roll, just weren’t able to adapt, and it wasn’t like there was literature behind the gameplay. Fighting Fantasy – the series that Deathtrap Dungeon belongs to – was written better than most thanks to the authors behind the series, but it’s still incredibly pulpy stuff, and the inherent limitations of the gamebook format mean that the ability to write characters, settings, or broad narrative arcs was always limited. There’s a reason that most gamebooks took place within the narrow confines of dungeons or other linear spaces. 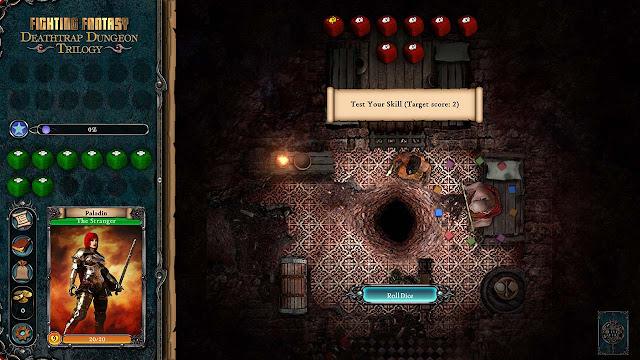 Deathtrap Dungeon Trilogy isn’t much of a looker, either. the environments are static, and the character is represented as exactly top-down, meaning that as they move you simply watch the top of their head while feet swish back and forth under it. When combat is joined, you’re shown a static card representing the enemy, and while the art on those cards is actually quite nice, the lack of animation and personality means that you need to have played a lot of pulpy western RPGs to fill in context and create an image in your head of what the battles must look like.

Perhaps the most egregious issue of all is that at first, only the first gamebook is available to play. The two sequels are initially locked. I understand that as a trilogy these are sequels, but c’mon. None of them are dependent on having played the predecessors, and given the grindy nature of them, it would have been nice to juggle runs between the three of them. There was no reason to have anything in this package locked away from the outset.

The Deathtrap Dungeon Trilogy is still fun, in the sense that gamebooks are good fun, and the development team haven’t broken anything in the fundamentals. But this is also a deeply uninspired effort, and the Nintendo Switch has such good, innovative adaptations of gamebooks already that it’s hard to see where the appeal of this package is. The really hardcore traditionalists would rather read a proper adaptation of the books. More casual fans would have wanted more done with them. The presentation is pedestrian, and the gameplay basic. It’s genuinely difficult to imagine who would get much value out of this package.