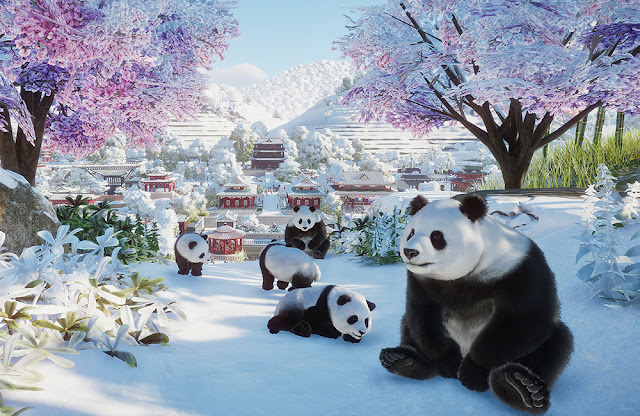 I wonder how long it will be before “tycoon games” start to instead be known as “planet games”. That certainly seems to be the goal of Frontier Developments — after a very successful spiritual successor to RollerCoaster Tycoon in 2016’s Planet Coaster, the studio has now given the same treatment to zoo management with Planet Zoo. True to form, it’s a management sim that offers plenty of depth and unrivaled scope for creativity, but can also be rather daunting to approach.

As you may have guessed, Planet Zoo sees you managing a series of zoos. That obviously means designing the enclosures, choosing which animals to buy, and keeping staff and visitors happy, but also managing the crucial role zoos play in conservation efforts. Breeding programs for endangered species and educating guests are every bit as important as giving people the chance to watch monkeys swinging about on their playgrounds.

To achieve that, Planet Zoo uses two different currencies (don’t worry, neither is a “premium” currency, and it’s disappointing that I even have to clarify that). Money is money, and works as money does: it comes in when guests enter the zoo, buy things from shops, or give donations, and it goes out when you build stuff, buy stuff, and through general zoo upkeep. Conservation credits, meanwhile, are earned when you release animals into the wild and complete certain challenges. 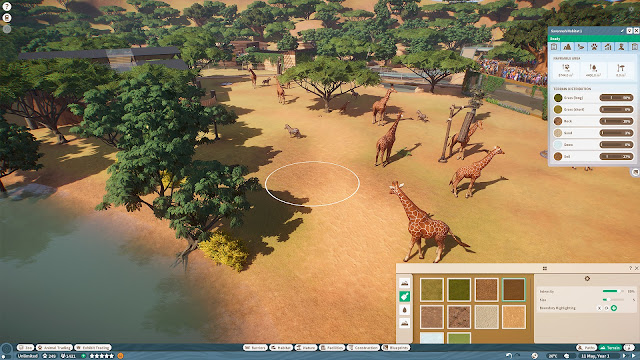 When it comes to buying new animals for your zoo, some will be available for cash, while others—typically the rarer, more sought after ones—can only be purchased with conservation credits. If you want access to the highest profile animals so that you can pull those guests in, you’re going to have to do your part for the planet’s conservation.

(At least, that’s the idea, and what happens when you’re playing in the purely single-player modes. Planet Zoo’s Franchise Mode, on the other hand, has you buying animals from a shared, multiplayer marketplace that is—by design—susceptible to the whims of economics. At the time of writing, those whims mean the marketplace is flooded with warthogs, because they’re cheap to come by and easy to breed, making them perfect for grinding out conservation credits. Anything more endangered than that comes at a premium.)

Beyond that, the management side of Planet Zoo sticks closely to the management sim standard, with plenty of different intersecting sub-systems to micromanage so that your zoo runs as smoothly as possible. Healthy and happy animals depend on good habitat design and good care from keepers and vets, which depends on things like research (to unlock new habitat items) and staff management. Happy guests depends on things like prices, zoo layout, animal welfare, and educational resources (Planet Zoo, apparently, takes place in an alternate world were the general populace enjoys learning new things). Good financial management plays into all of that, and crises like disease outbreaks or animal escapes can throw the odd spanner in the works. 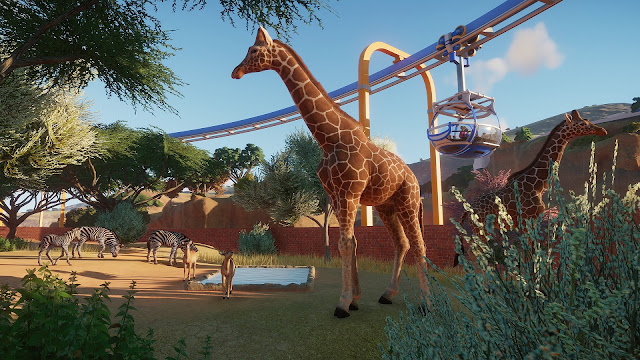 If don’t want to deal with quite so much micromanagement, Sandbox mode gives you unlimited funds to play with and all items unlocked from the get-go. If you just want to focus on designing the perfect zoo, this is the way to go—you’ll still have to deal with some management stuff, but it’s a lot less strenuous when you can just throw money from you bottomless bank account at any problems that arise.

Whether in Sandbox, Franchise, or one of the other handful of modes, Planet Zoo will inevitably see you designing and building plenty of different attractions and buildings. At the very least, you’ll be custom-building enclosures for your animals, but you can also create your own buildings and decorations with an extremely deep, robust construction system. The basic idea is that the game gives you a huge assortment of different construction pieces, which you can then combine and arrange to your heart’s content to build just about anything you can imagine.

The trade-off to such a deep construction system is that it can be quite difficult to wrap your head around. Planet Zoo gives you so many different ways to manipulate each object—from just freely moving it, to fine-tuning placement and rotation along individual axes, to snapping to different grids or “snap points” on other objects, to duplicating things—that even something relatively simple can take a lot of fiddling around to get right, at least until you become familiar with all the tools. 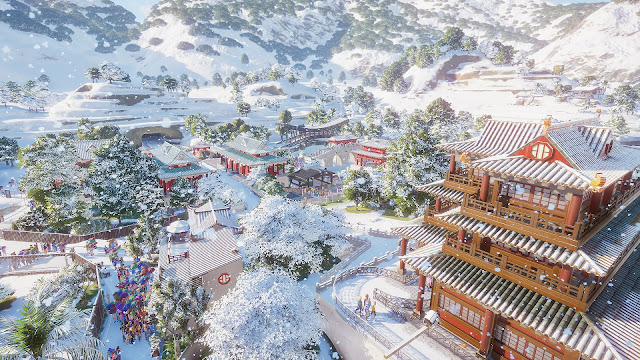 A general lack of tutorials compounds that issue. The in-game help database and the first couple of levels in Career Mode go over the basics of zoo management, but there’s not anything I could find goes into any sort of detail about the building system in particular. There are already some good resources that players have created, but it’s a shame that there isn’t a bit more available inside the game itself.

At the same time, you could just ignore building system entirely, and rely on the pre-made designs. There’s a decent range of different designs for each type of building and a wide variety of decorations created by Frontier Developments, which are unlocked through the normal course of play, and Steam workshop integration means any player can easily share their blueprints with the rest of the world. The range and sheer creativity on display among the player-created blueprints is already impressive, and it can only get better as time ticks along.

Ultimately, Planet Zoo is to zoo management games what Planet Coaster is to theme park management games—a spiritual successor to tycoon games of days gone by, with more depth and more freedom for creativity than ever. Some of the more complex elements can take a while to really click, but when they do, Planet Zoo becomes an engrossing experience.