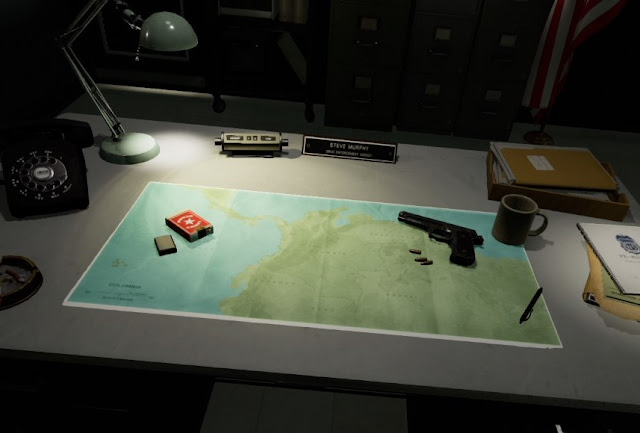 I have played a lot of video games over the years. According to Metacritic, in the half decade or so that DDNet has been listed there, we’ve reviewed 2,333 games, of which a big percentage was my doing. Across all of those games I don’t think I have ever come across one that misunderstands the genre that it belongs to quite like Narcos: Rise of the Cartels.

In theory, Narcos is an XCOM clone. It doesn’t really try to be anything more than that, either. You’ll form a squad of very mortal, easy-to-kill soldiers, and then go through a series of missions that are played out over a grid-based isometric perspective, where you’ll need to kill all of your opponents, while trying to protect as many of your own squad as possible. At the conclusion of a mission, you’ll be taken to a briefing screen, where you’ll level up surviving squad members, recruit some newbies if necessary, and then set out to do the same thing again. That’s all there is to it, and as far as no-frills XCOM clones go, Narcos’ set-up is the most no-frills of them all.

No-frills as it is, this still could have been fine. XCOM is fun, after all, so it stands to reason that an straight-up, unapologetic XCOM clone could itself be fun. Narcos, however, makes one great big, catastrophic error, and it ruins the game in its entirety. In Narcos you only get to activate one character on your turn. You’ll take a small squad into each battle, but each turn you only get to command one, and then the enemy AI gets a turn to command one of its soldiers, and so on and so forth, much like how a game like Chess is played.

But the entire worth of XCOM and its many genre spinoffs is wrapped up in the squad-based tactics that its structure enables. The depth of this genre is in setting up crossfire and flanking opportunities. In setting up defensive perimeters through the skillful use of overwatch. Of protecting vulnerable and injured members in the squad by using the others to provide covering fire. Absolutely none of this is possible in Narcos, because you’ll only ever be controlling one character on your turn. Send the character to the front lines? Better use them in the next turn as well, since they’re almost certainly going to be fired on every turn by the enemies until either they, or the enemy is dead. At which point, a second enemy will start to make an approach… and at that point you may as well continue using the same character.

In almost every mission I ended up using my most robust and capable fighter, almost exclusively, for the entire level. There was no tactical reason to even try playing any other way. If I tried to use a different character, my first squaddie would simply continue to take fire from the same enemy, because the AI always activates the nearest of its pieces to your squad, and uses that character over and over, until the point man you sent forward is killed. The rare mission where enemies had surrounded my characters did mean that I needed to use all of my characters, but they were intensely frustrating experiences, as I needed to guess which of the enemy’s characters would move first, so I could get my countering squad member into a defensible position (I nearly always got it wrong). Narcos can be a difficult game, but it’s never strategically challenging. It’s difficult in the only way a game this shallow can be – the enemy can take your characters down quickly.

This one issue breaks the game to the point that it’s not interesting to play on any level. Level design doesn’t matter because you’re focused on moving a single character across the map, taking out enemies one at a time. Levelling up the squad isn’t that interesting since nothing about the game encourages team work, so instead you’ll just throw whatever skills make the character a better individual fighter. The structure of the team itself is pointless. Even if Narcos had an interesting plot – and as a TV show tie-in that relies on your existing knowledge of the show it most certainly does not have an interesting plot – the dreary, rote approach to every mission would kill any enthusiasm for it. 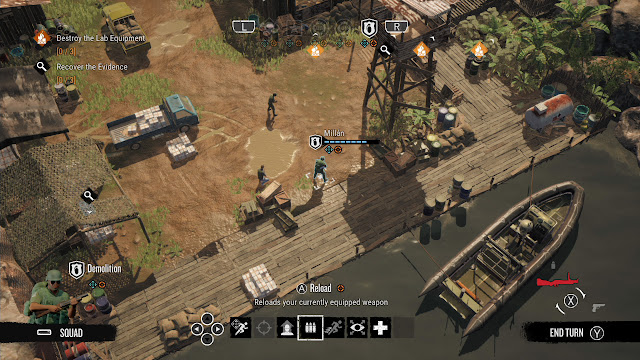 There are all kinds of minor issues with the game, too. Every so often you’ll get the chance to either take an extra shot at a wounded enemy, or take a pot shot at an enemy that has moved into the firing line on their turn. Both these things are fairly common to XCOM games, with the overwatch feature that they all share, but in Narcos, you’ll need to physically take the shot yourself through a short third person shooter-like minigame. The problem is twofold. Firstly, you need to take the shot quickly, because there’s a strict time window to get it in before the opportunity to cause extra damage is closed, but mechanically it’s the worst third-person shooting I’ve ever experienced. Lining up a short is a real fight with the controls.

Secondly, the feedback system is broken. You’ll be able to mash the fire button and your character will get off a fair few shots in the time window, but if you miss the first one, you’ll do no damage, even if you perfectly line the gun sight up for subsequent shots. The enemy will even react as though they were shot, only for no damage to be applied once the little mini-game is over. Narcos didn’t need this “action” gimmick. It’s an XCOM clone. It’s meant to be strategic. But if the developer was so convinced that this is an innovation that the genre needed, the least they could have done is make sure that it worked properly.

The XCOM clone genre is a small one, but there are plenty of quality games within it. Phantom Doctrine, for example, took the base idea and gave it a great espionage theme. Mario + Rabbids: Kingdom Battle gave the serious tone of the genre a colourful, manic coat of paint. There’s Warhammer 40,000: Mechanicus to give the basic tactics of XCOM a Warhammer sheen of paint. Achtung! Cthulhu Tactics did a good job of bringing the XCOM action to Lovecraft’s nightmares, and XCOM itself remains a hugely playable game. There’s simply no reason to play something so utterly bereft of thought as Narcos.