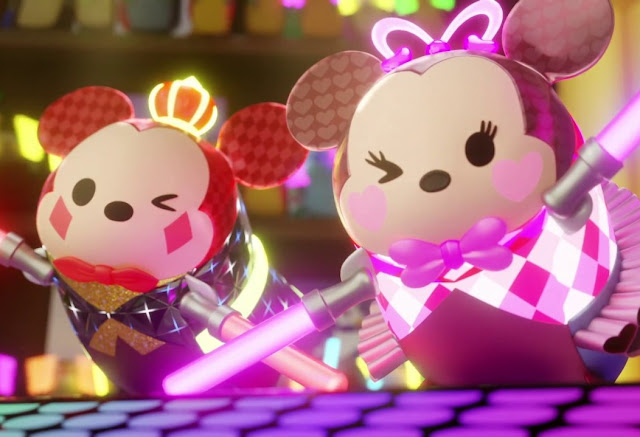 Modern Disney is the dominant source of American entertainment, but its various pivots and acquisitions on the path to being the king of film and television content has left it a very pale shadow of the creative outfit it once was, when it was synonymous with children’s dreams and magic. You go to Disneyland now and that big castle that dominates the centre of the park, and the weird mouse and duck characters that run around giving the nostalgic oldies a hug, is the only reminder left of what the company was before it began churning out Marvel, Star Wars, and artless remakes of classic cartoons.

There is one thing has preserved the spirit of whimsy and adventure that has me almost (but only almost) wanting to sign up for Disney+ to access the back catalogue on it; that thing is Tsum Tsum. A product of the Japanese branch of Disney, Tsum Tsum is a range of mechandise, television shows, and games which redesigns all the iconic Disney characters into adorable little cylinder critters. While the likes of Mickey and Donald have been almost forgotten by the overall company, in its bid to milk people dry through those super-cool Avengers products, in Tsum Tsum Mickey and his quaint cohort are still very much front-and-centre, and they are so very collectible. Disney Tsum Tsum Festival was a surprise announcement on Nintendo Switch a while ago. Now that it has arrived, and I just wish that Disney produced more of this kind of thing, which does remember what “Disney magic” is supposed to represent.

Tsum Tsum Festival is a “fun for the whole family” kind of multiplayer party game. Unlike something like Mario Party or Mario & Sonic at the Olympic Games, there’s no real effort to give context to the collection of minigames on offer. There’s no board game or story mode. However, the bulk of the minigames do offer a richer experience than the microgames of those other party games, and it’s pitched just right so that everyone, regardless of age, can pick up a controller and have a blast. 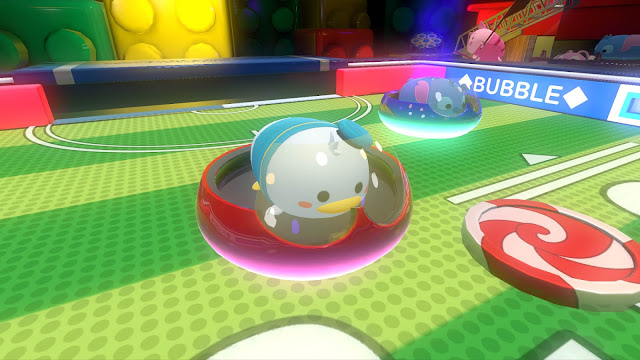 One thing needs to be mentioned first, though; there’s very little you can do playing this using your Pro controller, or with the Joycons attached to the unit. You’ll need to detach them because most of the minigames do feature some form of motion control. It’s not my ideal way to play when out and about – I can’t play Tsum Tsum Festival on the train or plane, for example, because there’s just no way to safely stand or balance the Switch unit in that kind of environment without risking the entire unit going flying by a bump. On the other hand, for a game that is so dominated by the multiplayer experience, designing each minigame around a single Joycon for input was the right move – there’s everything you need for an impromptu multiplayer session sitting right there on either side of the Switch unit.

The minigames range across a gamut of party favourites. Some of the highlights include a simplified rhythm game, some parlor sports (air hockey and curling), a lightgun-style game and a riff on Pac-Man. Each mini game plays differently, but plays well, and the best way to enjoy Tsum Tsum Festival is to get a group of people together and then play a “competition” of a number of events back-to-back, to see who comes out top overall. With some beers and wines (or Coke-Cola for the kids), the minigames strike that perfect balance between accessibility and skill testing to be absolutely laugh-out-loud funny in friendly competition.

Tsum Tsum Festival doesn’t offer as much for the single player. You can play against AI, but beating the AI is hardly as much fun as snatching victory by slapping the controller out of your mate’s hands at just the right moment. There’s one exception, though – the original Tsum Tsum puzzle game is replicated in the package perfectly. Tsum Tsum is a match-3 like puzzle game where you aim to draw your finger across the touch screen, lining up as many of the same Tsum Tsum faces as you can to make them disappear. You’ll have to work quickly, though, because you’re on a very strict timeline to get as many points together as possible. It’s the kind of fast-paced puzzle action that is better suited for arcades than lengthy sit-down sessions (which makes sense since it was originally an arcade game in Japan), but it is nonetheless a lot of fun, and something that I’ve found myself spending a lot of time playing when watching TV or otherwise have my attention split with other things. 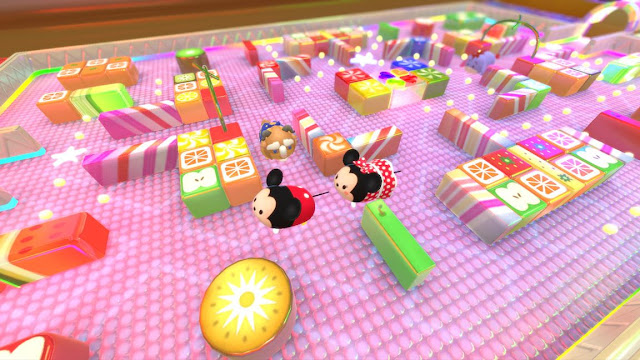 It’s the presentation that really ends up selling Tsum Tsum festival. It’s as adorable and colourful as you would expect from Disney at its most classical best, and the development team at Bandai Namco have done a really good job of injecting even more humour and personality into the adorable characters. They form the game’s rewards system too, as you’ll earn coins through play that can be used to unlock more of the little things to play with. No, there are no microtransations, and no, it’s not a grind to get ‘em all. Bandai Namco knew that Tsum Tsum Festival was the most casual of casual experiences, and made sure that you’d earn everything from a couple of sessions of play.

It’s easy to dismiss Tsum Tsum Festival as being “just” a minigame collection, but there’s value in those – especially on the Nintendo Switch, which is built around the easy sharing of experiences but has, to date, had a relatively minimal application of that potential outside of Nintendo itself. With Christmas parties and the like coming up, there’s going to be plenty of opportunities to break this game out, and it’s one of those that kids can love… but then also holds the kind of nostalgic appeal to anyone who grew up with Disney (i.e. all of us) that allows them to enjoy it too. We don’t see Donald Duck in enough games any longer. I’m happy to have him here.