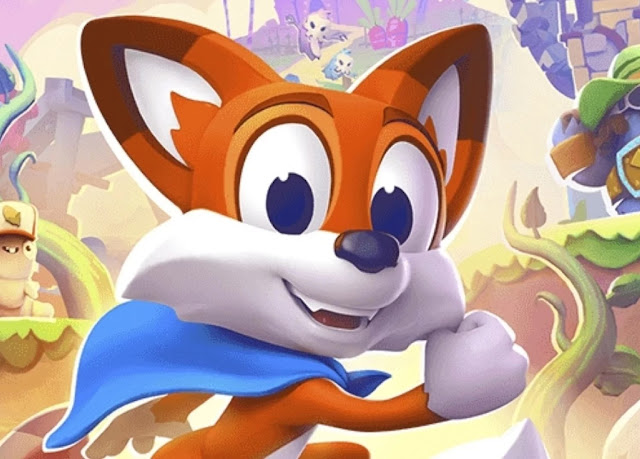 Playful Studios is a Microsoft-associated development team that in 2017 created Super Lucky’s Tale, a game which the Xbox One lineup sorely needed. It was a game which brought some refreshing diversity to an otherwise single-minded E3 presentation about guns and cars. Here was a colourful 3D platformer in the vein of classic titles, with an infectious energy and an eye for movement.

Unfortunately, when it landed in players’ hands, the reception was mixed. Now, Playful Studios has taken a page out of Nintendo’s book, slapped the word “New” onto the title and coated their game with a fresh layer of polish for a Switch re-release. Whereas Super Lucky’s Tale was one-of-a-kind on the Xbox One though, on the Switch it’ll have to compete with other heavy hitters of the genre. So how does it hold up?

New Super Lucky’s Tale is a no-frills 3D platformer about a fox named Lucky who is sucked into an alternate dimension through the pages of a magic book. Lucky is tasked with finding the lost pages in order to travel to new worlds and ultimately reunite his family against a great evil. It’s a simple plot serving as an excuse for running and jumping through a diverse set of environments, collecting a variety of objects, overcoming challenges and defeating bosses, just like in the mascot platformers of the PlayStation 1 and Nintendo 64 era. A combination of 3D arenas and 2D sidescrolling levels, mixed in with some light puzzles on the side, form a cohesive adventure full of energy and joy. 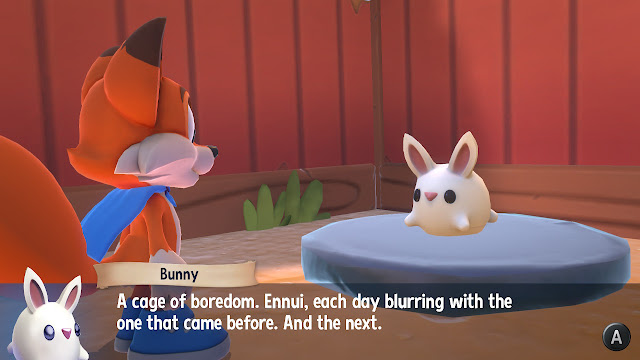 The Switch version is an updated re-release of the original Xbox One title, sanding away many of the inconsistencies of the original release. One of the biggest gripes was the mostly-fixed camera, which on the Switch has been changed to a fully free camera, with the occasional nudge depending on the intended direction. The new camera system works well and the levels have been drastically altered to suit: it means that the game feels truer to the classic titles it seeks to emulate, and camera issues should factor in less to mistakes. One other big change is the way pages and progression is handled: in the Xbox One version, the high expectations made page collecting a laborious process in each world; on the Switch, the requirements are lowered significantly so that players can challenge the boss and move onto the next world without even finishing all the levels.

3D platformers have had something of an identity issue lately, and the causes are plain as day: the original heavy-hitters of the genre (the likes of Banjo-Kazooie, Super Mario 64 and the Crash Bandicoot trilogy) were so beloved that they became generation-defining, but at the same time each one bears the baggage of being developed at a time where the world was still figuring 3D out. In 1996 the shift from 2D to 3D was earthshattering. The possibilities were limitless. And when presented with a limitless array of possibilities, human nature tends towards doing one thing: exactly the same thing we were doing before everything changed.

This is perhaps a contentious point but I would argue that the platformer genre never quite figured out how to belong in 3D. Jumping on enemies and finding collectibles is fun in 2D because you can see all the interactable space at once. Once you introduce a camera and a Z-axis everything gets… complicated. Jumping on stuff is frustrating, platforms don’t feel safe, 360-degree turning and movement is imprecise and all the while you’re negotiating with a camera that shows maybe 60% of the necessary information. I propose this as one of the reasons why Crash Bandicoot still had a bunch of 2D levels, why Nintendo is so much quicker with their NSMB series compared to its 3D outings, why indie developers have achieved overwhelming success with 2D platformers and still have trouble with 3D. 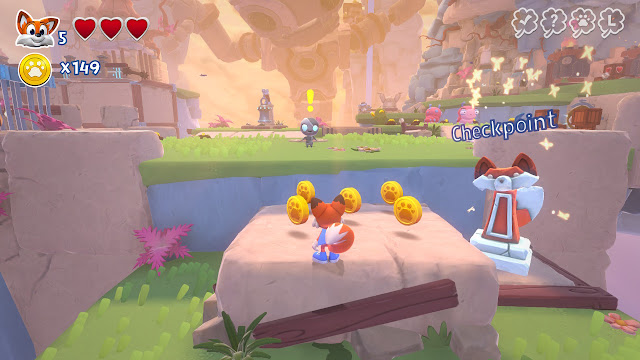 Thankfully, New Super Lucky’s Tale learns many lessons from the games which came before it: little ways to improve the experience which would normally go unnoticed. Level design takes a great deal of inspiration from Mario’s 3D Land/World outings, focusing on small, intricate challenges which can be overcome quickly. Falling into pits doesn’t result in a lost life either, but merely losing one of three health points. Lucky has a generous double-jump and a spin attack which realigns your momentum just like the Cap Throw in Super Mario Odyssey – allowing for a greater degree of control. Checkpoints are plentiful and levels are much more about movement than giving players a hefty challenge. There’s not a great deal of exploration to slow the game’s pace, not even in the hub world where this type of play is more encouraged. Overall, New Super Lucky’s Tale works well.

But even these updates can’t hold back a fundamental truth of this game’s design: to enjoy New Super Lucky’s Tale is to look past a number of design inconsistencies that other genres had long left behind. Thankfully the two groups most likely to do that are well within Playful Studios’ target market: younger players and those nostalgic for the 3D platformers of yesteryear.

For younger players the game is charming enough, there are plenty of jokes and interesting plot beats that remain novel throughout the game’s run time. Interestingly, some of the game’s dialogue has been rewritten in order to make characters more consistent and, on occasion, much funnier. For example, in the Xbox version the first boss makes a simple lampshade about their motives, while in the Switch version she makes a big deal about the protagonist being her “rival”, and allows you to progress out of an arrogant desire to face a true challenge (she doesn’t seem to realise that she’s the first, and easiest, boss). The colourful aesthetics and whimsical world design will also be sure to put a smile on anyone’s face: this is a very positively minded game, and when it hits its stride it does successfully make you feel nostalgic for the older days of game design. 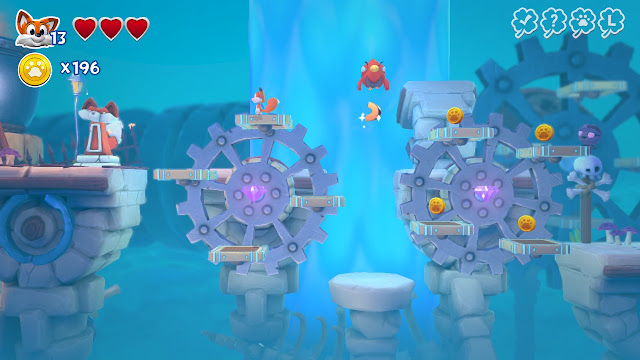 For veteran fans of 3D platformers, Super Lucky’s Tale is a serviceable torch bearer for the legacy of mascots like Crash and Banjo. While Lucky doesn’t have a great deal of personality, his visual design rings true to other platformer mascots, and his movement and actions feel true to form. Levels are wide and inventive, featuring excellent theming and a fresh set of challenges and mechanics as the game develops. There are also plenty of things to collect: each level has a potential four hidden pages – one for finishing, one for earning more than 300 coins, one for collecting all five letters of the word LUCKY and one for finding a secret bonus challenge. It’s all standard fare and should be a comfortable fit for fans of the genre. While it doesn’t push any boundaries of its own, and while the levels did lack true “wow” moments, there’s little to complain about either.

But if you’re not in those key demographics, you might have a harder time to find the fun in New Super Lucky’s Tale. As mentioned before, this game is a collect-a-thon first and foremost, the platforming segments range from trivial to slightly challenging, and once you set aside the charm of the level design, it really is a set of motions to go through. It’s not much more than just content.

New Super Lucky’s Tale is a competent game but not one which will excite players. It’s got a clear target demographic in mind and delivers on what it promises. At the very least, it’s a marked improvement on the original Super Lucky’s Tale, and is arguably the most immediately playable iteration. Fans of 3D platformers will find that this game can contend just as well as the games of old, but without the benefit of brand recognition and nostalgia, Lucky has a real uphill climb in order to achieve greatness. If you’ve already played the other 3D platformers on the Switch, this one is worth a look.