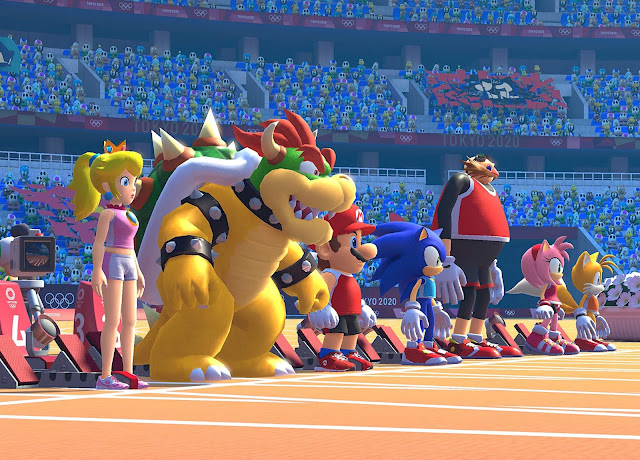 Mario & Sonic have been kicking around both the Olympic Games and Winter Olympic Games for a fair few years now, and there’s very little that can really be said about the series at this point. It does everything that you would expect, but given this title’s big step forward is to give players retro games to play, SEGA’s shot itself in the foot a little, because all that addition does is crystallise just how shallow all the minigames in the package are… because all of them could easily be converted into 8-bit experiences.

The idea of throwing retro-styled minigames is a nice touch, given that the host city of the 2020 Games – Tokyo – also hosted the 1964 event, and it’s a nice nod to Japan’s Olympic history to pay homage to that event while celebrating the new one. The problem is that those minigames are about as complex as the “new” events, and that only goes to show how shallow the entire experience is. Yes, you’ll get to play recreations of football, sports climbing, gymnastics, volleyball, right through to swimming, archery, and running, but every single one of those events can be effectively mastered within a few plays. Yes, you can keep practicing to improve your scores and times by shades, but there’s not that much of an incentive to do so. You don’t need to perform at your very best to get through the story mode, and outside of that the only real way to play with others is to dive into single events – as easily forgotten as enjoyed, and hardly enough to foster the competitive spirit.

The other Olympic video game that SEGA has developed – Olympic Games Tokyo 2020: The Official Video Game – hasn’t been released in the west just yet, but is readily available in English if you buy the Japanese version. It’s great because it offers a ridiculous wealth of customisation for your characters, and the mechanics are slightly tighter and more demanding, making it a game where having the top score feels like an achievement. The Mario & Sonic title is more geared towards multiplayer fun, and it works fine for that, but there’s also so little value in playing it outside of the context of a party. 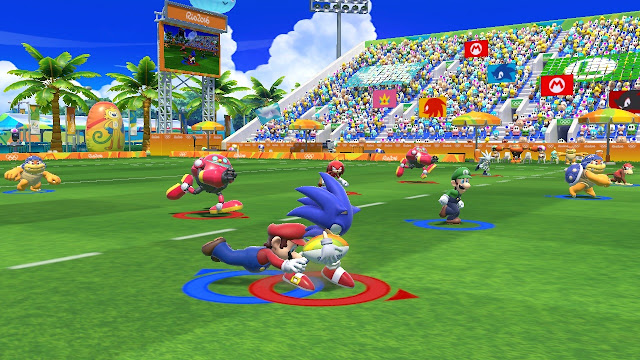 Furthermore, why can’t I play those retro events with the modern coat of paint? Some of the minigames that have been “de-volved” to represent the 1964 Olympic Games are some of my favourite Olympic events. I love volleyball. I love the canoe and kayak events. Those are 1964-only events, and it would have been great to have them as both old and new. SEGA also seems to have scaled back its interest in “dream events”. With earlier Mario & Sonic titles, it looked like these things would come to dominate, thanks to their very Mario Kart-like application of gimmicks and powerups. With Tokyo, however, they’re barely a passing mention and a fleeting few events, with each of those hardly being “enhanced” by the enhancements.

Finally, while I’m bellyaching, the online multiplayer environments is terrible. Unlike the “proper” Olympics title, you can’t send fun little emoticons to other players while waiting in the lobby, and if you don’t get enough players together in an event in time, you all get booted back to the event select menu. But with so many events splitting the online audience, I found it surprisingly hard to get a game going in most of the events. Yes there’s leaderboards and ratings and all the stuff we’ve come to expect from Mario sports titles, but having to go through a torturous 180-second wait over and over again in the hope of finally getting to go rock climbing for a couple of seconds kills the mood like nothing else.

Where Mario & Sonic at the Olympic Games 2020 shines through is the local multiplayer, and everything is so carefully tuned towards that experience. There are multiple different ways to play, whether you prefer the buttons of a pro controller, two joycons, or motion controls with one. The ability to play most events with a single Joycon also makes it easy to get large groups of people playing together.

The game is also gorgeous, with an overload of colour and slick, cheerful animation. It’s also clear that the developers at SEGA have relished the fact that the Games are on home turf this time around, and never waste an opportunity to show off the tourist traps and iconic locations of the great city (side note: if you are heading to Japan to watch the Games please, for the love of God, take the opportunity to see the city as well. That’s the whole point of travelling internationally to watch an Olympics; learn about the country that it’s being hosted in).

But here, too, there are issues. The only way to play local multiplayer is one event at a time. You just into the event, bash buttons around for a few seconds, and then enjoy a short cut scene where whoever wins stands at the top of the podium. Then you’re dropped back into the menu to pick the next event.

Where’s the option to set up tournaments and work out who’s the best digital athlete over five or ten events? Where are the profiles with career data and all that? Plug-and-play simplicity is important for local multiplayer hijinks, for sure, but there’s accessibility, and there’s feature-light to the point that things get dull. The Nintendo Switch is by no means limited for choice for local multiplayer. Even if you just look at Nintendo’s own output there is a super Mario Party, the ultimate Smash Bros, and excellent iterations of both Mario Tennis and Mario Kart. It’s hard to see how this game will hold up against any of those for sustained party play. 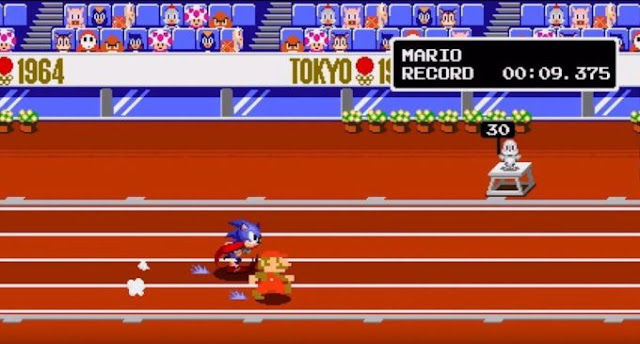 There’s nothing wrong with Mario & Sonic at the Olympic Games 2020. It’s presented with verve and for such a large range of mini-games, the fact that there’s no true dud in there is impressive in its own right. At the same time, it lacks the competitive edge of the “proper” Olympics title this year, and is a little too feature light for its own good as either a single player or local multiplayer experience. That makes it throwaway. Good fun, sure. Well made, absolutely. But throwaway nonetheless.