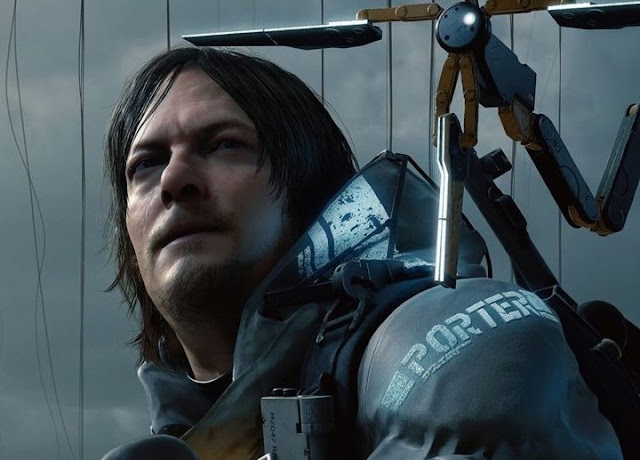 A fair few years ago now, I had the privilege of watching a production of Samuel Beckett’s seminal play, Waiting for Godot. It’s not the easiest play in the world to watch… in fact, very little actually happens in it, and while it can be both amusing and engrossing, it’s not “fun” in the same way that even a Shakespeare production is. As the very title suggests, it’s a play about waiting. Waiting for someone who never shows up (spoiler… I guess?).

And yet that play, among everything else that I have watched, has stayed with me, as has Beckett’s writing. He did indeed win a Nobel Prize for literature, and Waiting for Godot was almost certainly a big part of the reason for that. It’s a play that is studied the world over for its depth, the beauty of the words, the brilliant wordplay, and the various philosophical interpretations that you can make for it. Anyone who cares about the idea of art for art will read – and love – Waiting for Godot on some level.

Death Stranding will stay with me. Unfortunately, for an creative medium that is so hell-bent on demanding that those outside take it seriously as art, it’s quite astounding to see just how unwilling people are to engage with video games as works of art. From the moment the embargo on reviews lifted, the discourse around Death Stranding has been truly rancid, focused exclusively on a bunch of scores that people are putting at the end of their reviews, and then juvenile, gloating fights over the apparently “poor” Metacritic rating which, at 83, is a couple of dozen points better than most of those people would score on any test they tried to take.

For just one example of this across the vast reaches of the media and social media: with over 600 comments (and counting), the review that drew the most attention was the one published on Stevivor. Why? Not because of anything that was written in the review, but rather the 3.5/10 score that the critic gave the game. That comments section is a truly toxic microcosm of virtually all conversations in the video game industry; a bunch of people throwing a tantrum that someone isn’t validating their opinion on a game through their review, and then a bunch of other people condescendingly throwing petrol on the flames because the original review is validating their opinion on a game. None of these people have actually played Death Stranding. It’s not out yet, and that doesn’t matter, because no one’s actually interested in discussing the game anyway. To them it’s a product and they see themselves as good little soldiers because they’re lining up behind the brand they’ve invested in (and has therefore allowed it to come to define them).

I don’t agree with the review on Stevivor, obviously. I respect that the critic is perfectly entitled to his view, and that it’s a valid one. I’ve certainly disliked games that others have loved, and that’s the beauty of art; the better it is, the more polarising it is, because the more it encourages you to have a genuine response to it, rather than passively consume it. I gave Death Stranding 5/5, and while I’ve had nowhere near that deluge of banal “commentary” from my response, there have still been a fair few idiots who have decided that my review must be wrong because I didn’t give the game the low score that they just know it deserves (remember, none of these people have even played the game). Some of them have even cherry-picked one or two of the more negative lines from my review, ignoring the context of the 2,500 words around each of those that explain why I found the game so profound. It has been nothing but disingenuous, truly toxic, nonsense.

All of this would be easier to ignore if there were other positive outlets of discussion around the game, but there just haven’t been many, and it’s been difficult to cut through to find them. I hope against hope that once the game is actually out and people are experiencing it for themselves there will be richer conversations around Death Stranding, but I will be surprised if I get into a conversation with someone about existentialism or whatever else in Death Stranding. There are plenty of precedents to suggest that won’t happen… outside of whatever conversations I get to have on here with people, of course!

There’s simply no incentive to treat video games as works of art, because the community sure as hell doesn’t. A big part of the problem is the industry itself. The industry and pundits alike insist on reducing games into productised trash by calling them content, and making it generally clear that outside of games their knowledge of the arts doesn’t extend past Netflix, HBO, wrestling and Marvel films. Part of the problem is the ridiculous embargo culture. No one gives a toss if you haven’t seen Romeo & Juliet before, they’re still going to talk about the impact of Romeo and Juliet dying in that play. My “joke” about spoilers in the first paragraph of this piece wasn’t really a joke; it doesn’t matter if you know how Waiting for Godot ends, because that momentary thrill of a “twist” or ending is irrelevant to its quality of an art work. Vapid, empty entertainment relies on the anti-spoiler “culture” because they don’t want you to know what’s coming up – that’s the only way they can keep you invested. If you did know, you might start studying the work at more depth (thus realising there is no depth), rather than being passively thrilled by dutifully following along with the “wow” moment plot points.

And so Death Stranding had some incredible restrictions over what we can and can’t talk about, and all the depth of the game is hidden behind the all-powerful “no spoilers!” demand. The entire industry is not structured around being able to handle the kinds of discussions that actually happen when actual art comes along. And in fairness, that’s not often. The frameworks under which we work generally do allow us to give the kind of coverage that games deserve (i.e. most of them are products). It’s just when the rare title comes along that does demand a more sober and in-depth look, the industry, as a collective, loses any concept of how to look at it.

The best analysis of Death Stranding will come six or twelve months down the track, when critics can spoil the joyful abandon, and the less rational, mainstream “gamers” – the product culture warriors – have moved on to whatever frothy tantrum is next on the content road map. The tiny audience left, who enjoy that kind of criticism, is the entirety of the “games are art” space. It’s a tiny, shrinking community, because the kind of response that Death Stranding has experienced will simply discourage any more attempts to do something creative like Death Stranding. And eventually there’s nothing left to talk about.

For those who are grabbing Death Stranding tomorrow – if you’re keen to talk about something other than review scores and whether it’s “boring” or not, then I can’t wait to hear from you. Otherwise… well, go see if you can get that Stevivor comment total over 1,000.