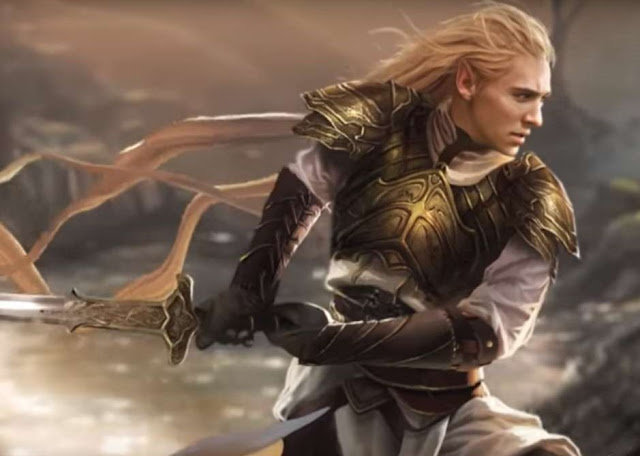 I know I took a playful swipe at The Lord of the Rings as a property in my first Dee Dee visual novel, but I actually really like Tolkien’s vision, and the Peter Jackson cinematic adaptation of it. What has been patchy has been the video games. EA (of all companies) did a brilliant job with the film license, turning over some amazing titles like The Battle For Middle Earth and The Third Age. Warner Bros, which has had the license in recent years… has not done so well. The two Assassin’s Creed clones were decent enough though barely representative of Tolkien, and otherwise it’s been everything from forgettable MMOs to even more forgettable MOBAs.

So it’s been a while since I’ve really enjoyed a Lord of the Rings video game. I really, really like The Lord of the Rings: Adventure Card Game. It looks like Hearthstone from the screenshots, I know. It looks like any of the many other Hearthstone digital card game clones. But it’s not. This one is a single player game, for a start, and does some special things to break from the norm that way.

LoTR: Adventure Card Game is a story-driven game in which you take three “heroes” who form the core of your deck, and then use them, and the supporting cards, to try to make your way through a “quest” – a sequence of scenarios, filled with both Sauron’s monsters and deadly traps. Clear one scenario and you’ll move to the next one – occasionally even having a choose-your-own-adventure-like decision over two different paths to take. On the other hand, if your three heroes are all killed, then it’s Game Over. 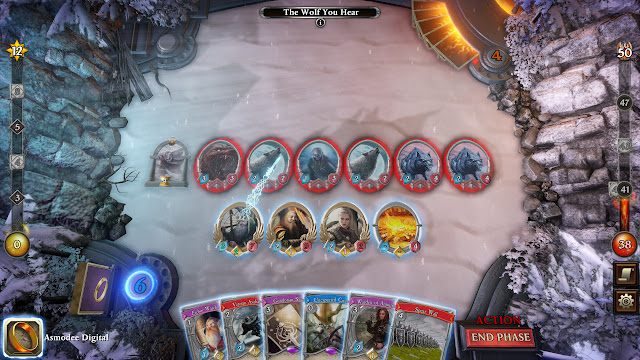 The actual mechanics are too complex to explain here, but you’ll learn the various systems over a five-stage tutorial that takes about an hour, and you’ll be set from there. The basic point is that each character has three statistics – an attack value, a health value, and a “mission” value. Attacks are used to defeat enemies, health is used to survive enemy attacks, and the mission value is used to clear events, with the goal of most scenarios to clear a specific event in order to move on. Each character only gets the one turn every round, however, so you need to balance out dealing with the hordes of enemies with the need to complete missions, while trying to keep your characters healthy.

Each scenario carries on from the last, meaning the characters that are nearly dead start out the next scenario nearly dead. By the time you’ve reached the third or fourth scenario, LoTR: Adventure Card Game has very much become a war of attrition, where you try to desperately squeak by with the limited resources that you have left. What starts out as a cruise through the first scenario quickly starts to show its teeth, and you realise that every point of damage done needs to be carefully considered.

This game could never work as a standard 1v1 card game for that reason. The sides are deliberately unbalanced, with Sauron (controlled by the AI) initially having a hard time inflicting any meaningful damage, but by the end of the quest the tide has most certainly tipped in his favour. Where other card games go as far as to ban anything that’s slightly unbalanced from competition, LoTR: Adventure Card Game doesn’t need to worry about that, and that’s refreshing. The overall game is balanced to challenge players, but within that there’s such a variety of cards to choose between, and so many different deck building strategies available, precisely because the developer has been liberated from the need to provide a “fair” competitive environment. 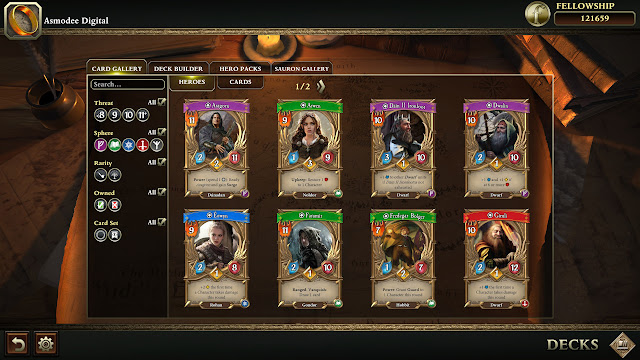 I enjoy the additional context of the action, too. Each quest forms a short story, with scenarios being broken up with descriptions and narrative that explain what’s going on. These stories are, naturally, drawn from Tolkien’s world, and therefore have that very familiar dark fantasy edge to them, but fans of the Tolkien world will love the opportunity to experience familiar faces and visit famous locales. the scope of the game is beyond any one of the books (or films), and while the stories aren’t written nearly as well as Tolkien would have written them, they do act as little side anecdotes to further flesh out the world and events within it.

The one area where LoTR: Adventure Card Game falls down is in the aesthetics and presentation. Peter Jackson’s interpretation of Lord of the Rings has become the standard, to the point where any other interpretation will seem out of place and, somehow, “unofficial.” The developers of this game have tried to capture that aesthetic (with middling results), as well as the musical themes, voice acting, and general sound of the cinema series (with generally poor results). The result is adequate for the game to be an “official” Lord of the Rings title, but hardly an inspiring interpretation.

Nonetheless it is lovely and refreshing to play a digital card game that isn’t so desperate to be the next big thing in esports that it tears whatever heart and soul it might have had right out of the experience. I walked into The Lord of the Rings: Adventure Card Game fully expecting yet another attempt to “do Hearthstone” on the Nintendo Switch. I walked away thoroughly impressed with how completely the game surprised me.