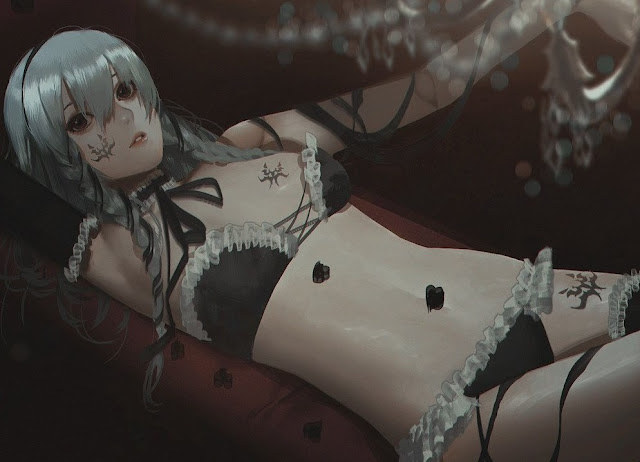 Given the number of games that I play, I have a really simple filter for figuring out which are truly special to me: They’re the ones that I remember in one, ten, or more years. It’s not a useful guide when sitting down to review something that I’ve just played, but it is useful down the track in separating the games I just enjoyed at the time from the ones I consider to be real masterpieces. Last year’s Death Mark is one such example of a masterpiece that’s never really left the back of my mind. Like Danganronpa and Steins;Gate, it’s a distinguished visual novel that represents what I like to see from the genre. Death Mark’s sequel, Spirit Hunter: NG, is, if anything, even better.

Related reading: Our review of Spirit Hunter: NG’s predecessor, Death Mark. Much of that review applies to this game too

NG follows the exact same premise as its predecessor; it presents players with a series of urban legend-style ghost stories and terrors and then tasks them with uncovering the tragic stories of those ghosts, before finding out a way to stop those ghosts from killing the protagonist (or anyone else)  down the track. As I wrote in my review of Death Mark:

Over centuries, Japanese horror, from the old yūrei-zu paintings, right through to books and films like The Grudge and The Ring, have commonly had their ghosts and demons come from a place of tragedy and sadness. It’s all the more terrifying if you empathise with the ghost, see. These creatures are still very bad things for living humans, but they’re not a indiscriminate monsters that kill for the sake of it, like western horror creatures such as the effectively mindless Jason Voorhees, one-note Freddy Kruger, or abject evil of The Exorcist’s Pazuzu. Abject evil and simple monsters doesn’t hold much of a relevance in a lot of Japanese horror, and because of that, the fear that these texts, films, or games create comes from a different place. Indeed, the real evil – and the real horror that is meant to sit with us long after the closing credits – is what is generally done to the spirit while he or she was still alive, and the subsequent bloody swathe of revenge is as much a reminder of the impact of evil than a manifestation of it. 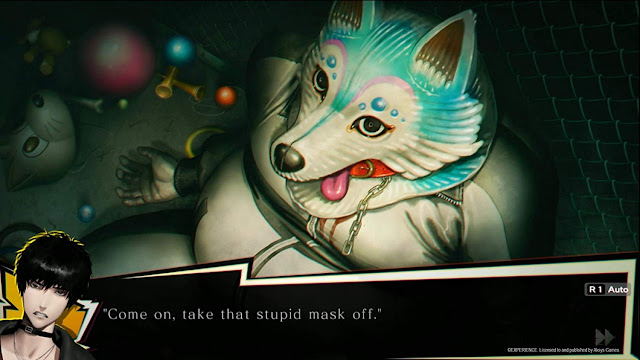 This remains true of NG. The spirits that kill people in the most horrific ways imaginable are also deeply sympathetic creatures, and their stories are as tragic as they are cruel. As a consequence, there’s an emotional resonance to NG that too many other horror games lack. You don’t need to know the zombie’s history in Resident Evil to know you need to shoot it. To put an end to a yurei-like ghost in NG, you need to come to know it. At which point you’ll realise that it’s as much the victim as you are.

An interesting twist to NG, however, is the motivation for doing what you’re doing. In Death Mark you played as an amnesiac, effectively trapped in a mansion aside from those times in which you need to go ghost busting. The protagonist in NG isn’t isolated from the world when he’s not wrapped up in ghostly events. Unlike in Death Mark, he’s not involved in the events purely for himself either. Akira, the protagonist, has a cute little sister, Ami, who is whisked away to some kind of nightmare realm by an entity that introduces herself as “Kakuya.” Kakuya sets Akira with a series of tasks that always involve “playing” with one spirit or another, not only to save his own behind, but also in a bid to rescue Ami.

I love the role of Kakuya. She’s a truly enigmatic entity, in that she’s a clear villain from the outset, but unlike every other malevolent entity that Akira squares off against, she’s not driven to instant violence and isn’t afflicted by an insanity that renders her nearly mindless. As a result, her role in NG’s story is to add an additional layer of mystery to it. Not only does Akira need to focus on his survival, and rescuing Ami, but he also needs to work out why Kakuya has turned him into her plaything. 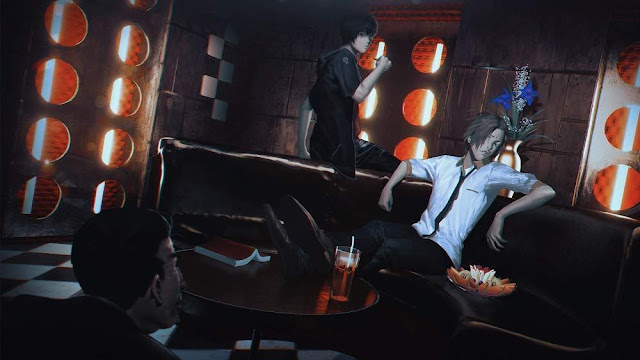 Kakuya herself is an explicit reference to “Kaguya”, from The Tale of Princess Kaguya, which is well known for being the oldest of recorded stories in Japan, dating back to (at latest) the 16th century. In The Tale of Princess Kaguya, Kaguya, who is actually an entity from the moon, is “born” on earth and grows to become a stunningly beautiful woman. Five princes seek her out for marriage, and she proceeds to set them impossible tasks in order to win her hand. Akira isn’t a suitor to Kakuya, but the way she toys with him in setting these “impossible task” haunted games is a clever reference right back to the origins of the Japanese storytelling tradition, and it’s wonderful to play a game in which its deeper mysteries are so firmly rooted in the oldest known storytelling traditions of the nation. Truly this is a game that could only have been made by the Japanese.

NG plays just like Death Mark did. It’s a visual novel, broken up with sequences where you need to explore a haunted environment, as you would a point-and-click adventure game. In doing so you’ll start to piece together the nature of the haunting and the spirit behind it, and find objects that will help you eventually confront that spirit. There will be moments where you need to quickly make decisions in order to escape an attack from the entity, but those are few and far apart. For the most part, everything in NG leads up to that dramatic final confrontation, in which you need to work out what the spirit’s weakness is, and turn that against them.

There are two ways those battles can be completed. One is to dispel the entire reason for the entity’s existence – its “grudge”, meaning that the spirit and the hateful energy that powers it is completely obliterated. That’s the positive end to each vignette that, combined, forms the overall narrative of NG, as it means that everyone survives. Alternatively, the far easier way to win is to simply defeat the ghost. That leaves the grudge behind, however, and the curse is transferred to whatever companion you have with you at the time. That character then meets a horrific ending shortly afterwards. This, too, is how Death Mark worked, and yet, even after having played through this entire experience previously and should be familiar with this formula, the deaths of NG still had a great impact on me. With each “chapter” running at a few hours, you get plenty of time to get to know each character. Cleverly, the writing includes plenty of humour and tension-free character-building scenes precisely because, if the character then does meet a particularly gruesome ending, it’s a character you do care about. 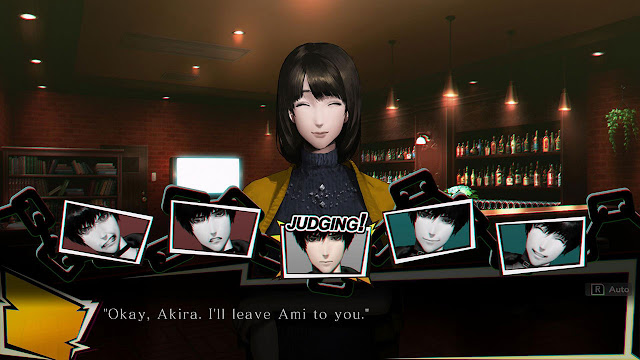 One other area where NG has continued on from its predecessor is its use of highly fetishised imagery in many of the scenes that represent the greatest terror. This comes across as being quite sadistic (as in “in the likeness of Marquis de Sade”) in tone, where the women (in particular) are contorted into poses that depict equal parts extreme violence and erotica. There’s a lot that can be unpacked here. For one thing it is basically only women that get the sexualised deaths, while the men tend to simply die gorily. This is NG remaining true to the genre (particularly with regards to Japan and the yurei tradition), but certainly that’s an element of the horror genre ripe for deconstruction and analysis. For my part I appreciate the presence of this stuff simply because it’s rare for games to acknowledge the link between sex and horror that has been present in other mediums as far back as Dracula. However, if I was to split hairs I would say that NG isn’t quite as creative in its sadism. I don’t think I’ll ever quite push the vision of one girl in Death Mark, stripped to her underwear and being enveloped in rose thorns as she’s pinned to the ceiling. NG didn’t have an image quite that eye-opening, though that really is splitting hairs. If I hadn’t played Death Mark I would be writing NG up in the exact same context that I wrote its predecessor up as.

NG is a a visual masterpiece, even by comparison to its predecessor. Experience Inc. has an incredibly talented art team, and the detail in environments, characters and monsters is the kind of thing that you’d expect to see at a (particularly dark) art gallery. In other areas the game might, at first, seem to be showing a limited budget. For example, animation is minimal at all times, and people used to the Live2D-supported visual novels that are rapidly becoming standard might find NG a rather… still experience. On the other hand, that in itself is thematically appropriate, since the chilling atmosphere of a yurei painting comes from its ethereal stillness. Certainly you’ll come away from NG with the impression that there’s no way anything that you see within the game is not deliberate – it is one intensely controlled experience, from start to end.

Ultimately, what puts NG ever so slightly ahead of its predecessor is the writing and characterisation. With the first time around, Experience Inc. was finding its feet with the genre, theme, and tone. NG comes across as a far more refined, experienced production. Characters are pitched perfectly, and the ebbs and flows of tension, comedy, mystery, sheer violence and eroticism are structured and balanced as well as we’ve ever seen – not just across video games, but the entire horror genre across all media. 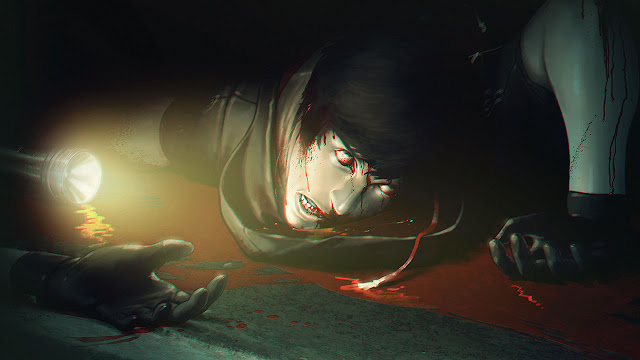 As a student of horror, Japanese culture and its storytelling tradition, Spirit Hunter: NG offers an experience that seems almost custom tailored to me. It’ll be niche to the broader audience. After all, most popular examples video game horror emphasize action or, at the very least, violently powerful entities that have been designed to shock and make the audience jump. The idea of a quiet little horror game that digs in with an unsettling aura and creates its fear through empathy and sympathy for the monster, rather than a revulsion to it, is almost quaint. And yet, niche and quanit as it might be, Spirit Hunter: NG is a far more effective, intelligent and deep horror experience than all the jump scare games out there combined.

(I wish I could give it more)