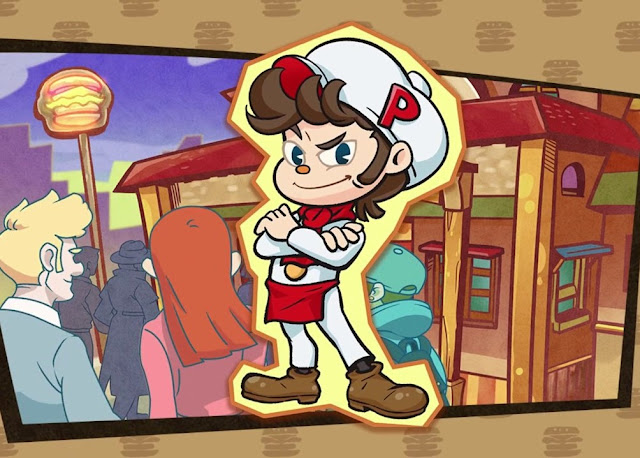 As the name would indicate, BurgerTime Party! is an updated take on the classic game that released all the way back in 1982. A lot of the same elements make their return, but with some jazzed up visuals, music and stage layouts. This is not the deepest of arcade remakes, but there is enough variety applied to a still-entertaining arcade premise to enjoy.

Related reading: Our review of BurgerTime World Tour, the previous attempt at modernising the classic.

I remember the original adventures of Pepper Pete from a few decades ago, with a basic premise of varying platforms, with layers of a burger that you walk across to force them to drop down a layer. Ladders up and down between the levels to avoid various enemies with apt names such as Mr. Hot Dog and Mr. Pickle, who apparently hate a good hamburger. Pepper Pete’s only defence is a limited number of pepper shots he can fire a small distance from himself that momentarily stuns his opponents and allows him to pass through them. The only way to actually knock out said hamburger-hating enemies is to drop a slice of burger onto them from above as you try to navigate through six stages.

BurgerTime Party! runs with this basic premise, adding some interesting new elements to the mix. The most notable change is in the level design. Aside from just having more levels to work with, they now have some quirky new elements such as conveyors and adjustable platforms. The primary objective is still to build burgers, but given the more creative level design, the secondary challenge of trying to create combination drops from above onto the heads of our returning antagonists (now with more Mr. Doughnut in the mix) helps you to score the big points. This really plays into the verticality of the level design, which is much taller than the original stages, and introduces some pretty entertainingly crazy combo hits if your timing is right. 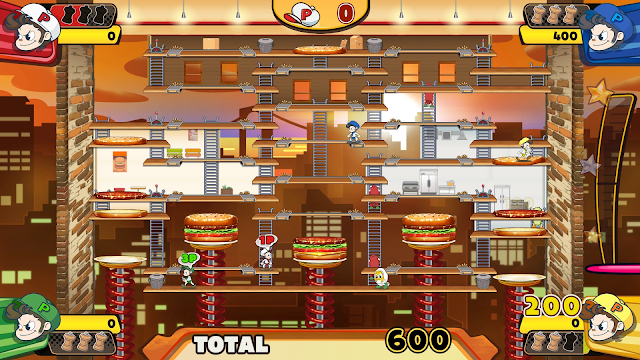 One major difference is the addition of co-op. The original game is simply a single player affair. Sure, you can throw an extra quarter or token into the arcade machine and make it a head-to-head competition, but in reality you are just taking turns to see who can score the most points. I have a location combination bar/arcade with some old-school pinball machines and arcade cabinets, and the original BurgerTime is one of those. It is my wife’s favourite arcade machine, and she bests me more often than not, but it is a bit of standing around watching the other play.

Here in BurgerTime Party!, there is a single player mode that feels a bit more like a puzzle game as you try to make use of the limited ingredients to try and unlock medals and is a pretty good take on the classic recipe. Co-op lets up to four people go at it simultaneously and it really is a good deal more chaotic. There is also a multiplayer battle mode that lets two to four players try to take one another on. It is actually pretty impressive how many modes the developers were able to squeeze out of such a simple gaming premise, though I think my favourite is just the standard single player one. Still, it has been fun to play the multiplayer modes with my wife, even if she is still apparently better at this updated version of the game than I am.

In terms of the overall presentation, the audio and visual cues are pretty much what you would expect. Peppy (peppery?) little tunes play in the background, and visually the stages are not only bigger, but often times loaded up with more enemies to make things more challenging. There is a strong old-school animation vibe to the game that kind of reminds me of Cuphead with its bright, vivid use of colours and exaggerated faces right down to the comically large eyes and snarls of the enemy food items in their portraits. The backgrounds are not nearly as sharp as what Cuphead has to offer, but all in all the aesthetic manages to feel both old-school in inspiration while still quite advanced compared to how BurgerTime originally looked. 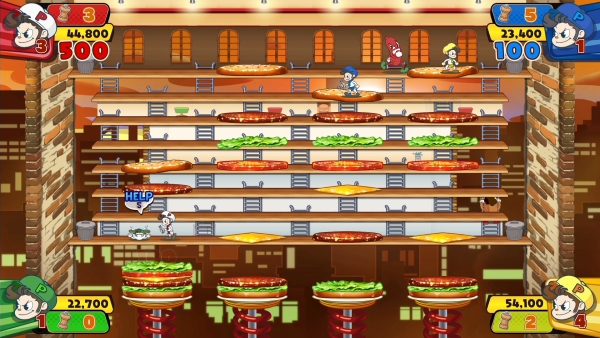 All of these pluses being said, BurgerTime Party! does not have online multiplayer, which is a missed opportunity. Additionally, there is really no narrative, and while the stages evolve and become more interesting (especially in the solo mode), the gameplay never really progresses. So while it is pretty impressive that the devs were able to come up with some different modes for the gameplay, the fact of the matter is the gameplay itself is somewhat on the shallow side.

BurgerTime Party! should scratch an itch for those who remember and enjoyed the classic BurgerTime game the way I did, with more levels, modes and a pleasant presentation. It makes a fun enough diversion, even if your enjoyment will probably taper off after a handful of hours, because there is no real story to chase and the mechanics of the game never really progress into anything more than their initial hook. Does that justify the game’s rebirth? It probably depends on who you are. My wife and I are enjoying it in short bursts, but it is doubtful that BurgerTime Party! ever becomes considered the classic that the original was.