When Dr. Kawashima’s Brain Training for Nintendo Switch was announced for Japan, I was nearly gleeful. But now that it’s confirmed to be coming West (on January 3, 2020) I’m downright glowing with anticipation. Here’s what to expect from the brain training game:

Dr. Kawashima’s Brain Training series was renamed to Brain Age in North America, but we don’t yet know if that will be the case for this title, as only Japanese and European launch dates have been confirmed.

Dr. Kawashima’s Brain Training combines classic tap-answers with the Switch’s technology, namely the removable Joy-Cons not available on the Nintendo Switch Lite. That being said, the game will be playable on the Lite, just some activities won’t be available. Challenges include finger calculations, rock paper scissors, word scramble, photographic memory, dual task, and more. You can calculate your Brain Age Score by performing back-to-back exercises.

The first chapter of Corpse Party 2: Dead Patient is set to launch in Western territories for PC (via Steam, GOG, and the Humble Store) on October 23, just in time for Halloween! 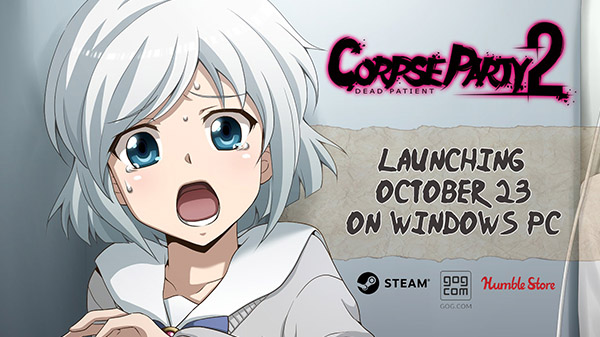 The game brings the player away from what is familiar in the original Corpse Party series, and places them in a hospital named Amare Patriarcha Crucis. Ayame awakes from a coma and must explore the hospital, solving puzzles and collecting medical charts while avoiding zombie-like creatures.

Originally available via Apple Arcade, and a few days later for PC, developer The Gentlebros and publisher PQube have announced that Cat Quest II will be available for Nintendo Switch, PlayStation 3, and Xbox One on October 24.

Cat Quest II tells the tale of two kings, brought together against their will, and of a continuing war between the cats of Felinguard and the dogs of the Lupus Empire. This time around, players will play as both cat and a dog while exploring their respective kingdoms and attempt to reclaim their thrones.

There are new weapon types, new spells to master, and new passive abilities available to the player. And like the original, expect a barrage of side quests to keep you busy for hours upon hours.

Set in the same thematic universe as Funcom’s Secret World Legends, Moons of Madness puts players into a state-of-the-art Mars research outpost. The outpost exists specifically to decode a mysterious signal that has been coming from the red planet. Take a gander at a trailer:

The player takes on the role of Shane Newehart, a technician at the outpost whose security clearance doesn’t afford him knowledge of the signal; instead, his entirely job is to keep the lights on until a transport ship arrives with a new team to take over. The problem is, Shane discovers setbacks best described as unusual, and he begins experiencing visual and auditory hallucinations.

Moons of Madness launches for PC this month, on October 22. It will be coming to PlayStation 4 and Xbox One on January 21, 2020.