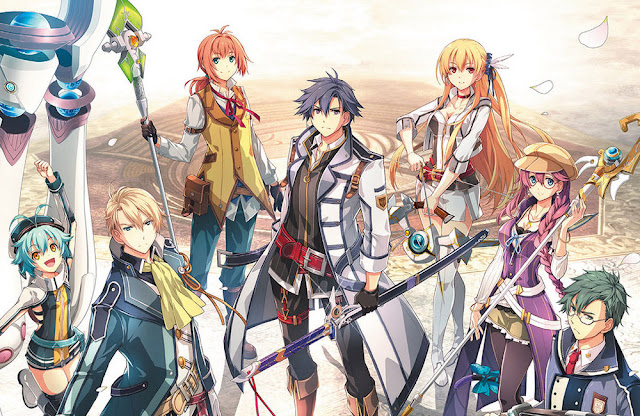 I know I keep saying this to anyone who’ll listen, but the Trails of Cold Steel games from Nihon Falcom are brilliant. Even among JRPGs, few games manage the intricate characterisation or deep world-building that Cold Steel delivers effortlessly, let alone both at the same time.

Related reading: Our review of the very first in this series – and a really important place to start to get into the whole series.

Trails of Cold Steel and Trails of Cold Steel II never really felt like a game and its sequel; rather, they felt like one particularly lengthy story that was cut in two for the sake of necessity. If you played to the end of Cold Steel without knowing there was a second game right behind it, you’d probably come away somewhat disappointed at how incomplete the “ending” it delivered. But that’s just because it’s an intermission more than an actual ending, with the second game delivering the latter half of one continuous, grandiose story.

By contrast, Trails of Cold Steel III feels much more like an actual sequel. Cold Steel II left plenty of loose threads, but it built up to a much more conclusive and satisfying ending. It saw the Erebonian civil war that served as the backdrop for the first two games finally brought to an end, and Thors Military Academy’s Class VII—who were at the centre of the first two games—finally graduating, closing the curtains on the student chapter of their lives. 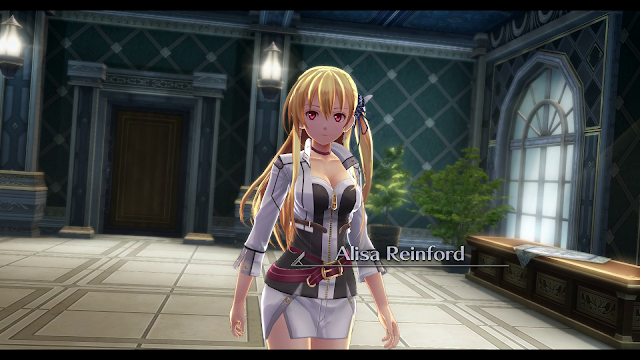 Trails of Cold Steel III, then is a new beginning. Taking place a year or so on from the end of Cold Steel II, it sees Cold Steel series protagonist Rean Schwarzer starting his new job as an instructor at the newly-established Thors Branch Campus. By a stroke of coincidence (or is it?), Rean finds himself in charge of a new, much smaller Class VII. That’s not to say that the original Class VII isn’t present; you’ll gradually reunite with all of them over the course of the story and ultimately find them all join your permanent party once again. But they definitely play more of a supporting role than Cold Steel III’s new stars.

It’s odd, after how much time and effort the first two games put into getting audiences emotionally invested in the original Class VII, to suddenly have a bunch of unfamiliar faces hogging most of the screen time. To be honest, it took a long time for me to warm up to them—not because of any flaw in their characters, but because they weren’t the people I knew and loved. It probably didn’t help that you don’t reunite with any of the old Class VII until quite a few hours into the game (and Sara Valestein, the best of them all, until much, much later). Nor does it help that Cold Steel III leans heavily on returning characters from Zero no Kiseki and Ao no Kiseki, two games from the wider Legend of Heroes series that have never officially been released in English.

But once everything clicked into place, it really clicked. The members new Class VII are a natural fit among the old ones, being a similarly eclectic bunch from similarly disparate backgrounds that give them similarly unique positions within the sociopolitical climate of Erebonia. But they also bring a new dynamic, as you witness them working to find their place in the world not from the perspective of a peer, but of a teacher who’s trying to help them find their path. 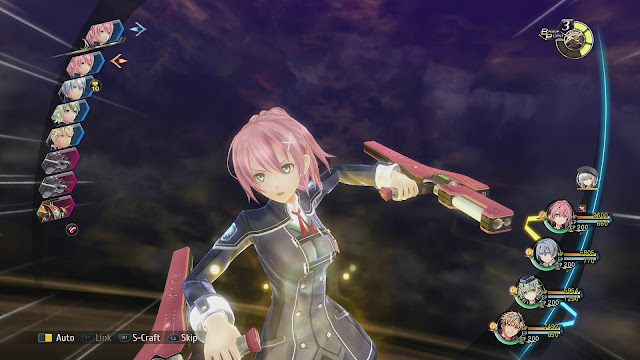 They’re also key to one of Cold Steel III’s major themes: imperialism. In the wake of Cold Steel II, with the civil war ended and a particularly ambitious individual taking charge, the Erebonian Empire resumed its goal of expanding its territory and might by annexing neighbouring provinces, typically by means that seem “peaceful” on the surface but, in reality, are anything but.

One such province is Crossbell, a technologically-advanced city that had enjoyed a few short years of independence until the Erebonian Empire launched a surprise invasion and managed to take hold of the city within the space of a day. Juna Crawford, one of the new Class VII students, is a proud Crossbellan with a deep, understandable dislike of the Empire. Through Juna, Cold Steel III takes an uncompromising look at how imperialism affects the invaded, even when said invasion is “peaceful”—how culture and national identity are forcibly eroded, and how assimilation is assumed to be the solution to everything.

Through other characters, we see an even shadier side to the Erebonian Empire—who, it’s worth remembering, Rean and everyone else is working for, whether directly or indirectly. When “peaceful” invasion doesn’t work, an empire will turn to subterfuge and backroom deals to manufacture conflicts and create a necessary pretext for a declarations of war against much weaker nations—the perfect opportunity to then invade and take over in the name of self defence. 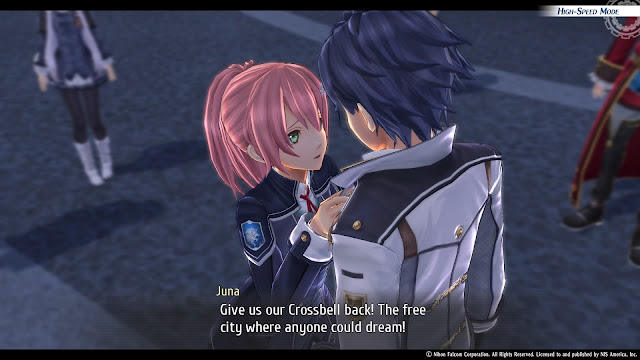 It’s serious, hard-hitting stuff, but true to the series’ style, it’s handled with nuance and care, and balanced out by plenty of levity. This is still a coming of age story about a group of teenagers trying to find their place in the world, and with that comes plenty of humour, adolescent awkwardness, high school drama, and heartfelt moments. The writing, in particular, does a fantastic job of delivering on those emotional highs and lows. Again, a lot of RPGs tend to focus on either grandiose, complex plots or intimate characterisation; few manage to do either of those things as well as Cold Steel does both.

The game that carries you through all this remains largely unchanged, mostly because the first two Cold Steel games already had a deep battle system and rich RPG systems that aren’t broke and don’t need fixing. Even so, Cold Steel III brings a raft of small tweaks to the established formula that help make things smoother and more convenient than ever.

There are two significant new additions to the battle system, that both open exponentially more tactical possibilities. Firstly, Brave Orders: previously, the only way to spend Brave Points—earned by successfully landing linked attacks with paired-up characters—was on more powerful team, based attacks. With Brave Orders, you have the option of instead using those points for very powerful party-wide buffs, and initiating these Brave Orders doesn’t use up a turn. 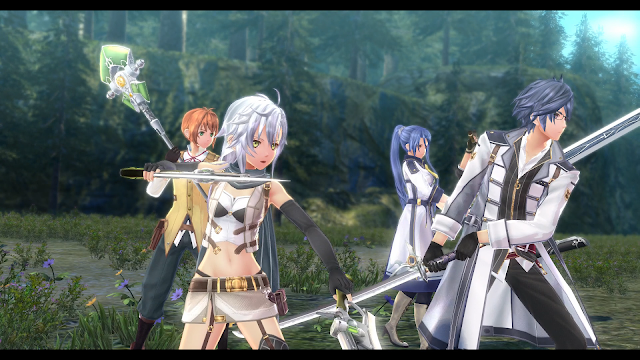 Secondly, the new Break system sees every foe (and party member) with an additional “Break Meter” that, when depleted, will cause that character to be “Broken” until their next turn. As well as reduced defence and the cancellation of all buffs, any attacks directed at a broken character are guaranteed critical hits (and in Cold Steel, critical hits are strong). Gunning for breaks is a very viable strategy, and adds another layer to an already deep battle system.

Outside combat, Cold Steel III comes with a few very welcome quality-of-life changes that really help to streamline the game. The High-Speed mode seen the PC and PS4 ports of the first two games is present here too, giving you the option of speeding up the whole game—battles, exploration, cutscenes, everything—at the press of a button.

But perhaps the biggest change, and the most welcome, is an expanded fast-travel system. In Cold Steel and Cold Steel II, when you were in a town, you could press square to bring up a shortcut menu that would let you teleport to any landmark within that town that you’d previously visited. In Cold Steel III, that same system is expanded beyond towns to every map within the region you’re currently exploring. What this means is that if you, say, need to go to a particular field or dungeon map in search of some particular item for a quest, provided you’ve already been there, you can just fast-travel there, grab the stuff, then fast-travel back. 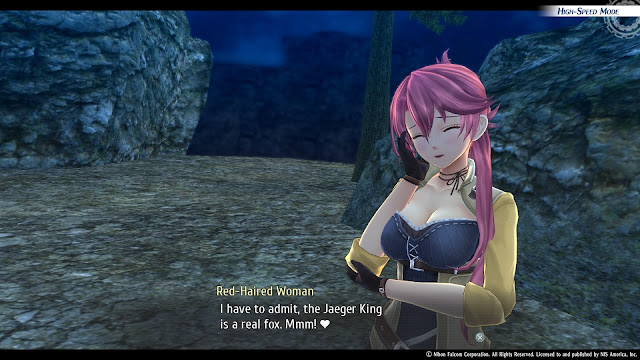 There are still some limitations to it, mostly to avoid it breaking story progression. For example, if the game requires you to cross a particular zone border to trigger a story cutscene, it won’t let you fast-travel past that point. Likewise, you can only travel within the area in which the current chapter of the game takes place. But even with those restrictions, it makes a world of difference in a game that can otherwise involve a lot of back-and-forth.

Essentially, Trails of Cold Steel III is just more Trails of Cold Steel, but with a bunch of new characters, some new ideas for the narrative to explore, and some welcome design tweaks. I mean that as an absolute compliment, though—Cold Steel and Cold Steel II are two of the best JRPGs in recent memory, so having more of the same is hardly an issue. I’m still not entirely sold on the idea of the original Class VII being pushed to the background for much of this game, but the new Class VII are fantastic additions to the roster who bring a lot of new ideas with them.

If you like JRPGs, this is another one you don’t want to miss—just hope that Cold Steel IV gets a Western release before too long, because this one ends on one hell of a cliffhanger.

The greatest video game arcade of all is closing soon…