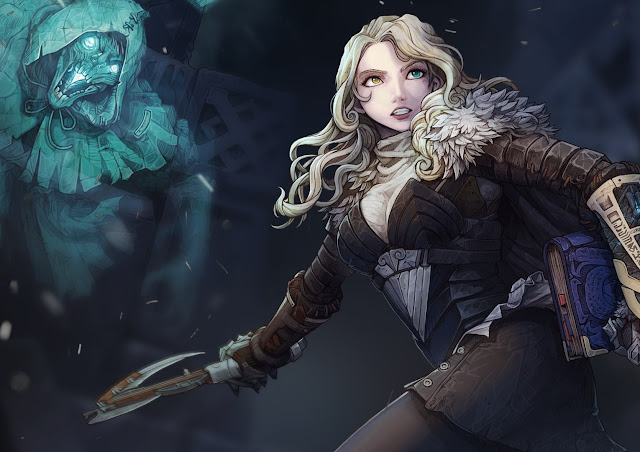 Sometimes a game comes along that is so derivative that it’s almost impressive that the developers would be that brazen about it. The developers of Vambrace: Cold Soul were so clearly inspired by Darkest Dungeon that they’ve made a fan version of Darkest Dungeon. Albeit a very chilly one, and the change in aesthetic is gorgeous. I’m just not sure that the team entirely understood what made Darkest Dungeon so impressive.

Darkest Dungeon wasn’t just a difficult, dark-themed “roguelike.” It had those elements courtesy of its random dungeon levels, and the way that death and general suffering was an inevitability for the heroes. That was just the surface of Darkest Dungeon, though. Underneath was an intense effort to reflect the stresses of the adventuring life, with characters picking up all kinds of mental afflictions and distresses based on what they experience and do in the game.

Vambrace doesn’t have those elements. Rather, it’s a more straightforward roguelike, with random levels that you’ll explore over and over again, making it a little further each time, but dropping back out to town every time the situation gets too hairy. There you’ll recover your characters again, and give it another crack. 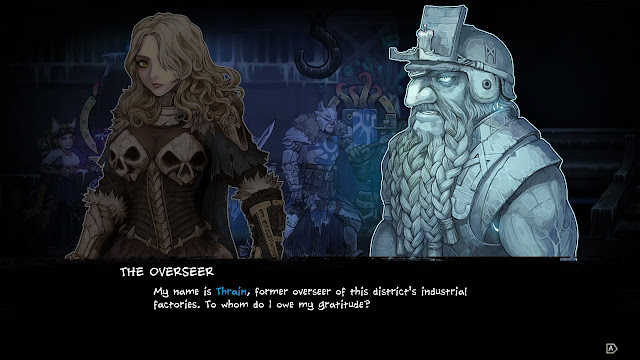 There’s nothing inherently wrong with that loop, and it has served game developers well for decades now. It’s just that there’s also nothing inherently creative or original about it. The developers want to convey the depressing nature of the world – essentially you find yourself in a frozen ruined city where those inside are trapped by a wall of ice that kills a person that touches it. Your character wears an vambrace that allows her to traverse the wall, and naturally she is destined to be the liberator for the town. Over and over again the game tries hard to convey the miserable existence of everyone, but within a few hours you’re carting loot into town at a rate that would destabalise the economy, and you’re equipped out with enough firepower to level a small city.

Inside the dungeons themselves there are some nicely creepy events and traps to deal with. Whether it’s a ghostly meal just sitting there, tempting you into eating it, ghostly merchants (there’s a lot of ghosts in Vambrace) or bands of bandits to deal with, every area that you visit will have one of four possible encounters – a combat encounter, one (or more) traps, a room full of treasure to loot, or a campfire, where you can rest your party up. Individually, each encounter is done nicely (and thanks to that art style looks gorgeous), but there aren’t nearly enough of them for a game that asks you to replay the same areas over and over again. There’s only so many times you can come across the same ghost girl asking the same question about whether you like candy or chocolate for the atmosphere to wear thin. Each new area brings new encounters… but again, with the expectation that you’d play them over and over again. Without the additional strain of having your characters descending into PTSD-driven nightmares, Vambrace settles into being a grind far too easily for its own good.

Combat is simple and elegant. Regular attacks give your character points, which can be used for more powerful special attacks. Taking a range of different characters into battle offers plenty of strategic options, though combat shifts from being so easy that you won’t bother with the special abilities to so difficult that it doesn’t matter if you use them with the tactical brilliance of Napoleon, you’re not getting out without a world of pain first. It’s always the problem with random design – there’s always the chance that you’ll have the unfair through to the impossible thrown at you, and with Vambrace that happens just a little too often. 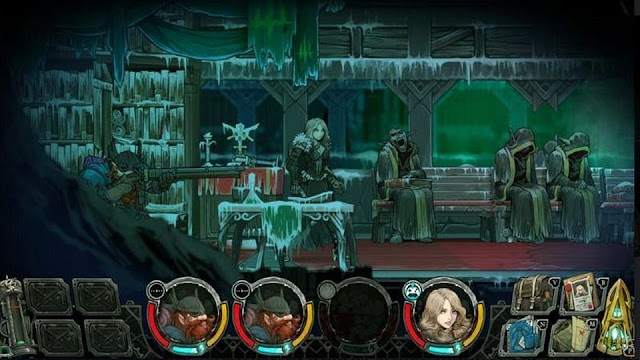 Despite its many flaws, Vambrace is passively playable – and I don’t mean that in a pejorative sense. Characters move at a sluggish pace across small areas, which is a strength rather than a weakness, since it allows you to enjoy the incredibly high level of detail in those characters, and – of particular value to the Switch version – allows the game to be played while watching television and the like. I was never so engaged in Vambrace that I felt the need to focus all of my energy on it, and sometimes, that’s okay. It’s good to have something that can simply occupy some time.

There’s also a classic Dungeons & Dragons vibe to the game that I found highly appealing. Some will find the cold-world equivalent to chainmail bikinis grating (basically, the women are covered up against the cold, but lord almighty does their armour give their boobs some push-up support). It’s appropriate to the ’80s and ’90s RPG aesthetic, however, and the pinup style of fantasy art back then is most assuredly art. The layout of dungeons, though randomised, also carries that nice sense of a succession of rooms, which is the essence of Dungeons & Dragons action distilled too. Darkest Dungeon did all of this too, but Darkest Dungeon also took steps to be modern and aware of the action. It’s ironic that the same reason that Vambrace is not as engaging or thought provoking as Darkest Dungeon – that it lacks the same sense of awareness – is also the reason it’s a better simulation of the classical Dungeons & Dragons game night.

Vambrace: Cold Soul is by no means a bad game. It’s far too derivative and simple to reach the same league as Darkest Dungeon as a classic, but it’s an enjoyable time waster, with superb production values and neat, clean, classical turn based combat action. The best way to play the game is probably on the Nintendo Switch, too, since it’s the kind of background noise that works while you’ve got the sport or a movie on TV.