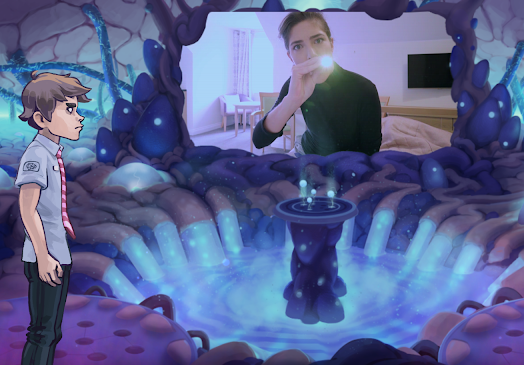 The brain truly is a phenomenal organ, providing so many answers yet also creating so many more questions about its function. And the brain, like skin, has a tremendously important ability to self-heal. It’s truly quite incredible, and for that reason Headspun becomes a game at which to marvel. Set inside the brain of a trauma patient, coming out of a coma after five weeks unconscious, the game explores themes of healing while being set in one of the oddest location of any game I can think of. Think of Headspun as the Inside Out of point-and-click titles; there’s a bunch of characters in another character’s head, controlling emotions, healing, and actions.

Related Reading: I explore ideas of nature versus nurture in my opinion piece on Life Is Strange 2, Episode 4.

Headspun is set in Theo’s brain. Ted wakes up from a night at the bar in Theo’s brain, feeling more hungover than he ever had before, only to find Theo’s brain is in shambles. There are dead employees scattered about, fires ablaze, and broken doors everywhere. Oh, and Ted’s been out cold for five weeks, not one night. With his brain out of commission, Theo was in a coma. Once Ted is awake, he can reboot the Cortex and awake Theo. Theo finds himself in a hospice room, with a neurologist quickly there to explain what happened.

The Cortex controls Theo’s cognitive processes and decision-making abilities. As they sing in The Baby-Sitters Club Movie, “the brain, the brain, the center of the chain.” Everything that happens within the brain has a direct tie to what the body does. And of course, brain injuries can severely impact memory. Theo hasn’t just lost memories of the last five weeks; long-stored files spanning two decades are missing from the Memory Bank. You’ll need Ted to get Theo to ask the right questions, and the memories could come back. They’re all related to a specific theme… perhaps Theo’s so-called best friend. He’s a creepy one, him. 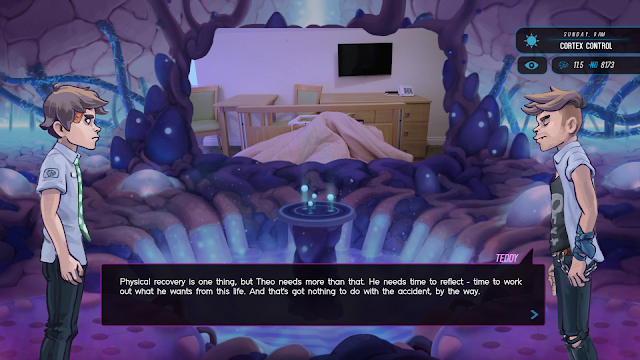 Ted isn’t the only employee of Theo’s brain. Two others survived the incident, including Teddy. Teddy is the angry punk version of Ted and uses great slang like “bellends.” Despite his hardcore exterior, I can tell his insides are all soft and fluffy, because he deeply cares about Theo’s happiness. Ted and Teddy argue daily in Cortex control; Ted things Theo needs to stay the path and work in finance, but Teddy believes Theo should follow his artistic inclination. This is the type of life decision that many of us have had to make through adulthood: sometimes making money is more important than pure happiness, unfortunately. We can’t all live on happiness alone.

The idea of a “broken” brain is something I am very familiar with, although in my case it’s due to emotional trauma versus the physical trauma experienced in the game. Regardless of type, trauma requires rest and time to heal. Headspun represents this by having each day be the workers’ shift in the brain. Some workers function behind the scenes, while others are at the forefront directing rest and recovery actions.

Ironically, some of my past trauma was triggered by an outside force as I was set to review Headspun. My reaction to being severely triggered tends to be anger, as it throws my life off track for days, weeks, or even months. But Headspun became a welcome reminder that it’s okay to take several moments of rest in a day, or that sometimes you just need time to let the background workers do their thing. The game is based on a physical injury, but can also be seen as a guide to good mental health. 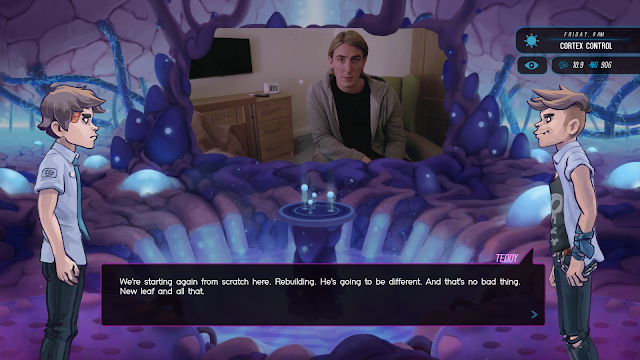 At one point, the game philosophically questions, “If you took away every single memory a person has accumulated over their life, does any sense of the previous personality remain?” This is nature versus nurture at its finest: if you were raised differently, how different would your personality be? There will always be traits from birth that never waver, but life experience creates so much. The point is, trauma can affect your brain is ways you may not even realize. It’s at the point that nurture can be so important to regaining function.

Headspun is the most incredibly baffling mixture of FMV + point-and-click + management sim, and somehow the combination is pure gold. With each shift, the player decides how to spend the day. This directly impacts Theo’s recovery by deciding what he does, when and how he does it. In any given day, you’ll do a combination of resting, sleeping, and mild activities. Each activity, such as reading, crossword puzzles, and sudoku, is its own mini-game. As Theo rests and recovers, you earn Neurocredits to spend hiring new staff from the subconscious to replace our dearly departed friends, or repairing parts of the brain damaged by the trauma. This means that the Cortex is, at the end of the day, a business. Ew. I mean, I do kind of get it, but ew nonetheless. The overall goal is to increase the Cortex Power to unlock new areas and features within the Cortex. Essentially, we’re retraining Theo’s brain to function as close as possible to how it was prior to being temporarily shut down.

Unfortunately, the interface is quite buggy, and at times stops functioning altogether for several moments. Other times, menus won’t select options. And the worst is the times that the interface stalls in popping up at all. There are also some continuity errors in the FMV scenes, such as one person wearing two outfits in one day (the doctor could always just wear a lab coat, an easy way to avoid this), or the same clip looping. I’ve seen the doctor bring in more trays of identical takeout than I can count. 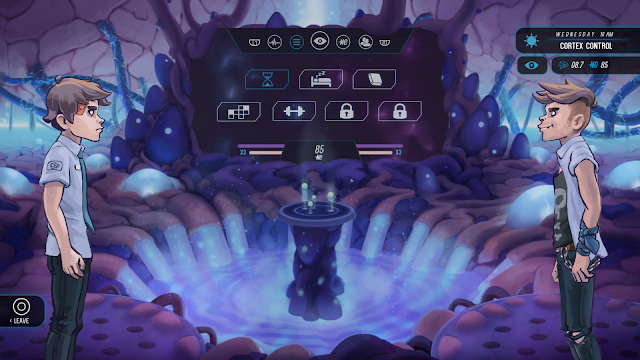 Those two things, the interface and continuity, were the worst of my complaints… until I entered the Memory Bank for the first time. There are no text size options, but the Bank contains pages and pages of tiny, barely-legible text that is imperative to the narrative. No text options seems to be my most recent, biggest pet peeve, and it occurs an awful lot. Accessibility matters, people. Text size options. Audio voiceovers. ANYTHING to make your game playable. Yes, it costs cash, but darned if it doesn’t matter. It’s important. Players need to be able to understand what they’re playing.

Wales Interactive has quickly become the publisher of excellent FMV titles. Headspun, developed by Superstring, is no exception. It is incredibly creative in its use of live video, and is this incredible combination of FMV + point-and-click + management sim. Who knew that could possibly work without being too bloated? But it’s all seamless here (okay, minus the bugs). Headspun does a wonderful job of explaining brain trauma without being a textbook, and personally is a welcome reminder that trauma can linger, but we can still recover.