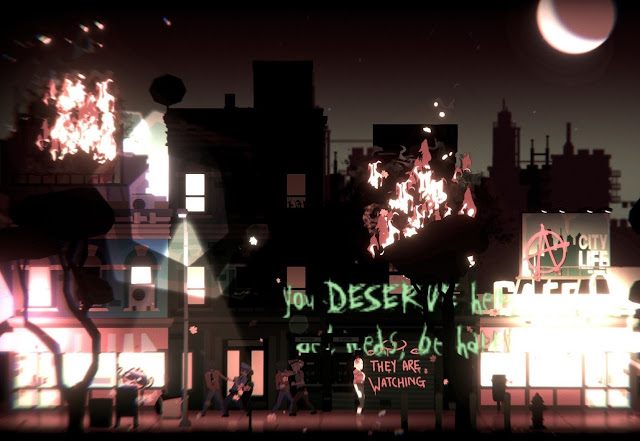 Papers, Please is a masterpiece that will endure on for its ability to put you in a position of moral hopelessness. Playing as an immigration official, you need to make sure the right people enter your country, and that those people have the right paperwork. Your family’s well-being depends on this. But then you start hearing the desperate stories of people for whom getting into your country is a life-or-death matter, and the game’s great ability is how effective it is in making you want to break the law to let them in. Headliner: NoviNews tries to do emulate that kind of experience, only by casting you in the role of the editor of a newspaper.

Related reading: Our look at Papers, Please, which Headliner draws so much inspiration from.

At a time where the media is under attack from all angles, Headliner is timely. As editorial lead, the headlines you run can shape public opinion on a wide range of topics, from a new alcohol-like drug, to the role of the police, healthcare, and political environment. The dictatorial totally-not-Trump is out there castigating you every time you run a headline that isn’t a glowing celebration of his narcissism and xenophobia. Defy him often enough and the head of the newspaper will be arrested and a new “manager” inserted to make sure you do your job right. Support the president, however, and racism spills out on to the streets, and your dark-coloured foreigner co-worker (and love interest) faces ever-nastier depths of bigotry.

Champion globalism and the local corner store faces such stiff competition from the multinational supermarket that moves into town that he resorts to stocking ever-shadier products in a big to support his daughter. Run positive stories on the alcohol substitute and they’ll flush your newspaper with sponsorship cash, but your brother has an addictive personality and… 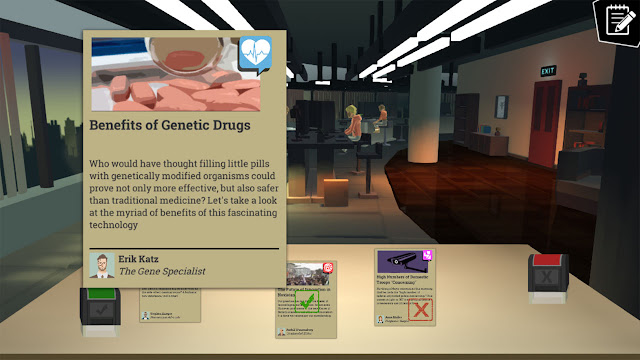 Every newspaper article that you run in Headliner has a series of impacts on a world around you that inevitably sees it fall into one kind of dystopic hellhole or another. This is both the game’s greatest strength and its greatest weakness. On a purely emotional level, Headliner is indeed a game of hard decisions and harder consequences. Watching the city descent into riots, develop a fascistic-style police force (swarms of drones and all), or seeing people dying on the streets because they can’t afford the medicine when your newspaper didn’t do enough to put pressure on the prices is affecting. The art style is simple enough, but the events have such an impact that it’s difficult not to empathise with them and their relation to the socio-political tensions in the western world.

On the other hand, the game does stink of a couple of things – firstly, it’s hopelessly overeager to blame the media for everything that goes on. In Headliner, every riot and every dead person is pinned entirely on the headlines your paper runs. While I’d be the first to argue for the ongoing value and importance of the media in shaping discourse, in the really real world, the argument that the media is that dangerous is the kind of nonsense that Trump loves to pull. The real villains out there are the likes of Silicon Valley, with its algorithms galvanising mob mentalities and anti-intellectual discourse. Alternatively, governments run their own propaganda campaigns (very rarely related to any kind of truth), while the vested interests at the top of Hollywood, Netflix, Disney and other media platforms subtly work to shape culture around particular ideological positions. Simulating all of that is well beyond the scope of Headliner, I know, and I believe the developers went into this game without any particular malice, but in over-emphasising the ability for the media to shape attitudes, this game turns the media into a scapegoat and… well, that’s a counter-productive thing to do in today’s social context.

The other issue is that the binary decisions that you need to make simplify issues down far too far. For example, you might decide to champion universal healthcare, but if you flick that particular switch on, the lineups at medical centres instantly become unmanageable in their length. Headliner comes across as a game of hyperbolic strawmen – to adopt a position is to see the world fall into chaos with the consequences of that position. Not only is this disingenuous debating form – and make no mistake, Headliner is “simulating” a range of critical debates to our society – but it also makes for very clumsy gameplay. Papers, Please was subtle enough that you couldn’t be sure of the full implications of what’s about to happen if you make a particular moral decision. With Headliner, you make every decision knowing full well how that’s going to play out the day after the newspapers hit the stands. 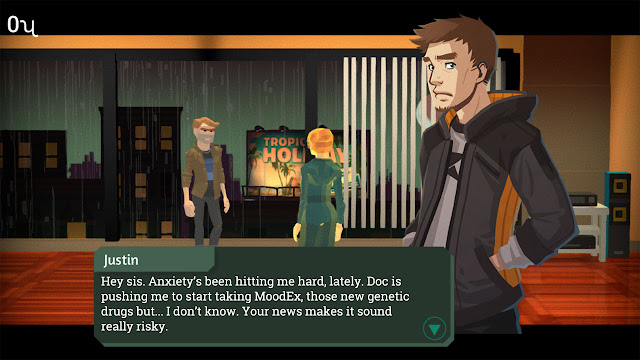 There wasn’t a moment that Headliner surprised me, in other words. It tells of a story of extreme alternatives with no room for nuanced discussion or decision making. The path to the “good” – or perhaps “least bad” ending is clear after you’ve played it through once. Perhaps this is part of the point. There’s certainly valid criticism in the way that modern journalism promotes debate through soundbites and slogans, narrowing too many issues down in the exact same way that this game does, but this game seems to be arguing for centrism by suggesting that “both sides” result in some kind of major negative change… and no. That’s not the solution.

I got tired of Headliner much more quickly than I wound down my time with Papers, Please. That game had the capacity to shock through its unpredictability and the capacity to make mistakes. You could accidentally assess the validity of a person’s papers wrong, and find yourself in really hot water from it. Headliner has no mechanic to allow you to make mistakes – you make decisions and they have consequences, but the alternative decision has consequences as well. After the first play though you’ll replay it for different narrative arcs and endings, but the rich commentary in Papers, Please that was conveyed through the gameplay itself feels conspicuously absent here.

I admire what the developers were trying to do with Headliner. It might be under siege, but journalism continues to fulfill a critical role in society. A game that explores the many and varied tensions that media outlets need to juggle is one way to demystify the media for people who are, increasingly, told outright lies about what the media is and what it should do. Sadly Headliner’s lack of depth, subtlety and nuance undermines the point that it was driving at. That its core design principle is also so derivative of one of the most lauded “art games” of the last decade doesn’t help it, either.