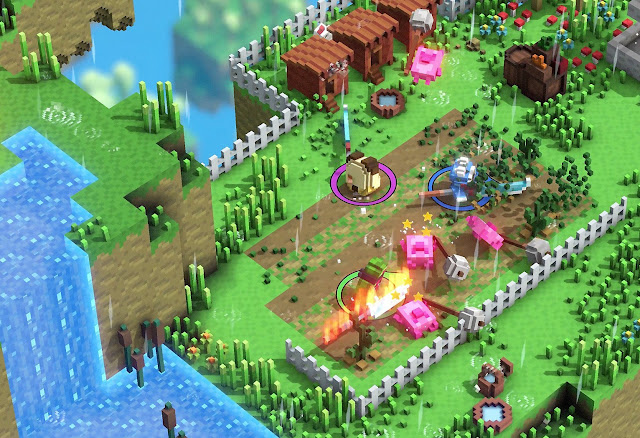 There is a popular saying that less is more. A more minimalist approach can often be more effective. And that certainly seems to be the mindset and ethos at publisher Cococucumber with the release of its latest title, Riverbond. For those that caught a glimpse of Sony’s Nintendo Direct inspired State of Play event earlier this year, you may have noticed Riverbond sandwiched somewhere in between the more major announcements and studio releases. A cute, bright and colourful hack ‘n slash couch co-op game with a smooth voxel art style, which promised a frantic take on dungeon crawling in a world with destructible environments for you and your friends to shoot and slash your way through as you adventure together.

It seemed almost out of place in comparison to its neighbouring announcements which loomed over it and stole the show… like the one with the spiky blonde hair and “we probably announced this too early four years ago but here’s some footage to show you it’s still a thing” attitude. You know what I’m talking about. But there was a certain charming and attractive quality in its simple design that really made Riverbond stand out. It looked gorgeous and entertaining, not to mention the promised crossover skins that would allow you to play as some of today’s more classic indie superstars such as The Kid from Bastion, Raz Aquato from Psychonauts or Shovel Knight from… Shovel Knight. Whilst Riverbond is certainly delightful and aesthetically pleasing in everything from its design, visuals and music, the less is more minimalist and simple approach runs deep within its veins and often detriments the experience more than complements it. Despite its roots in hack ‘n slash and dungeon crawling you’ll find a lot of the pieces that define these genres missing.

There are no worlds to explore or sprawling labyrinths to lose your way in. Instead, Riverbond opts for a selection of eight mini campaigns straight from the start menu with each made up of four or five very short pre-set levels with approximately thirty minutes completion time per campaign. Whilst each one has its own setting, populated with their own unique enemies, ranging from picturesque Japanese inspired gardens covered in cherry blossoms to frozen lands with the bones of giant fallen beasts, the levels that make up the campaigns come with only one single mundane objective which include holding a button to pick up an item, holding a button to read a book or the occasional curve ball where you’ll be tasked with killing all enemies in the area until you reach the final level where a boss fight awaits you. Cute NPCs can be found throughout the levels and provide tidbits of information relating to the current task at hand although very little is useful and can generally be glossed over. Oh, you need me to go around and collect more objects? Shocker. As a result, you rarely ever feel connected or bought into the world each campaign attempts to offer you as you work your way through each one in such a short space of time, and with little driving you to continue, the whole experience feels empty and repetitive. 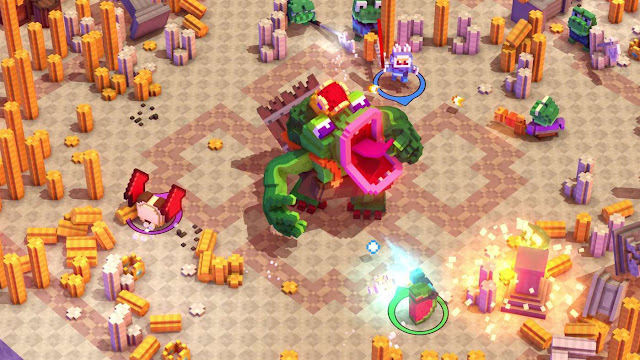 Unfortunately, the combat does little to improve upon the gameplay and although it feels fluid and responsive, there is no element of challenge at any point through its eight campaigns. The destructible environment is somewhat restricted as you’ll find most levels with little more than barrels or trees to destroy with only the occasional level containing some larger structure for you to pick apart. Fighting enemies is repetitive and simply amounts to how quickly you can press a button as almost every enemy is easily defeated with the same combination of attacks. There are new weapons scattered throughout the levels with some on the more whimsical side such as a giant chicken drum stick as well as the traditional swords and spears, however although weapon types have different styles such as sweep, slash or thrust, enemies aren’t susceptible to any particular attack type and there is never a requirement to switch between them. Some, such as the large broadsword weapons with their sweep attacks, are so slow and cumbersome in comparison to lances and their thrust motion (which also deals far more damage), that they are rendered entirely useless and you will most likely find yourself sticking to one weapon throughout a campaign.

I kept a giant foam hand with a slap style attack equipped for the most part of one campaign as I ran around trying to slap some sense into my enemies in the hope it would awaken some dormant skill or challenge, however in most cases I was able to defeat entire campaigns worth of enemies without taking a single hit thanks to the way that enemies get locked into your attack combo. Ranged weapons allow you to take an even easier approach as you sit back and snipe enemies without them getting close to you at all. In fact, the vast majority of deaths that I incurred throughout Riverbond were from accidentally dropping drawbridges on my own head and involved no enemy involvement whatsoever. If you happen to suffer a similar fate or do fall to the hands of your enemies you will be surprised to find that death holds no penalty, simply respawning at the starting location or check point with all progress maintained, providing little requirement to ever stop and consider your approach to any enemy or situation.

Loot is also a thinly applied concept with chests in set locations dotted throughout the map containing the aforementioned melee and ranged weapons with the occasional skin for your character to add to your collection but the range of items to be found is limited. Throughout the levels you will find coins, collectible stars and Zelda-like rupees and I had hoped these would allow me to purchase different items or better equipment but they amount to nothing except increasing your score and serve no other purpose. Unless you are really dedicated to attempting a high score run then all of these can simply be skipped. 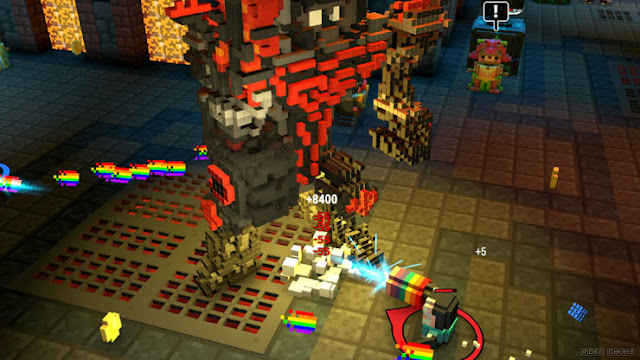 There is no denying that Riverbond has been well executed in its design and many will love its unique eye-catching aesthetics and accessibility, but it falls short of the mark in a number of key areas. With a very short completion time and no replay value there really isn’t much to keep you playing and whilst the lack of challenge may be appealing to those looking for a short game to pick up and play it becomes tedious very quickly. The multiplayer aspect does bring a level of entertainment into the mix as your friends can easily jump into a game as you crowd round the television screen and compete for the highest score, but doesn’t add enough to account for the repetitive nature of Riverbond as a whole. Unfortunately, it seems sometimes less is just less.

Please support me on Ko-fi: Become a Patron!
Share this

A Japanese film you must watch: In The Realm Of The Senses