Japanese cinema has had a long tradition of embracing transgression. From the modern auteurs such as Sono Sion and Miike Takashi, through to the great master of the form, Fukasaku Kinji, Japanese filmmaking and transgression have been so closely linked that the people have even given the loose collection of filmmakers and their work a genre. Japanese New Wave cinema was a major art movement from the 1950s to the 1970s, and it’s most notable because it made embracing taboo material central to its themes. Oshima Nagisa was perhaps not as well known in the mainstream as Fukasaku, but he was every bit as important to Japanese New Wave, and In The Realm Of The Senses is his masterpiece.

In The Realm Of The Senses is a dramatised take on the story of Abe Sada, a real-life figure who accidentally erotic asphyxiated her lover to death, before decided to cut off his penis and testicles and carry those around with her. She was eventually arrested, and the media frenzy around “Japan’s Sade” (Sada was a really convenient name) fascinated a nation that was deep within the throes of nationalism and war, and really needed the scandal that Abe’s story gave them. She got a rather lenient prison sentence (five years or so), and went on to become something of a celebrity for her story.

The film is fictionalised, but checks off the key points in Abe’s story and the descent into destructive sexual obsession. Oshima decided to show this on film through a lot of unsimulated sex – in fact all the sex scenes were unsimulated. Early on it’s tame enough stuff – standard oral sex (complete with the result) and the like – but as the film gets closer to its climax the sex games that Abe and her lover play certainly go places. The film is available uncensored in most parts of the world now, but not in Japan, and that’s because of one particularly notorious scene where Abe’s lover takes an egg and puts it inside of her in its entirety. Again, completely unsimulated.

If that sounds rather obscene, then you’d not be the only one who has thought that of the film. Oshima was even hauled up on obscenity charges over it. Oshima’s own explanation of the obscenity, however, and his defence of it, if you want to frame it in those terms, is a very common argument among transgressive artists for doing what they do. As Oshima later wrote in Theory of Experimental Pornographic Film: “The concept of “obscenity” is tested when we dare to look at something that we desire to see but have forbidden ourselves to look at. When we feel that everything has been revealed, “obscenity” disappears and there is a certain liberation. When that which one had wanted to see isn’t sufficiently revealed, however, the taboo remains, the feeling of “obscenity” stays, and an even greater “obscenity” comes into being. Pornographic films are thus a testing ground for “obscenity,” and the benefits of pornography are clear. Pornographic cinema should be authorized, immediately and completely. Only thus can “obscenity” be rendered essentially meaningless.”

This is much the same argument that Georges Bataille – the leading thinker around transgression and taboos – makes in his work Death and Sensuality: A Study of Eroticism and the Taboo: “Eroticism differs from animal sexuality in that human sexuality is limited by taboos and the domain of eroticism is that of the transgression of those taboos. Desire in eroticism is the desire that triumphs over the taboo. It presupposed man in conflict with himself.”

And as Bataille writes in another work – Eroticism: Death and Sensuality – taboos, or limits, are sociocultral boundaries that need to be broken down. “There is always some limit which the individual accepts. He identifies this limit with himself. Horror seizes him at the thought that this limit may cease to be. But we are wrong to take this limit and the individual’s acceptance of it seriously. The limit is only there to be overreached. Fear and horror are not the real and final reaction; on the contrary, they are a temptation to overstep the bounds.”

What separates transgressive art around sexuality from outright pornography is the intent, Oshima and others argue. Pornography exists purely to titillate – the eroticism is there for its own sake. Films such as In The Realm Of The Senses, or the writings of authors such as Marquis De Sade (one of Bataille’s favourite subjects) are highly erotic, but only in the context of some socio-cultural examination. Sade’s writings were intended as a scathing criticism of the religious and political establishment of his time (he was, after all, a revolutionary). Oshima’s film is likewise politically charged, set as it is against the backdrop of rising nationalist fervour. Oshima was never aligned truly with the left or the right in Japan, but his films universally express a distaste for the authority figures and existing social-cultural structures. 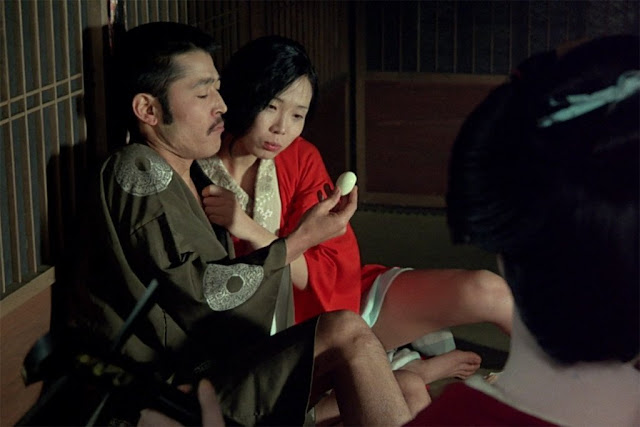 This film, so steeped in the most extreme decadence you can imagine, carries with it a strong subtext of breaking down social-cultural norms and boundaries, and the sexuality and eroticism is the delivery mechanism of that critique. It is, after all, a story about two lovers (one an employer and the other a servant) that do everything they can to free themselves of social class, inhibition, and repression. They do this to the point that their decadence leads to their ostricisation – at one point a servant at the inn they are staying at complains at the stench of the room, which the two dismiss as something “they like.” Eventually the geisha refuse to even perform for them.

As film critic, Joan Mellen, noted in her analysis of the film, “on the allegorical level that the film assumes, all Japanese must live at one remove from contemporary Japanese society to be free of its contaminating feudal influences. Sada and Kichizo flee not merely sexual repression but the militarism of a Japan rushing headlong into imperial conquest; they are in revolt against an entire culture no less than against the mentality that led to war.”

In The Realm Of The Senses is an erotic, sexually-charged film. But it’s not pornographic. At no point is the film intended to illicit the same response from the audience as a pornographic film is. Those films make sex the only focus, and attempt to capture the act in the most intimate terms possible. Furthermore the focus is firmly on the body parts and their interaction. In The Realm Of The Senses, however, distances itself from that. The audience here is an observer, rather than a participant, and the film itself is highly structured, where pornography aims to create the impression of spontaneity.

It’s quite a beautiful film, too. The hazy decadence of where the doomed couple laze their days is a perfect visualisation of the same aesthetic that so inspired ukiyo-e artists about Yoshiwara and the “floating world” of Japanese pleasure quarters. The performances are masterful in what must have been an incredibly difficult film to actually perform through, and there’s an efficiency to the direction that many modern filmmakers could learn a thing or two from. 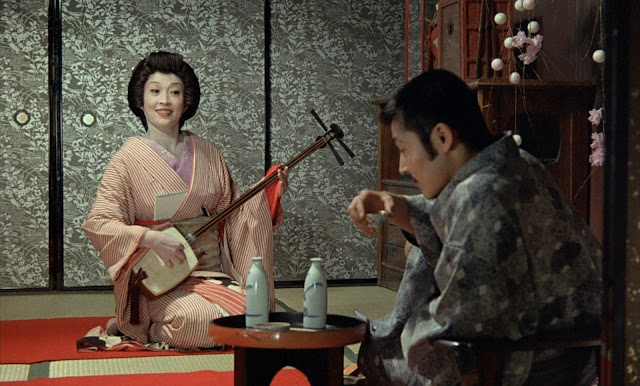 In The Realm Of The Senses is up there with Kurosawa’s library and Tokyo Story as classic films out of Japan that every cinephile really owes it to themselves to watch. To call it “entertaining” would be to do it a disservice. It’s not there to entertain, nor titillate. It’s an unflinching, taboo-breaking look at both sexuality and politics, and it’s the perfect entry into Japanese New Wave cinema.