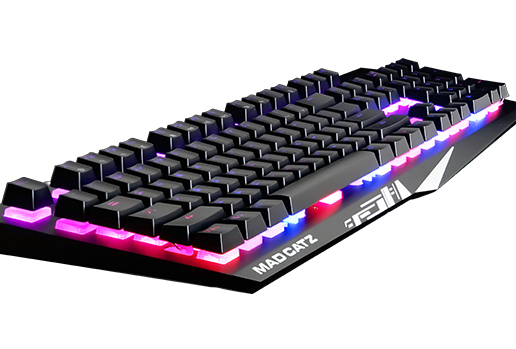 I’ll admit that I shed a tiny tear when Mad Catz went into administration in 2017. It’s not that their products were always the best – although I’d argue that their fight sticks and the RAT range of mice were right up there – but that no other manufacturer offered the same combination of crazy innovations, wacky ideas and kick-ass attitude. The world of peripherals has been a quieter place without them.

But now Mad Catz are back for a fresh start. It’s more of a remake than a reboot, as the new company comes straight out of Hong Kong and has severed ties with Mad Catz’ older, legacy products. Instead, they’re offering an entirely new product range which builds on the design successes of the past and heads out in some new and interesting directions. Judging by the STRIKE 2 Membrane Gaming Keyboard, that’s a very good thing indeed.

The first thing that’s noticeable about the STRIKE 2 is just how well-built it is. Previous-generation Mad Catz products could be a bit squeaky around the edges, but this is an entirely different beast. Even through it’s pitched as an entry-level keyboard, there’s pleasing degree of quality on show. Two chunky pieces of injection-moulded plastic form the frame of the unit, but they’re capped with a toughened aluminium faceplate and a frameless spill-resistant keyset. The on-key lighting is superbly even throughout, and the keys themselves feel solid and durable. There’s some cost-saving on show in the USB cabling, which is PVC rather than braided, but that’s my only quibble. Overall, the visual impact of the STRIKE 2 is far greater than the budget price they’re charging for it.


The STRIKE 2 is based around rubber-membrane technology, so it’s no surprise that the key action is softer than you’d find on pricier mechanical models. We reviewed the Roccat Suora FX a few months ago and, although that unit looks superficially similar to the STRIKE 2, the keyset feels entirely different. On the STRIKE 2, the keys have a duller action with a far less perky response, making typing documents and emails something of a chore. However, I found that gaming on the STRIKE 2 was a breeze. The more deliberate action caused me to make fewer mistakes when playing fast-paced games like Rainbow Six Siege, and the moderate level of resistance makes it easy to hold keys down for long periods. The STRIKE 2 also features anti-ghosting on the main gaming keys, so you should be able to press a whole bunch at the same time and they’ll all register. Although this functionality is more limited than you’ll find on higher-end keyboards, it’s plenty for casual gamers.

Another of the STRIKE 2’s likeable features is its lighting. The frameless design means that each key is raised above the keyboard bed so that the illumination shines around each key as well as through it. Unfortunately, the lighting is restricted to nine pre-set patterns. Some of these are repeated and some, like the flashing effect, aren’t much use for gaming except to show off. Also, in contrast to most other dedicated gaming keyboards, you’re not able to program your own lighting effects. However, some of the preset patterns are impressive, and once you’ve found one you like you’ll benefit from an in-your-face lightshow that’s impossible to ignore.

Unusually, the STRIKE 2 is a pure plug-and-play device, so there’s no option to set up macros, hotkeys or specific game profiles. Again, this is something that’s standard on most gaming keyboards, but it’s worth noting that software is the Achilles’ heel of many a hardware manufacturer; for a device at this price point, it’s probably better to provide no software than to do a poor job of it. Instead, Mad Catz have built media, Internet, lighting and volume controls as secondary functions on the standard keys. It works well, and if you’ve never opened a peripheral’s driver software in your life you’ll probably appreciate the simplicity. However, if you’re a master tinkerer then you should look elsewhere.

Although I’ve spent much of this review pointing out areas where this keyboard isn’t as impressive as costlier counterparts, I can honestly say I’ve enjoyed my time with the STRIKE 2. Yes, it has limited lighting options, but the inbuilt lighting patterns look absolutely great. And yes, it’s based on a membrane rather than mechanical switches, but the key action still works very well in games. It may not have all the bells and whistles, but it’s cheap, it’s solidly built, and it does the basics very well indeed. For all its simplicity, this is one of my favourite keyboards of this year.