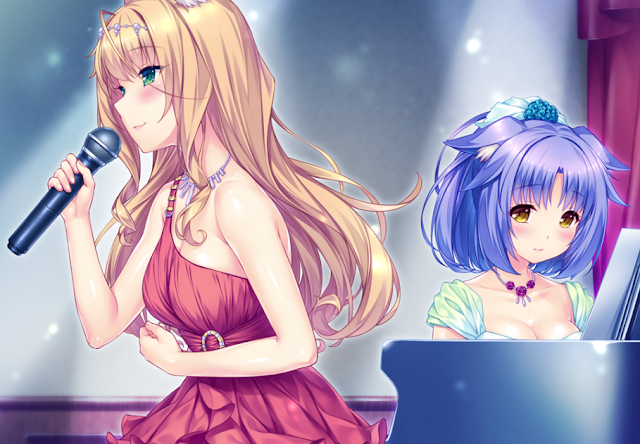 After thoroughly enjoying the first installment of Nekopara on Nintendo Switch, I unfortunately missed the second for whatever reason. I’m all caught up now though, as I’m in a good place and space to review the newly-released third edition. This is a review of Nekopara Vol 3, but you can take this as a review of the second as well, as one of the appealing things about this series is its consistency.

Nekopara is a series focused on a hapless (and rather dull) protagonist, and a harem of overly enthusiastic and doe-eyed cat girls that he ends up with. The protagonist is following his dream of setting up a patisserie, and the cat girls end up being his staff… and lovers. These girls might only have eyes for our hero, but they’re certainly happy to share him. It is, in other words, an extension of the kind of fantasy that Akihabara’s maid cafes promote, where pretty young ladies in maid costumes call you “master” and wait on you hand and foot in-store, and you’re lead to imagine what that would be like after hours too.

By the time the third game rolls around, our dude’s patisserie is now a raging success, and it’s all because of those girls. There’s a blog that attracts customers from across Japan, and the number of cat girls in the harem has grown, too. In fact, this is the main way that the third volume builds on what came before. It’s really just a case of more cure, adorable girls, in every shape and proportion to appeal to every taste. 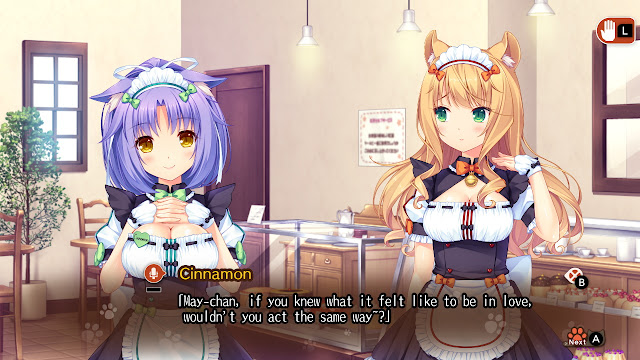 Thankfully the game’s a greater push for the comedic and light-hearted than it is anything necessarily pervy. This is particularly true of the Nintendo Switch version. On PC, the Nekopara series is a series of hentai titles, featuring full nudity and sex scenes. Nintendo, as open to fan service as it has been in recent years, stops short on allowing that kind of material on its console, and so Nekopara Vol. 3, as with its predecessors on the console, has had the more extreme elements removed. However, as I argued in my review of the original on Switch, I actually think that’s for the best. The light and silly tone of Nekopara goes odd places when the girls get their kits of for a bit of the old in-out, in-out.

With the sex scenes out, Nekopara has some cleverly risque dialogue and the odd bit of visual fan service, but it remains a rather sweet and charming little story throughout. It’s a little like the Fate series, or Utawarerumono – I enjoy fanservice and h-games plenty enough, but there are times where that stuff is detrimental to the strength of the rest of the material, and I do think this is true of Nekopara too.

It’s a gorgeous series, and Volume 3 benefits from having even more characters to follow along with. Each cat girl has a distinct and unique design, and though they generally fall into neat categories for “what anime fans like” – there’s the pretty and cute twintails girl, for example, and the perpetually lustful oppai girl – they’re all written and animated well enough to avoid being trite. The cat girl theme itself is there to enable the protagonist to treat the girls as pets rather than people, which isn’t exactly the most wholesome theme, though it is clearly performative and is anything draws a broad picture around how utterly ridiculous the Akihabara culture it’s drawn from is. 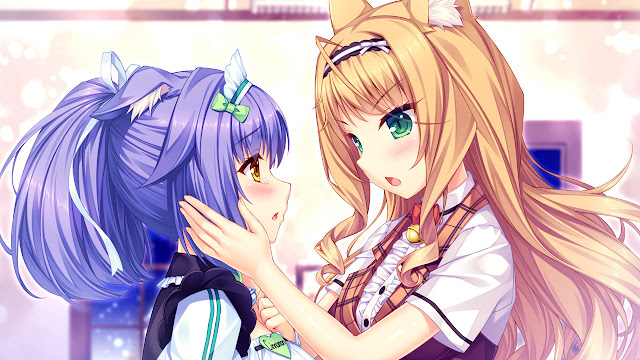 The one thing I’ve never really understood about Nekopara is the groping feature. While Nekopara is for the most part even less interactive than most visual novels, you do have the ability to, at any time, stop the progress of the story, to instead pull up a disembodied hand, which you an use to “touch” the girl, wherever you like. Her reactions to each touch are random, and the same regardless of where you touch her – touch her twice on the boob and she’ll be mad at you the first time, but then blush and swoon the next… and then she’ll do exactly the reverse if you touch the top of her head. This feature doesn’t achieve anything, doesn’t lead anywhere, and is entirely pointless. It doesn’t even work as fan service, since a properly fanservicey game with touch features, like Senran Kagura Reflections, would give you a very specific feedback when you touched her in sensitive areas, precisely to create the impression that you’re not just holding her hand.

Still, that feature is entirely optional, and easy to ignore. Playing through the rest of the story you’ll find there aren’t really any branches to go down, or anything to do other than to enjoy the gorgeous art and well-written, light hearted storytelling. There’s no grand message in Nekopara. There’s no insights into the human condition. There’s no drama or antagonist to overcome. It’s barely even a slice-of-life game, and the utter pointlessness of it all would almost make it an absurdist work in the vein of Waiting for Godot, if that was the point of the game. It’s not though. Nekopara’s just there to celebrate cute cat girls in a toothache-inducing patisserie setting, and as long as you go in with that specific expectation, it all just works.

You may as well play each of the Nekopara titles in order, now that they’re all readily available. Each is self-contained enough that it makes sense in isolation, but each also builds on what came before. None of them are particularly long (perhaps 10 hours from start to finish), so, yes, you may as well play Nekopara 3 third. 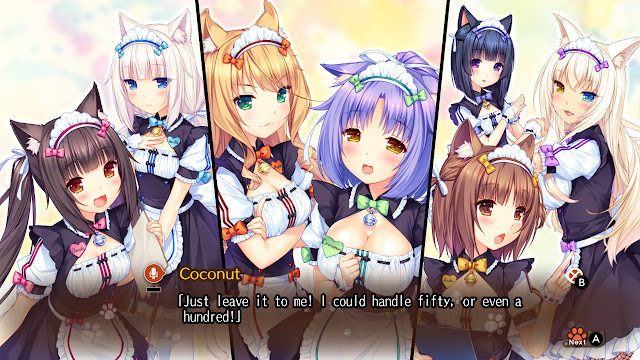 The world has seen better visual novels. We’ve experienced smarter and deeper narratives, and we’ve seen games that effectively meld visual novel convention with gameplay elements to push the boundaries of what this genre is capable of. But since it’s set in a patisserie, let’s use this analogy to explain why Nekopara Vol 3 is so worthwhile: a title like Steins;Gate, Death Mark or Utawarerumono is like having a Kobe wagyu beef steak. It’s the most succulent, delicious thing you’ve ever eaten. Nekopara is like having a crepe, filled with cream and sweet fruits; you’re going to be on your death bed saying “I’m so glad I didn’t miss out on that in my life,” but you’re going to enjoy the hell out of eating it anyway.

There’s a One Punch Man game on the way