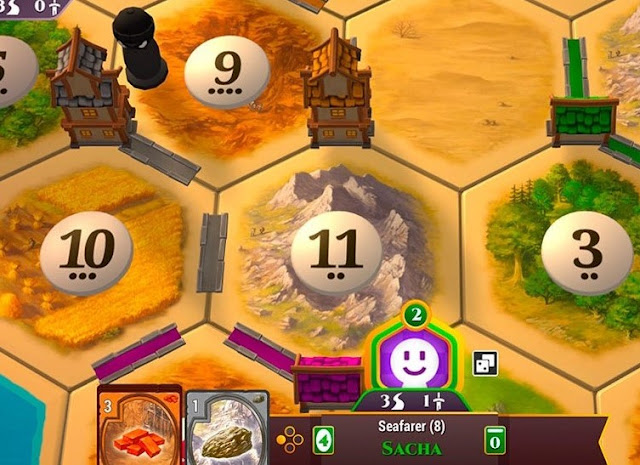 Once upon a time, Monopoly and Risk were giants of the board game world. Every family had copies, everyone played them, and it was considered a great family activity to break out either of the two on a Sunday afternoon. Fast forward to today and more people recognise that Monopoly and Risk are both pretty poorly-designed games. Both classics are overly reliant on luck via random dice rolls, limited in strategic scope, and generally unpleasant to play in the way they outright encourage bullying behaviour. There’s something of value in each, in looking at how they both mirror a whole load of real-world behaviours and attitudes, but I can’t think of a single person that, having a pile of board games to choose between, would choose either Monopoly or Risk for a games evening.

I use this as the lede to my review of Catan because I think that while it’s currently a darling enjoying mainstream success, and really responsible for driving the “Eurogame” renaissance in board games, I don’t think Catan will endure any better than Monopoly or Risk have. Fundamentally it’s a poorly designed game, and has all the same issues that the other two “classics” share.

If you’ve never played Catan before, it’s a simple enough game. The play field is broken down into hexagons, and each hex represents a resource of some kind (Wheat, Timber, Stone, Pastures, Clay). Each hexagon also has a number, between 2 and 12. Your goal is to place towns and cities on the edge of these hexes, and then take turns rolling two six sided dice. Every time the number shows up that matches a hex that your settlement is touching, you gain the resources printed on it. You can trade those resources with other players by doing deals with them, and then use the resources to build roads, additional towns, and therefore additional resource opportunities. 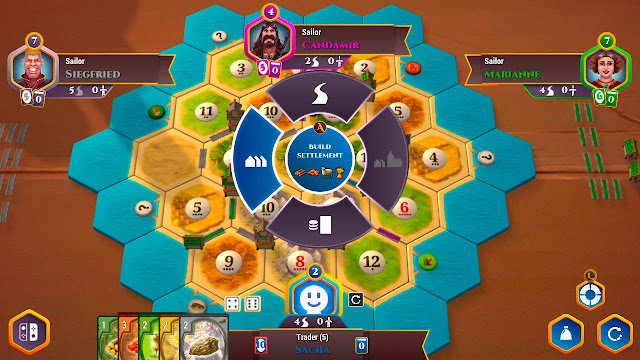 There’s catches, of course. You can’t share spaces with other players, so the game’s a great race to access the best locations and resources as quickly as possible. And, every time a “7” is rolled, the robber comes into play. This fellow can be placed on any tile, and he immediately steals a resource from one of the people that occupy that hex, giving it to the person that rolled the dice. Following that, the robber “blocks” that tile from generating any further resources, until another “7” is rolled, and he’s moved on.

There are several huge issues with Catan. Firstly, just like Monopoly and Risk, it’s far too reliant on the random dice roll. You can do everything right, by setting up your buildings on the hexes most likely to be rolled up (“6” or “8”, for example), only to have a series of “bad” dice rolls absolutely ruin you. It’s also a game that’s incredibly difficult to come back from behind – the first player to build an extra couple of towns is going to have a much better flow of resources coming in, which means they can build more and more quickly, and so on and so forth. The only way for the other players to catch up is if – you guessed it – the dice rolls are favourable. The winner of the typical Catan game is obvious at about the halfway point, making the second half of the action feel like an arbitrary journey to the inevitable.

Finally, that robber encourages people to be utter bleeps 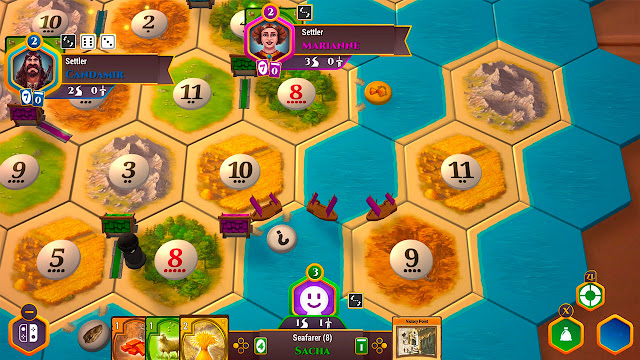 What is nice is that there’s both a standard play option, and a campaign of linked together scenarios. There’s a wide range of different ways to play Catan and alternative rules, so the faithful are well catered for with this game (though be aware that DLC is involved in getting the complete experience). Online multiplayer is also available, of course, and there’s plenty to unlock while playing thanks to the points earned after each game giving you a “level up” every couple of games.

The online is the best version of this experience because when it comes to single player, Catan’s single player AI is terrible. There’s three AI settings, but rather than design the game so that the AI plays better, the higher level AI opponents will mindlessly pick on you with the robber while ignoring the others AI players, and magically get the perfect rolls that they need. Perhaps I just got unlucky when I dialed the AI up, but it goes to show the weakness of the base game that the most effective way to adjust the difficulty of Catan is to manipulate the dice.

Just as I can boot up Monopoly or Risk and have a bit of fun with it, I can play a couple of games of Catan and enjoy my time. I love board games, and Catan is a board game. It’s as simple as that. I know Catan sells well and that makes it the ideal choice for a port, and in fairness, Catan on the Switch is a serviceable effort. But when I look at my board game shelf and see stuff like Twilight Struggle, Heroes of Waterdeep, Arabian Nights, Puerto Rico, Arkham Horror, Rising Sun, Tokaido and Puerto Rico, I can’t help but think to myself that there are so many more interesting board games that I’d much rather have on my Switch than a serviceable version of Catan.