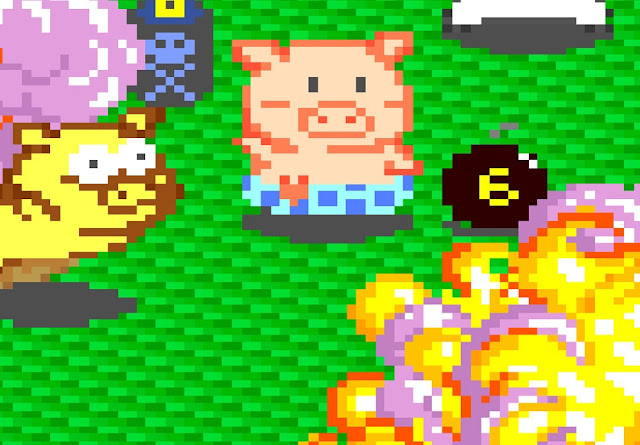 A couple of weeks ago one of the ongoing series of Arcade Archives titles landed on Nintendo Switch. There’s so many of these that land these days that it’s hardly worth writing about, especially when we also get so many compilations of classic games now. Releasing an individual retro title these days seems… quaint, to say the least.

But the one I’m talking about here is Butasan, and Butasan is a masterpiece that few other games can even aspire to be. In an aggressively negative world where everyone seems to be in a race for who can pull humanity into a new Dark Ages first, the renewed existence of Butasan might just be the spark that we need to keep struggling on. The proof that there’s something good left in the world.

Okay, I do exaggerate there a little… but only a little. Butasan really is brilliant good fun, and it makes me sad that Bomberman has spun on into an unending franchise while Butasan has not.*

In Butasan you play as a pig (“buta” in Japanese), and need to run around a level throwing bombs around to blow the other pigs up. Some of those pigs are fashionably dressed indeed. Others are not. But you’re all united in your desire to turn your rivals into roasted bacon bits, to go with the smashed avocado toast breakfasts that hipsters have in hipster cafes the world over.

Mechanically the game is ridiculously simple. Bombs lie around the level, your pig picks them up by running over them, and then you lob them with a simple press-and-hold of the action button. A bomb explodes if it hits an enemy. There’s also a duck button that you can use to get out of the way if there’s a hurled bomb incoming, but it’s more notable for being so cute than actually helping avoid death. Butasan gets pretty manic, pretty quickly, and the “duck” button won’t help you if a bomb lands next to you and then explodes because the countdown has hit zero.

The only other gameplay quirk is that each bomb has a different countdown timer. Some start the level with only a couple of seconds on them, while others need to countdown from 30 or thereabouts. This actually makes things even more manic, as keeping track of a dozen or so different countdowns is a spectacular recipe for a headache. 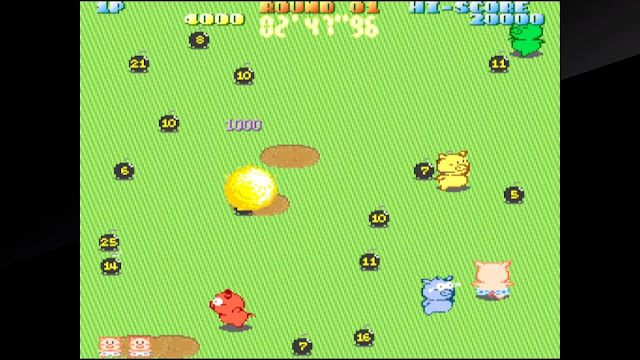 There’s one minigame after every couple of levels, which plays out like a bad whack-a-mole game. It’s really not that interesting, and compared with some of the little minigames of other classic arcade titles (Mario Bros. and Penguin-kun Wars spring to mind), this is an oddly disappointing way for Butasan to drop the ball. Or bomb, as it were.

That’s really all there is to the game. It’s quite beautiful in its simplicity, but it’s colourful and charming enough, with cute pig characters, and the absurdity of the action never manages to become tiring. As a classic arcade game from back in 1987, there’s no narrative or context to the action. It’s all about the high scores… but you know what? That’s all you actually need sometimes. The mesmerising speed of the action, and the pyrotechnics as the screen fills with bombs, makes Butasan a weirdly meditative game to play.

Also, on a side note, Butasan was originally released in English as Psycho Pigs U.X.B. Thankfully, this Arcade Classics re-release has kept the good name, but that Psycho Pigs release was notable for something else; one of the most truly embarrassingly uses of sexual objectification in a game advertisement ever… which is a truly impressive effort for an industry that is so well known for pulling stunts like this: 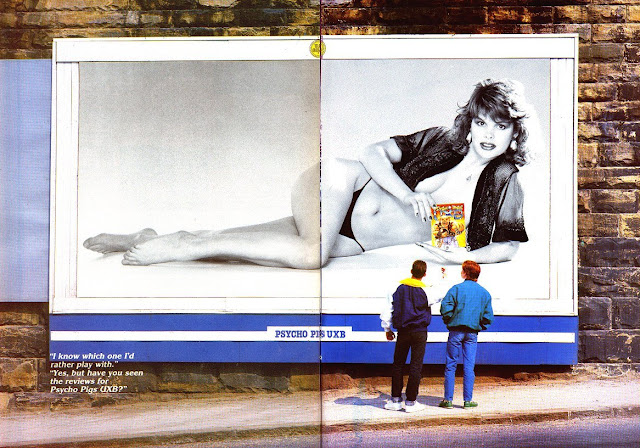 Anyhow, please don’t hold that terrible English name and even worse advert against Butasan. Butasan is masterful. Buy it, play it, love it. And you’ll quickly forget what a “Bomberman” was ever meant to be.

* Not that I dislike Bomberman. I love it, in fact. I just love Butasan more.