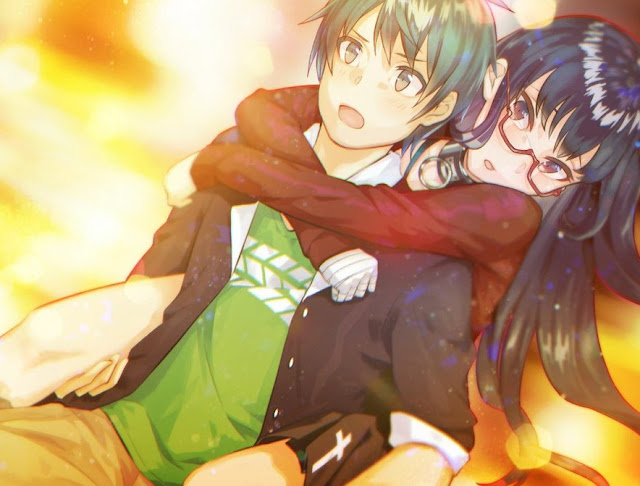 I like games with fan service and risque humour. I like my anime tropey games. Our World Is Ended contains copious amounts of both, and on a certain level I do derive some entertainment from that. The game is indeed often amusing. Unfortunately, a lot of the time Our World Is Ended also hurts itself, because underneath an aggressive obsession with boob sizes is a narrative core that deserves to be taken seriously and is relevant to the evolving role of technology in our society. Put together, the two competing thematic cores clash in a very ugly manner.

One of the great debates that is swirling around the digital world at the moment is the increasing encroachment of the digital into our real world. Whether it’s VR, AR, or things like the “holographic” technology that allows Hatsune Miku to perform “live” for us, it’s increasingly possible to use digital technology to enhance or supersede our experience of the “real world”, and craft something of our own design. It’s a subject that I, personally, find fascinating, and have studied a lot. I’ve written articles about the potential impact of supernormal stimulants on societies, as people “replace” the world with a digital space of their own choosing. It’s not just me looking at this stuff, either. I’ve spoken to academics about it. The reason I love The Caligula Effect so much is that it’s one of the core themes to that game. I even went to an art exhibition a couple of years ago in Tokyo in which the artist outlined a couple dozen potential apocalypses, and this subject – the supernormal stimulant – was indeed responsible for one of the theoretical apocalypses.

So you can imagine my interest in Our World Is Ended when the very first scene has our protagonist, the hapless Reiji Misaki, testing out a special AR headset in the real world, on behalf of a small game development studio. The head of the project, being an utter pervert, decides to replace all the billboards that Misaki can see with swimwear and lingerie photos, and then replace the clothes on the co-worker that Misaki is out with with a sukumizu swimsuit. 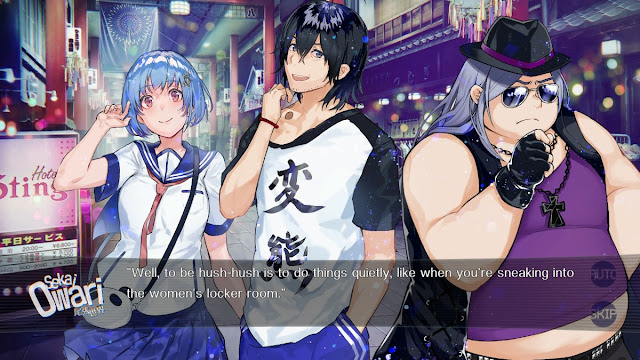 But then things go very wrong. Misaki blanks out briefly, and when he comes to, he sees a horrific vision of all of his friends being strung up in a crucifixion pose across the blasted landscape of a ruined world. A women in a kind of angelic wear warns him “the world is about to start…”, and on that cryptic note, Misaki has the AR headset removed and he’s back in the real world. But then things start getting really weird, and Misaki, along with the rest of the development team, start to find the lines between reality and fiction blurred to the point that it becomes hard to tell where one starts and finishes.

This of course speaks to the ongoing debate about the nature of reality – whether reality is subjective, and if so, what the implications are in altering a personal reality. I certainly don’t begrudge the idea of replacing the inundation of marketing content that assails our eyes every day with something more visually pleasing. I’d be the first to sign on to tech if it meant I could replace all that stuff with sexy images of Hatsune Miku in her underwear. What frustrates me is that the writers of Our World Is Ended is that after that intriguing, clever, and entirely reasonable set-up, the narrative settles into a rhythm where is spends far, far too long on long digressions about the relative bust sizes of each of its female characters. It goes so far that there are periods within the game that I genuinely think the writers forgot that they’re actually meant to be making a game about fluid reality.

It doesn’t help that the game has a truly juvenile understanding of “sexiness”, too. Ridiculously big boobs are the only thing the narrative really celebrates. Any woman with a normal sized chest is “saddening” and that means they must live a “saddening” life (the script continues to use this word, which is either a poor translation, or an odd script tone, for the context that it keeps popping up in the narrative). A tentacle monster (with special acid that only dissolves girl’s clothes), only goes for B-cups and bigger. Over and over again the cast make fun of the one woman with a smaller chest, who takes it all very personally (and yet they don’t stop teasing her, because sexual harassment is hilarious). Thankfully they do largely leave the token 13 year old loli character alone… though they do sometimes “joke” about sexually harassing her in her presence (and her father’s), which is the final nail in the coffin at establishing that this bunch of characters as a deeply unlikable lot, really. 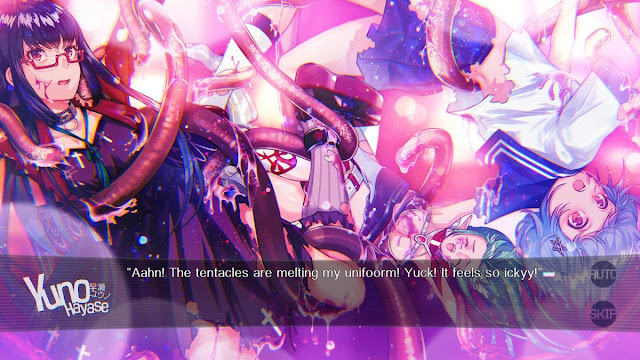 I’m fine with a boob humour, but with Our World Is Ended, the humour is a bad misfire for three reasons: 1) it really does sink into body shaming, which isn’t funny at all, 2) it’s so discordant with the relatively serious tone of the game’s main theme, which brings me to 3) it’s also completely unrelated related to that theme. Every boob (or flat chest) joke is a random digression which one assumes is there purely because the writers just like breasts that much.

All of this would be almost forgivable if the narrative was in some way subversive or satirical, but that’s not really the case. The humour is flat – played for the laughs as part of a trope rather than to deconstruct it, and in-between the boob humour the characters also share interactions that are genuine and sentimental in tone. In fact, Our World Is Ended would have been so much easier to defend if it just stuck to making the characters unlikable, because then the sexual harassment would just be another facet of their unpleasantness, but no, there’s also a discordant sentimentality built into the narrative in which characters sometimes have deep-and-meaningfuls that are designed to make you like and sympathise with them instead. In the end, the tone of writing and characterisation is so inconsistent and inelegant that it’s difficult to really connect to any of them on any level… so at some point you just give up caring about any of them at all.

When you look at the best examples of the visual novel genre, they do generally meld humour and/or fan service in with some pretty serious philosophical thinking. Steins;Gate lacks the fan service, but certainly has its moments of all-out otaku-orienated humour, in and among its deeper themes. Death Mark melded genuine horror with rose thorn bondage. Danganronpa was a mesh of one of the better dissertations on game theory, along with a ridiculous psychopathic bear and sexy anime girls and (in the third, with one particular character) some spectacularly crass dialogue. In all of those examples, the weaving of the humour and the sexy to bind it all together into something cohesive was exceptional. Our World Is Ended feels more like it had multiple writers on the project, and they never actually got together to talk about what they were doing. 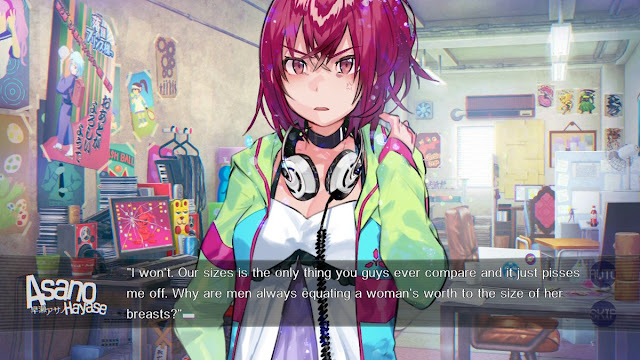 It’s more the pity because the game has a stunning aesthetic and presentation. Character models are all gorgeously drawn (even if some of the women are, of course, over-stacked to the point that you just know they’re in for back problems before they hit 30) and while this is a visual novel with limited animation, the personalities shine through with each pose and movement that they do make. Environments shine, too – Our World Is Ended is set in and around Asakusa, and of course that means the iconic temple. From it, to the surrounding streets, through to the development studio the crew base themselves in, the game’s environments are gorgeous. Finally, the key art is sublime. For all my comments on the oddly-placed and tonally discordant fan service, the game has some meticulously sexy key scenes. The tentacle monster, in particular, is pure fan service gold.

As a pure-play visual novel, Our World Is Ended isn’t too “gamey,” though there are a couple of decisions that you can make along the way, which naturally affect the way the story branches out by the end. Irritatingly, one minigame that does creep in is the times you need to make a rapid response to something. Sentences fly across the screen, with each representing a different potential response, but if you let it disappear off the screen that response is lost to you. More than a few times, by the time I’d finished reading each sentence that was scrolling across the screen, I’d lost the chance to make a couple of decisions, and was left with the (universally poor) remainders. It’s a poorly designed effort at interactivity.

That minigame – and the occasionally quirky localisation – are both forgivable. What really lets Our World Is Ended down is its lack of narrative focus. On the one hand you’d got a compelling discussion about fluid reality – something that, much like AI and robotics, is quickly falling out of the area of “science fiction” and into “we actually need to talk about this, because it’s happening” territory. On the other hand, you’ve got a lot of stories about a bunch of generally unlikable characters and their obsession with breasts. With the way Our World Is Ended is designed, these don’t mix anywhere near as well as they needed to to take this to the upper echelons of the genre.

Idea Factory to localise Azur Lane: Crosswave to the west