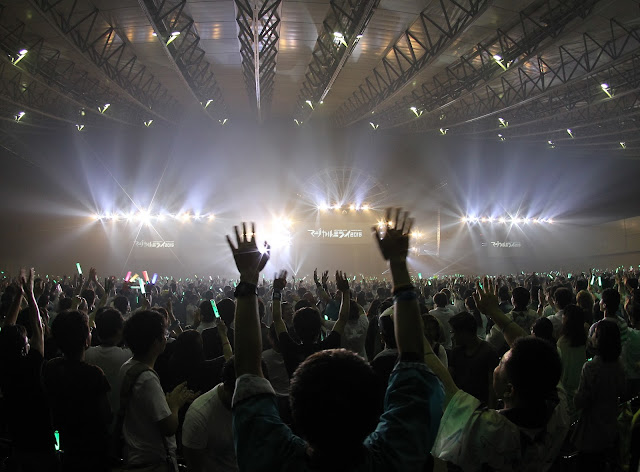 Over the weekend I went along to the Hatsune Miku Magical Mirai 2016 concert and exhibition and OH MY GOD I FELL IN LOVE WITH HER ALL OVER AGAIN.

I won’t retread what I wrote in my piece on the concert last year. Please do read that one for my general thoughts on these concerts and how utterly mind-blowing they are. This time around, though, rather than purchasing tickets that stuck me way back in the doldrums, I made sure I was right at the front. The second row, in fact. These tickets were just $10 more expensive than general admission, and boy was that money was well worth it, because the closer you get to Miku on the stage the more utterly incredible the show is.

In addition to being able to feel the live music (Miku’s backing band are really real people playing the songs for real), there’s just something incredible about watching a fully 3D, life size character moving around the stage in a completely lifelike fashion, with no indication that she’s even a projection, other than for the fact she is so brightly lit (though even that looks less artificial live than you might have seen on TV or YouTube, and in music concerts performers do tend to be well-lit). The track list this time around was incredible too, with the principle theme song for the event, 39 (Thankyou) Music, becoming an instant new favourite of mine. Seriously, it’s been stuck in my head ever since. That track needs to be DLCed into Future Tone or Miku X, stat.

Similarly, the expo that is attached to the concert has steadily grown to become something substantial, beyond what the opportunity to buy goods from the vendors. There was a comprehensive history of Miku in one section, and a big outdoor area encouraged people to park their itasha Miku painted cars and motorbikes for others to look at and enjoy. Even charities were getting in on the action – donate blood to the Red Cross and get exclusive Miku goods, for example. I suspect the Red Cross just tripled its stock of blood from being there that weekend. 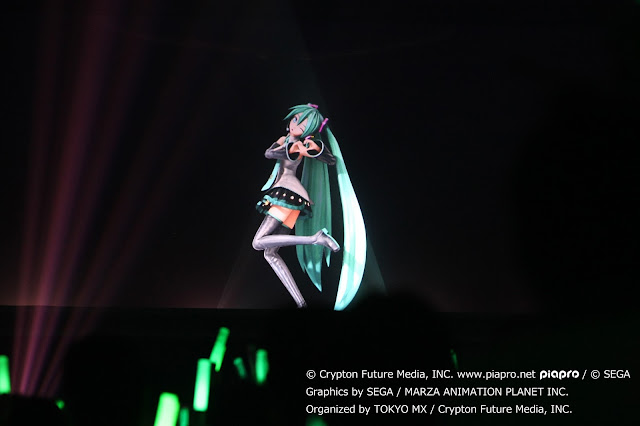 As with last year I found that the thing I love most about this concert and expo is how overwhelmingly positive the whole environment is. Miku’s success has grown on the top of people working together to create her music and costumes, fan art and culture, and the spirit of collaboration within this community gives it a vibe of true positivity, rather than the kind of competition or elitism that is so common in other hobbies.

Miku is rapidly growing into a bona fide national treasure in Japan, too; she’s now legitimately mainstream. It’s not just that she’s appearing in ads for top brand cosmetics products here. Miku’s concert was broadcast over TV this year, with a full live show built around the expo to boot. This year the live concerts were also in a far bigger venue than last year; one of the very largest concert venues in Tokyo, in fact. I have a very earnest bet with myself that Miku will be a substantial part of the 2020 Tokyo Olympics, because her global growth trajectory is such that I just can’t see her becoming anything but one of Japan’s most lucrative entertainment products over the next four years.

So how is she going to destroy us all?

The timing was completely coincidental and quite amusing, but a day before the Miku concert I found myself at a very sobering art exhibition that featured a very different look at the character, and in a very different context. I swear I had no idea that she would show up at this exhibition. In fact, I very nearly didn’t go to the exhibition at all. I was at the Tokyo Photographic Art Museum for the World Press Photo 16 exhibition – a major award for photojournalism that, as a photographer myself, inspires me deeply. The admission to that included a ticket to attend an exhibition by an artist I hadn’t experienced before – The Lost Human Genetic Archive by Hiroshi Sugimoto.

So I went along to this exhibition, with no idea what to expect, and as I said, it was a sobering experience. In a large exhibition space designed to look like a decaying apocalyptic world (yeah, think Fallout – that’s close enough), there was a series of dioramas, models, paintings and photographs that represented a couple dozen possible causes of the extinction of humanity. Some were of natural causes (meteor, volcano), and others were man-made (climate change, political upheaval). For each exhibit, there was a corresponding short story that described the scenario and conditions that led to the destruction of humanity. 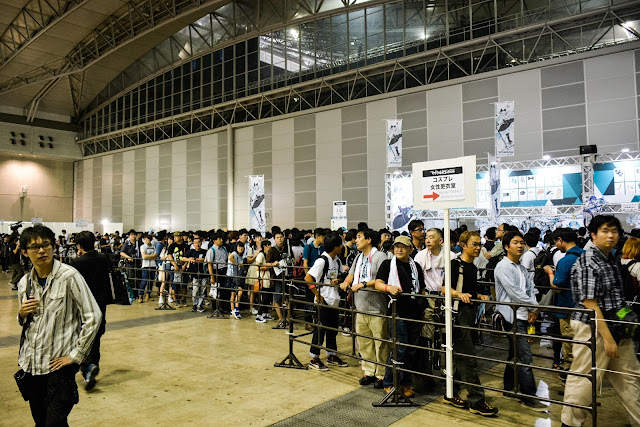 What does all this have to do with Miku? Well, in the exhibition there was indeed a section that had a model of Miku on display, as well as the following accompanying text:

Today the world died. Or maybe yesterday. It all began when I went to a Hatsune Miku 3-D (sic) concert as a kid. I couldn’t tell virtual from real. After a childhood immersed in gaming and anime videos, imaginary stuff is more real to me than actual things. To most young kids, reality’s the fantasy. It’s like home grown Zen and everybody’s already reached satori. But enlightenment was a dead end. Folks who spend their whole life dreaming couldn’t be bothered to make babies, so the human race just petered our. Game over.”

This is, of course, an unlikely hypothetical, as are all the other apocalyptic events that Sugimoto outlined in his exhibition. And yet that was also the point; these are unlikely events, as was the meteor that destroyed the dinosaurs. We need to be very aware of the social, political, and environmental factors that might threaten the future of humanity, and the advent of supernormal stimulants like Hatsune Miku and other digital people is one such example of a cultural influence that is potentially going to have major implications over the longer term.

Why do I say “supernormal stimulants”? Well, here’s the real crux of the matter. Well before I even saw this art exhibition, I was already aware of the potential sociological impact that Hatsune Miku might have on us. I had, in fact, already written about it, and been published in Australia’s largest newspaper on the topic. The term “supernormal stimulant” comes from a conversation I had with an academic that specialises in evolutionary psychology on Hatsune Miku, and without getting into the science of it, Sugimoto’s interpretation of the impact that Hatsune Miku and other digital celebrities might have has scientific validity. 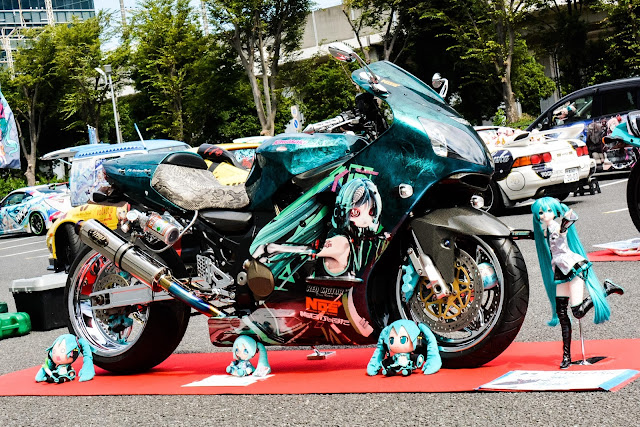 This point was emphasised still further when I was at the Miku expo and came across the Gatebox booth. Though this technology is still in the early stages of development (the company representative suggested that they might start taking pre-orders in 2017), what it will do is create a virtual Hatsune Miku in your living room that you can interact with as you might if she were real. You’ll be able to have complete conversations with her, in other words. My wife joked with me that men would “no longer need wives” once that product hit the market. Jokes aside, there’s an argument in psychology to suggest that people would start replacing human interactions with these “perfect” alternatives, and as more and more of these products come onto the market, and are localised to a greater range of audiences, there will be substantial implications for the traditional social interactions that lead to reproduction.

So, either Sugimoto read my work and was so inspired by it that he felt the need to include it in his expedition (unlikely, of course), or he’s arrived at similar conclusions through his own research to what I have discovered. When both science and artistic thinking agree on a topic, there’s usually something to it.

Hatsune Miku isn’t likely to actually be the cause of humanity’s destruction, of course, and I’m not suggesting that any of this is a “problem” that needs addressing – I adore everything about Miku without reservation and I’ll be the first to get my name down for one of those Gateboxes (thank God my wife is an understanding soul).

It is, however, interesting to consider the deeper social movements and behaviours that Miku might represent, and now would be a good time for people to recognise that even if they’re not personally interested in Miku, she (and other digital celebrities) are starting to leave a very real mark on the physical world that we now share with them.

And hey, if Miku really is the harbinger to the apocalypse, I can think of worse ways to go out. The world can be such a decrepit place that escapism into oblivion seems a positively wonderful alternative.