Be careful what you wish for. The SteamWorld series, by developer Image & Form, has always offered stellar production values and tight, engaging gameplay, across the many genres that it has crossed over the years. There’s been a tower defence, two platformers, and a 2D XCom clone. The consistency across the titles, despite their wildly divergent gameplay, has been impressive, and yet each time I’ve also always wished for the developers to do something meaningful with the steampunk aesthetic to also push deeper narrative, lore, and to better contextualise the action. SteamWorld Quest is an RPG and tries to do the narrative thing and… yes, be careful what you wish for.

Sadly, Image & Form has brilliant artists and gameplay designers, but for whatever reason have never seen the need to find an equivalent-quality writer. The SteamWorld games amble along with a light sense of humour through their jokey plots, but there’s nothing particularly memorable about them. You’re not going to come away from a SteamWorld game comparing it to the work of Bioshock, let alone literary greats of the genre such as China Miéville. Now, for strategy and platformer titles Image & Form can get away with that. The expectation of narrative isn’t there. But to approach an RPG in the same way leaves a very hollow feeling, and so I’ve got to say that for the first time SteamWorld has failed – badly – to meet my expectations. I chuckled a few times while playing SteamWorld Quest, but I can’t even remember the names of any of the characters involved as I sit here to write this review. That’s always a red flag where RPGs are concerned.

There’s a good concept in there too, which makes the laboured writing all the more disappointing. SteamWorld Quest tells the story of world that has, for so long, been free of serious conflict that the heroes of the last major war have largely faded from memory. It’s the Lord of the Rings “things that should not have been forgotten, have been lost,” deal, which is a very worthwhile theme to explore, as the real world seems so hell-bent on forgetting the lessons learned from World War 2 in driving us all towards another one. Unfortunately this theme isn’t developed with any particular complexity, and seems to exist within the game more as an excuse to poke fun of the one character that does have reverence for said era and heroes… because that’s exactly what we need. People making fun of the historians. 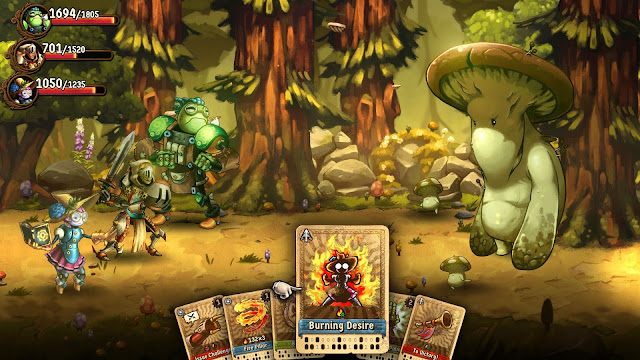 Once again, however, Image & Form’s team has done a good job with the mechanical and presentation elements of SteamWorld Quest. It’s a truly gorgeous game, with lush 2D environments to explore, and some neat level design to help keep things fresh. Levels are broken up into a series of small, interconnected “rooms”, often with a couple of different exits to choose between. There’s only one path through to follow the narrative, of course, but these little side rooms often hold challenging enemy encounters (for experience), and treasure chests (for loot), and because they’re rarely substantial digressions, they’re fun – rather than tiring – to explore.

Each new chapter in the game gives you a new environment to explore, and while SteamWorld Quest doesn’t deviate too far from the genre tropes in this regard, the level of detail and subtle sense of humour with many of those environments is the real reward for pushing through the game. Backgrounds have amusing little Easter eggs for people paying attention, while also being just exotic enough that I was, once again, left hanging for more lore and narrative building through the story. Truly I’ve never seen a developer/publisher have a setting and franchise that manages to be an unfulfilled in potential as the SteamWorld property is.

Combat plays out through cards, and it’s a great system. Each character in the party can bring a small number of cards into battle, which are shuffled up, and each turn you’re dealt out a couple of cards so that you hold six in your hand. You can play up to three in a turn. Some cards are “free” actions. They’re weaker in effect, but in addition to doing a small amount of damage to an enemy or giving your party a minor buff, they also give you action points. More powerful cards use these action points, so combat quickly settles into a rhythm whereby you mix the use of weaker and more powerful cards together. 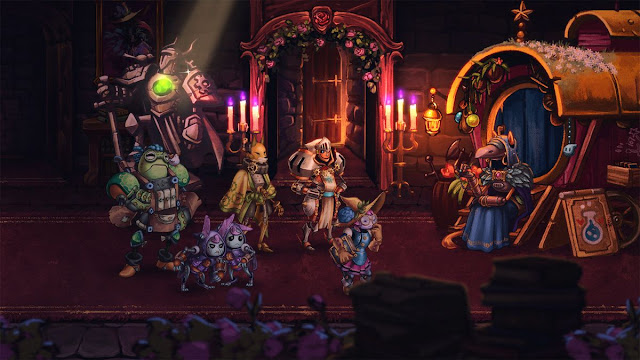 Battles do have a habit of dragging on – even common enemies can take a while to whittle down, and boss battles are truly protracted affairs. Your own party members are something of glass cannons, and you’ll need to split your time between protecting and healing allies with doing damage to opponents. This further lengthens even the most mundane battles, but because of the random nature of the cards these battles never become tiring.

There’s an efficiency to SteamWorld Quest outside of battle that’s appealing. At the start of each chapter there’s a wagon that you can pop into which behaves like both a shop and the crafting table; allowing you to spin the materials you earn through battle into new cards for your deck. Equipment slots are limited, but the impact of equipment that you can pick up along the way can be significant enough to make you care. There’s not much by way of side quests and additional stories, but that’s to the game’s benefit in terms of keeping the flow from level to level. Completionists will enjoy going back through earlier chapters to scour them for the (well) hidden treasure chests as an additional challenge.

On the one hand SteamWorld Quest is a frustrating experience. Image & Form really needs to track down some writers that can weave tales into its intriguing and impeccably-designed SteamWorld universe. There’s so much potential there that it’s becoming tiring waiting for the team to tap into it. At the same time, SteamWorld Quest is also a delight to play, with a well-developed card-based combat system, gorgeous art and production values, and elegant gameplay structures. It’s a game (and franchise) that wears its indie credentials on its sleeve, and it’s hard to be too disappointed by its flaws for that reason.