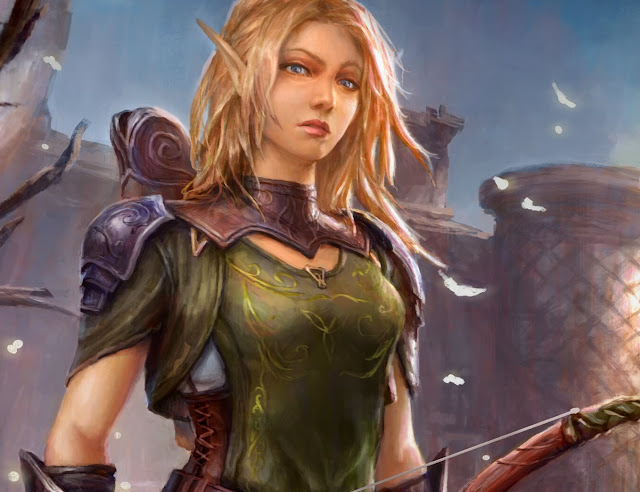 Brazil is a future star of game development, of that I am absolutely certain. With games like Toren, Chroma Squad and Knights of Pen & Paper, the fledgling games industry there is demonstrating that its talent is both highly creative, and makes games that have a global appeal. I’ve certainly got my eye on anything that comes out of Latin America and Brazil, which is why I jumped at the chance to play Eternity: The Last Unicorn. Sadly, this one let me down, and badly.

The first problem that Eternity throws up is that it’s based in Norse mythology. I’m sure the development team has a passion for the Norse gods and that particular setting, but that setting has also caught the eye of so many western developers (remember God of War?), and while there’s a lot of writing and lore to wade through in Eternity, it doesn’t spin a particularly nuanced take on Norse myths by comparison to some of those others. That’s to be expected; it actually takes a lot of research and expertise to tell a story that’s not of your own culture, and while a company like Sony can front up the cash to drive something through, a much smaller development team from Brazil, making their first game, was always going to be up against that particular hurdle.

Something that I would recommend to development teams from emerging game development hubs; tell us stories about your country and culture. There were all kinds of issues with Toren that I was happy to forgive because I was learning something about Brazilian culture and storytelling in playing it, and short of making some lousy game about drug cartels, no western studio is going to look at South America and decide to put a similar effort into it as it does with European stories. Japan and Brazil share a close bond, but Japanese studios simply aren’t going to send people to learn Brazilian stories. It’s up to the Brazilians to tell us about their culture, and I would have been far more partial to Eternity from the outset if it was a game about a mythology I’m not already tired of seeing in video games. 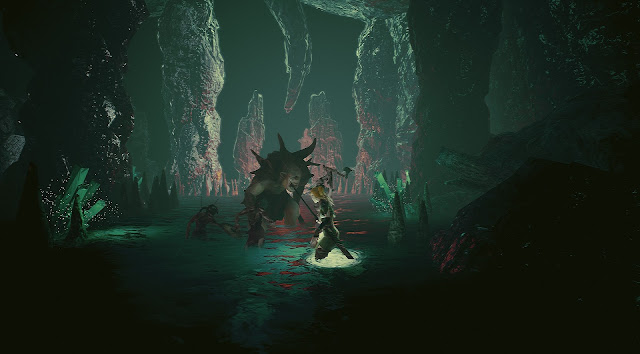 Sadly, even if Eternity did tell a local story I’m not sure I would be able to come away from it and recommend it, even for its cultural value. The issues with the game pile up beyond my tolerance threshold far too quickly. In theory this is meant to be something nostalgic and a retro throwback to the kind of things that we played on the first proper generation of 3D consoles. On first impressions, the static camera angles, jarring way in which musical tracks will transition just by taking a single step too far in a direction, and tight, linear pathways are all highly reminiscent of those heady early days of 3D action… the problem is that 3D action back then was never that good.

Being unable to manipulate the camera works to an extent in a horror game like Resident Evil, where your weaponry is, generally, one gun after another, and therefore judging distance to an enemy isn’t such an issue. Additionally, not being able to see what’s right behind you without shifting the camera completely is a great way to raise tension when you just know that enemies are surrounding you, but you can never get the camera in just the right position to see all of them. But even then, the developers used those camera angles to resolve development challenges inherent with early-era 3D games, and there’s a reason the static cameras were dropped for the remake of Resident Evil 2.

Eternity seems to be blissfully aware that no one really liked that approach to in-game cameras. What’s worse is the amount of melee combat involved. With melee combat, you absolutely do have to judge distances to opponents, and with Eternity that’s often difficult. Throw in a clumsy dodge button that never quite performs as planned, and it’s arbitrarily difficult to survive encounters with groups of enemies. 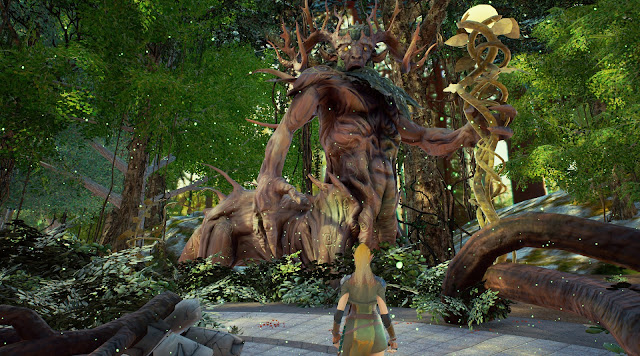 The game’s best moments are the boss battles, and when you come across some of the giant creatures of lore. Sadly, through much of the rest of it, it’s hard to tell where the generic fantasy ends and the Norse mythology begins. That lack of an identifying quality hurts some otherwise technically proficient art design, giving Eternity a blandness that is less interesting than the talent of the art designers deserve. What’s less enjoyable on a technical level is how mundane combat itself is. It’s perhaps unfair to compare to something like Devil May Cry V, but even within the indie space, titles such as Hand of Fate 2 show that developers can create dynamic and exciting combat systems, but Eternity is very much stuck in the past there.

Level design also comes from a bygone era. There are some attempts to encourage backtracking, thanks to treasures being placed just out of reach in areas, but the actual navigation through the levels is very linear, and there’s no sense of exploration. It’s such a pity that the environmental design sticks so closely to the bygone eras, where environments were so purely functional, because as we’ve all seen with the likes of Nioh and Dark Souls, properly designed levels enhance the storytelling, and share a few fables of their own.

Eternity is a misfire. It’s such a pity to see a project that had such good intentions fall to the wayside, but it’s hard to share the feeling that for a new developer, making its first game, Eternity is an overreach in just about every way. I’m sure we’ll see something much more refined and mature next time around.

A Japanese novel you should read: Grotesque