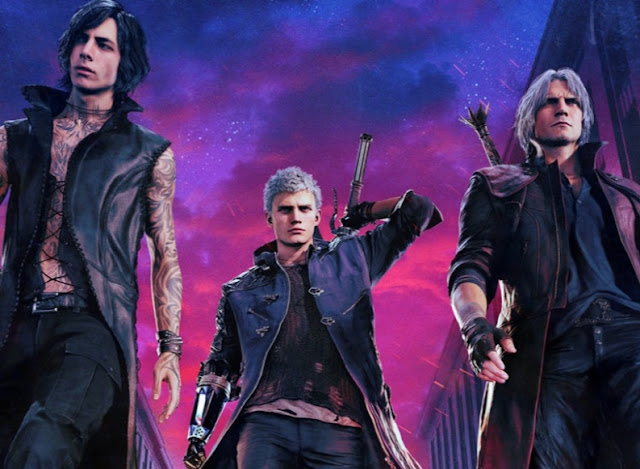 While it has “only” been six years since Ninja Theory’s DMC, it has been over a decade since Capcom’s last numerical release of the series, in Devil May Cry 4. Returning once again to fight the demonic forces of hell and those that control them, series mainstays Dante and Nero have an extra pair of hands in support this time, with the newcomer V, but even with that help, humanity’s latest threat may be just too much for them to handle.

While series fans never seem to agree on anything, the general consensus is that most that Devil May Cry 3 is the best in the series and Ninja Theory’s DMC is the weakest – if only because Ninja Theory had the audacity to have a different vision for Dante. I actually thought that one was well done, though I certainly appreciate that many wanted a continuation of the series, rather than an attempted reboot. The good news for those fans is that DMC 5 is the genuine sequel and continuation of what original fans wanted – and it absolutely nails both the series’ infamous sense of style, and its quality action mechanics underneath.

My biggest complaint with Devil May Cry 4 was that you spent more than half the game with Nero, a brand new protagonist, only to then have to take control of Dante midway through. You then had to re-tread too much ground, including re-fighting bosses. The narrative was built around it fine, but mechanically that particular trick felt like a cheap way of padding out the length of the game, even if it was enjoyable to play as two distinct protagonists. Devil May Cry 5 does a much better job with the way it treats its three separate playable characters; each either takes their turn in the limelight, and at times you can choose which one you want to take into particular parts of the adventure. 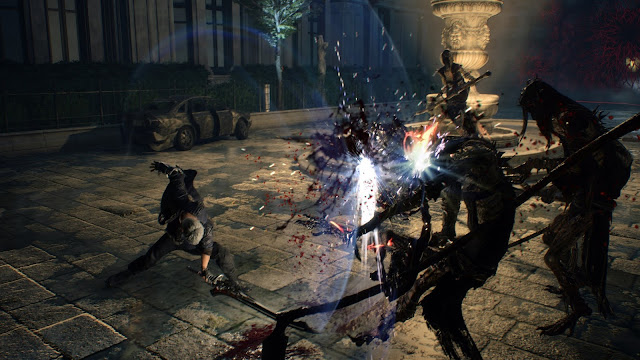 Following a standard demon invasion story (I told you DMC 5 sticks to tradition), a particularly nasty demon has set off an apocalypse and it’s up to our protagonists to hack them down, throwing witty banter and sharp one-liners in there just to make sure the demons know they weren’t just defeated, they were insulted on the way down. Devil May Cry has never been there to dig deep into the psyche or present a grand world-vision. It’s about the moment-to-moment, and allowing the humorous, charismatic characters to play, and DMC 5 gets this right from start to finish.

Each stage leading up to the eighteenth, (the last two stages are basically your final boss fights, and not really “stages” as such), are a mix of heavy combat with some light puzzle solving. Completing either of these kinds of activities will net you orbs, which act as a currency in order to buy items and upgrades to skills or equipment that you receive along the journey. Combat itself is fast paced, and in regards to the grading system that becomes the all-consuming goal, unforgiving. It’s all about the combo system. Putting combos together is more complicated than simply hacking at an enemy. Once you’ve got a combo going, you then need to also mix up the moves that you’re doing, else the score starts to drop. And, of course, getting hit drops the grade down substantially. Much of this will be familiar to action fans; DMC did kick so much of the genre off, but the rich combo system is really what sets this one apart. It’s hard – very hard – to master, but once you have, nothing feels quite as good as feeling like you can pull off an unlimited, flowing, varied combo.

Where DMC5 feels like it falls short is the quiet moments, when Dante, Nero or V are exploring their environments. As with its predecessors, DMC 5’s levels almost feel like they were an irritating imposition that the developers had to deal with, when all they wanted to do was throw another wave of enemies at you. There’s very little of interest outside of the enemies, and the puzzles are less puzzling than they are momentary roadblocks. I appreciate that DMC is all about the stylish, visceral combat, and its humour and irreverence, but at the same time, Capcom has got a fascinating bunch of characters, and the tantilising potential to build on its world. Perhaps Ninja Theory’s approach wasn’t right for the series, but more can be done – just look at how effective Bayonetta is at building its lore around a very similar sense of action. 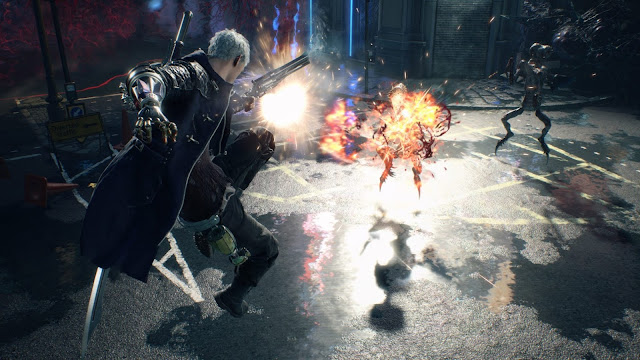 In regards to the stages themselves, like all Devil May Cry titles, there are a total of twenty stages. Capcom have played within this structure a little, with a non-linear sense of time, and cutting scenes (and stages) off at just the right point in time to keep you keen on seeing what happens to that character next. This doesn’t just keep things interesting, but seeing events from multiple perspectives has always been an enjoyable cinematic technique that helps crystalise the importance of key moments where it all comes to a head. Mechanically, it also makes sure that you never get the chance to become completely comfortable with any character as you know you’ll be switching shortly, which is far preferable to having to trudge through half the game before being forced to switch, a-la DMC 4

Also helping to ensure that you don’t feel cheated in swapping characters, there are a number of critical upgrades that, when bought, count for all three characters. Health upgrades, as well as orb balances are available at all times to all characters. Another nice touch is the weapon upgrades. Through story progression you will lose certain weapons. Rather than lose the upgrades you’ve applied to them, any abilities you’ve applied to them will be transferred to the next weapon.

Otherwise, Devil May Cry 5 is exactly what we’ve come to expect of the series. In fact, if anything it feels like the developers were that terrified of repeating the response to Ninja Theory’s DMC, that they’ve gone overboard on being traditional. But then, with such a slick, enjoyable combat system, and all the witty banter that you could ever want in a game, DMC 5 is a fine way to bring the series roaring back after a decade in limbo.

Finally! The best Mortal Kombat character has been announced for MK 11