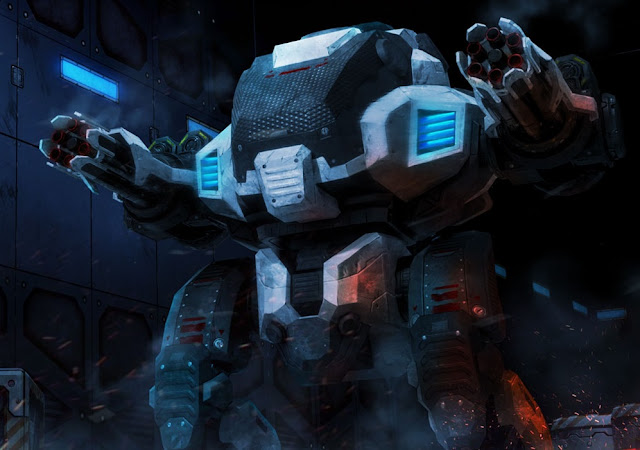 Mech Rage is a neat arcade title that seems at home on the Nintendo Switch. It’s a top-down shooter with responsive controls where you move from room to room clearing out baddies to progress to the next, collecting currency along the way to change and upgrade your weapons between missions. Your loadout consists of two weapons, primary and secondary, with your secondary being more powerful but limited by ammunition. You move with left stick, aim with right stick, shoot with the triggers, and dash with left bumper. It’s all very standard fare. But it’s a good formula to work with, and it at least feels nice to control.

The setting is likewise par for the course. There’s something about alien invasions and rescuing your crew, and to do so you need to go shooty kill the bad things. There’s no need for much exposition here, and that’s totally okay. That’s not to say the dialogue is at all bad, there’s a splash of character and bits of humour throughout, but native English speakers will notice the grammar is a little off. Indeed, Drageus Games is a Polish company. Similarly to Russian, Polish grammar often implies and omits indefinite articles like “a” and “the.” Y’know, in case you were curious as to why this one does that. Because it does.

I like the overall presentation, but it’s not without flaws. The music is pretty good, some tone-setting industrial beats that are perfect for the pace of the action. Character art is decent, and the more I play the more I like John and Alexa’s dialogue. Everything in the levels is pretty clearly presented with the proper distinguishing colors, and it all sounds and looks pretty satisfying. But I have two gripes: 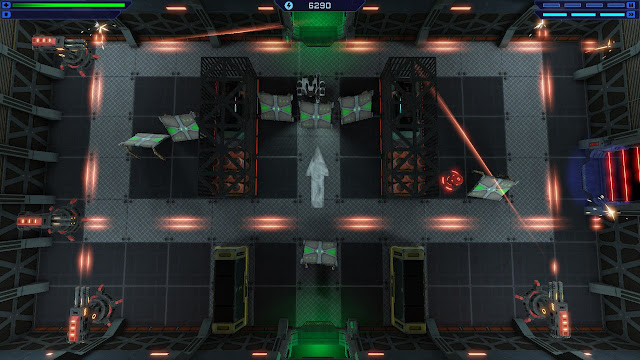 The first is that the damage threshold for your screen border to start throbbing red and warning you that you’re close to death is set way too high. I don’t know exactly where, but I know you can still have at least 60 per cent health and it’ll start warning you. In fairness, you can die pretty quickly, but I found it unnecessary and distracting that the game is so keen on telling you you’re in trouble.

That one you get used to, though. Gripe two is much bigger: enemies struck by your attacks don’t flash red, but breakable objects do. That makes it tricky to gauge how much health an enemy has, and they already lack health bars. Not to mention, there are some cases where you think you should be hitting them, but you might be missing them entirely, slipping in between your two blasters. Flashing indications allow the player to focus on character placement, and exist to give us that hit confirmation without distracting us from dodging stuff. I want to say this is especially annoying on the last boss -and it is – but it’s really annoying everywhere.

Still, the gameplay is solid, and surprisingly difficult even on Normal. Enemies have a truckload of health for your puny blaster at the start, and you die pretty easily. Whether this was intentional or not, I love a good challenge, and this will force you to think your strategies carefully for each room. As an added bonus, if you die in a room, you can just restart back in the same room with no penalty. This is a nice counterbalance that doesn’t feel too out of place given how quickly and unexpectedly you can get torn to shreds, but it also feels like one of those “infinite lives” cheats of yesteryear have been switched on. Removing any loss of progress, even currency, seems to remove a lot of threat of danger. To their credit, you don’t start with replenished ammunition or health, so sometimes restarting from the start might be necessary. Some later rooms, especially in the last two stages, require a lot of trial and error.

There are some puzzle/platform elements scattered about, which are a nice mix-up to the usual shooting action I was expecting would be from start-to-finish. They’re infrequent and relatively short-lived, but they’re a welcome addition. Each room has a little surprise that’ll have you rethinking your strategy quickly. With surprise after surprise, you’ll want to keep playing to the end.

Alas, Mech Rage does end, and its nine levels can be completed relatively quickly. There’s no high score posting either, so despite it having a scoring system, it might as well not, unless you have a busy social network that would actually care about your top score screenshots. You beat the game and it pops you back to the title screen, with the option to Continue, just before the last stage again.

I’m struggling to recommend this due to its length. It can be completed within an hour. Not that it’s a bad hour, but there are games cut from the same cloth that boast tens or hundreds of hours of playtime from individuals, such as Enter the Gungeon or Binding of Isaac, with the roguelike features that are practically par for the course these days. And these are years-old games, making this feel all the more behind the times. Mech Rage is fun, and it looks like a lot of effort went into it, but it comes across more as a proof of concept for something that will be much more ambitious down the track. That being said, I wouldn’t be averse to seeing DLC that turned this into the roguelike dungeon crawler it’s dying to be. But with these elements absent, it’s not so much a “dungeon crawler” as it is a “dungeon crawl.”