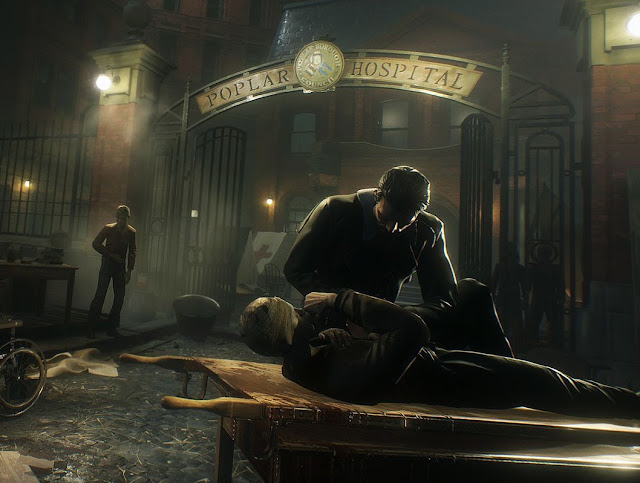 Dontnod’s modus operandi is to put players through difficult moral choices. It was brilliantly executed in the masterful Life is Strange, but then that game was effectively a choose your own adventure. And as we all know, games without “gameplay” are immediately relegated to the hyper-niche. With Vampyr, the developer has gone for a broader audience by layering combat and other RPG mechanics into that narrative-driven desire to make players make difficult decisions. The result is a game that certainly feels more ambitious and “gamey”, and therefore it is indeed tailored a wider audience than the quaint and experimental Life is Strange. It’s the blockbuster Dontnod experience, in other words, though it’s hard to shake the feeling that the gamey elements weren’t actually needed.

Related reading: Our review of the first episode of Life is Strange

The game is clearly inspired by Anne Rice, the brilliant author who took the basic vampire myth and used it to explore a number of philosophical and moral questions; how would vampires handle the shift in mindset, in that they need to start preying on the people they once were? How would vampire culture evolve, and how would vampires associate with one another? Under Rice, vampires ceased to be the ultimate monster of the night, as per Bram Stoker. Instead, they became relatable, as per the vestiges of humanity that remained a part of them, and that made them far more interesting characters to explore and study.

Video games have rarely bothered to look at vampires as complex beings. To video game developers, vampires are either the end boss (hello Castlevania), or they are the “hero” with an endless pile of clichés that are used as gameplay mechanics to provide some easy differentiation from other action games (hello later Castlevania titles). There has been one notable effort to take vampires beyond the generic and the monstrous – the World of Darkness-based Vampire: The Masquerade titles – which were decent enough in their own right, but Vampyr is the first to really push the vampire story into the same spaces that the likes of Anne Rice have occupied in other media. 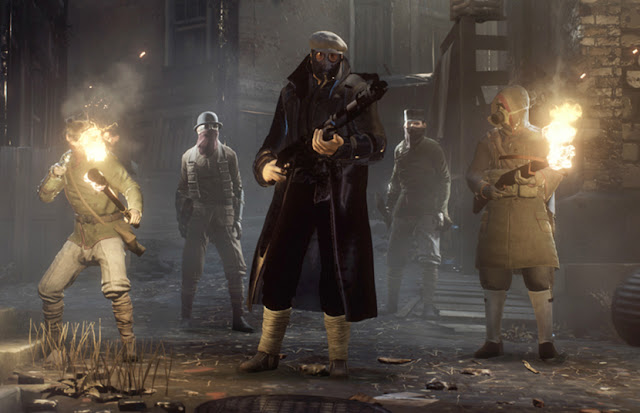 Vampyr tells the story of a doctor who has been afflicted with vampirism against his will, and finds himself simultaneously recruited into a hospital struggling to handle a disease-riddled London, and hunted by the mobs of Londoners who are terrified of the stalkers in the night. Our “hero” has one fortunate thing going for him – the head of the hospital knows what he is. He’s a normal human, but fascinated by the idea of vampires, and willing to put faith in the goodness of the doctor. So the head of the hospital works with the good (potentially) doctor to conceal his identity, and give him the freedom to do what he needs to do. That is, the doctor gets the cover and support he needs to help patients in the hospital, work out what’s going on among the creatures of the night, and understand his own role in it all.

Or perhaps just go on a rampage, drinking the blood of everyone in sight. It’s really up to you as the player.

It takes the game almost no time to start throwing one moral problem after another at the player. Usually these take the form of elaborate trolley problems. For those who aren’t aware of that particular moral thought experiment, the trolley problem posits that there’s a runaway train on a track that splits in two. On one track are a group of people tied up on the tracks. On the other is one person. “You” are a third party with the power to pull a lever. If you don’t pull the lever the trolley will run down the group of people. If you pull the lever, the tracks will shift and the trolley will hit the one person. The question at the heart of the problem is whether it’s right to pull the lever. 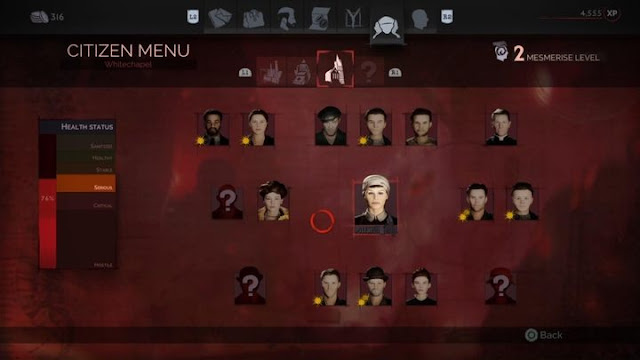 There’s no “right” answer, as such, because there are multiple different perspectives to take. For example, while it’s easy to say one death is better than a group of people dying, the common alternative point of view is that to pull the lever is to actively participate in a death, while not pulling the lever means that you’re not a participant on any level, absolving you of the evil that is going on.

Vampyr is filled with these kinds of moral decisions, where you’ll have the option to kill or otherwise harm some, in order to potentially save or benefit others. Mechanically this plays out through a couple of different gameplay structures. On the simplest level, the best source of experience points in the game is to feed on non-combatant people. Completing the game without feeding on anyone is, indeed, very difficult. Furthermore, some of the people that you’ll come across you’ll just want to chow down on, and not just because they’re unpleasant people. One of the first people I decided to make a meal of was a guy that was clearly suffering from extreme pain, with very little anyone could do for him, and as an advocate of euthanasia, I found putting him out of his misery to be a very just thing to do.

This is complicated by another mechanic, where you will need to spend time and resources helping these people. As a doctor you can brew up medicines and similar to heal most people, and this “improves the quality of their blood,” meaning that you’ll get more experience from them if the doctor then feeds on them. But, in return, you’ll be learning more about the people then, and the stores are masterfully written to ensure that the more you learn, the harder and harder it becomes to see them as a vein of experience points. It’s the same reason farmers don’t give the animals in their flocks names – the closer you get to something, the naturally more difficult it becomes to do harm to it. 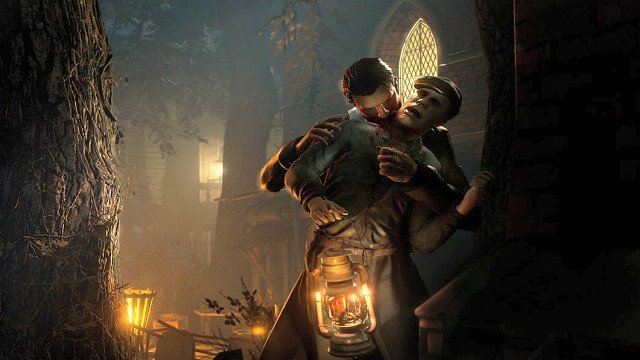 But you’re going to have to work to heal people, because with each new day, diseases in the area have the affect of lowering the blood quality of the overall area, and once it gets low enough, the area degenerates into a fearful chaos. This also happens if the doctor feeds too heavily on an area. So you’re effectively forced to be a “good doctor” too… or at least in some parts of London that you wish to keep relatively safe and calm.

All of these systems come together to force you to carefully weigh the consequences of every action. It will mean that there are people that will need to die, but selecting the right victims is of paramount importance. Ideally you want to track down the ones that offer good consequences to the city and its people beyond the XP boost. Beyond the mechanics every major action you take has narrative consequences too, and the best thing about Vampyr is that all of this feels like something more than a hunt for the “good” or “ultimate” ending. I found myself so invested in the world and its characters that I wasn’t really thinking about the endgame that I was angling towards. Instead, I found myself allowing my own moral guidance to make these determinations. I have no idea if I will be more “gamey” in a second play through, but the first time around, Vampyr weaves quite the nuanced story.

It’s also a stunning vision of London itself. London is a location that has a long heritage in the vampire mythology. It was the backdrop for much of Stoker’s Dracula, and real life stories such as the Jack the Ripper murders has made it a perennial favourite for urban horror storytelling. Dontnod has clearly done plenty of research to create an authentic London, with the close-knit buildings and narrow water canals creating an oppressive, claustrophobic effect in the inky blackness of night. Those places that become pools of humanity and light within the oppressive, winding streets – a tavern over there, or the hospital itself – feel like genuine islands of respite, which makes their ever tenuous grip on order something terrifying to behold as it starts to slip away. I’ve long said that horror and RPGs aren’t genres that are rarely compatible, because there’s a primal nature to horror that clashes too heavily with the more cerebral thought processes that an RPG encourages, but Vampyr is very much the exception to the rule. 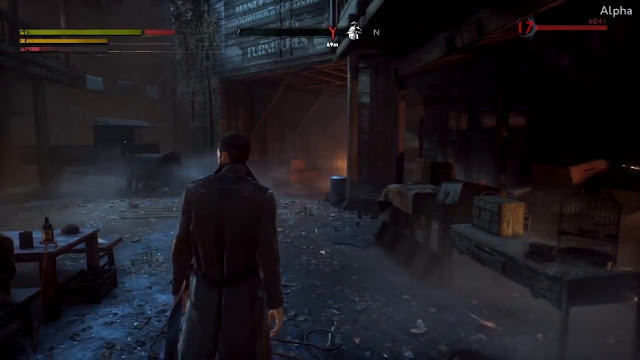 What lets the game down to a degree is the part of it that it doesn’t even need: the combat. Remove the combat from Vampyr and you’re left with a game that has lost none of its impact or potency. With the combat, though, you’re forced into “combat areas” which function much like dungeons in other RPGs – you’ll be moving from “room” to “room”, fighting enemies in what feels like a clumsy attempt to emulate a Dark Souls game. In theory you’re meant to dance around your opponent, ducking and rolling before counter-attacking, but the duck action isn’t responsive enough, and enemies lack subtlety. I grew tired of these moments soon enough, and actively avoided combat wherever possible.

It’s a pity that the fights weren’t more engaging, because the RPG system underneath them is beautifully designed. The depth of skills allows for some incredible customisation of your character, and because the experience points that you need to use to unlock and improve skills are so hard to come by (unless the doctor is feeding on everything that moves), I found myself very carefully weighing up how to develop my character.

Vampyr is the vampire story that I’ve waited for many, many years for. As a fan of Anne Rice and the deeper tales around vampires – and as a fan of stories that are focused on moral conflict and consequence, Dontnod have crafted something that feels custom-designed for me. Yes, the combat itself isn’t anywhere near up to the standards of the genre’s best, but to do anything but dismiss it as a mild inconvenience in the grander themes of the game is to fixate on the least important facet of the game, and to do it a great disservice. Vampyr, based on what I’ve seen other people say about it, is will on track to be the most misunderstood and under-appreciated game of 2018.