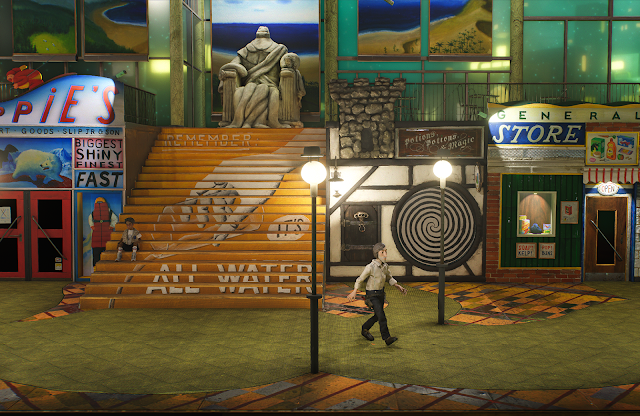 If you blinked during Microsoft’s speedrun of ID@Xbox titles, you may have missed any one of the game’s featured. Blink at the wrong time, however, and you would have missed Harold Halibut from Berlin-based developer SlowBros. Of the nearly two dozen titles shown during this portion of the briefing, it’s only Harold Halibut that made me want to know more.

To begin, I’m quite steamed at myself for missing the game’s run on Kickstarter last year; it is not like me to pass up an appealing indie title that needs backing — just ask my colleagues here at DDnet, as they get first pick at codes from games I back but can’t play because it’s on PC. Throw in the stop-motion animation and the name (I love illiteration!) and I would have been all over it had I have not apparently been buried under a rock. So to rectify this tragedy, I would love to shine a spotlight on the title.

Related Reading: If you’re looking for a stop-motion game to play in the meantime, consider Armikrog! My review here.

Part of Harold Halibut’s infinite charm is actually it’s creation story. A dinner conversation about the games played as children morphed into building sets the size of dollhouses and puppets with walnut-sized heads. The detail at any scale is absolutely spot on, and it’s been a long time since I’ve seen a video game so obviously lovingly handcrafted (literally out of crafting supplies).

Harold Halibut is as fishy as it’s name — no, not in a suspicious way, but because it takes places underwater! A young janitor aboard a space ship’s wreckage has been tasked at assisting a scientist relaunch the ship. Despite being located on an underwater spaceship wreck, day to day life can be quite mundane for those aboard. Don’t worry though— there are secrets and you will find them!

Best described as a point-and-click adventure — my jam! — Harold explores some crazy beautiful settings and solves puzzles along the way and speaking to his shipmates. Here’s a full trailer from last year:

Harold Halibut will be released on the aforementioned Xbox One, as well as PC and PlayStation 4, later this year.