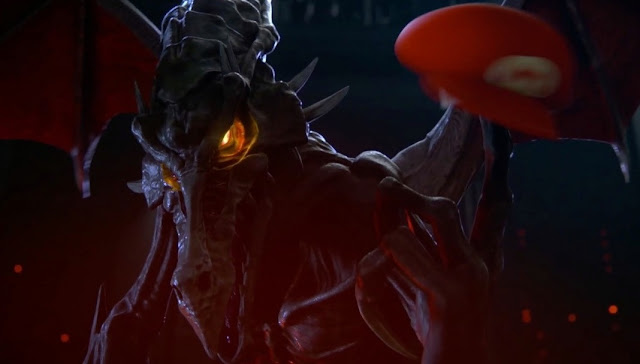 Nintendo gave an exhaustive breakdown of Super Smash Bros. Ultimate at E3, revealing nearly 70 playable characters and dozens of stages. It seems not everyone is familiar with the newly announced character, Ridley, though and that upsets me.

Appearing way back in the original 1986 Metroid, Ridley is responsible for the vicious raid on Samus’s home world that killed her loved ones. So yes, Samus’s personality and choice of occupation can be directly traced back to him. He’s also a giant freaking dragon Space Pirate who has been cloned, cybernetically enhanced, frozen, and absorbed over the years. Despite his brutish appeareance, he’s deceptively intelligent and eerily persistent. So persistent, in fact, that he’s appeared in nearly every Metroid game to date (and even showed up in Dead or Alive just to ruin Samus’s day).

Ridley is also one of very few “pure” villain characters in Smash. King Dedede is a selfish goof but protects his people earnestly. Bowser is typically nasty but has sipped the cup of heroism and is often relegated to comic relief status anyway. Wario began as a wicked thief but became a bigger saviour than most heroes…only for the wrong motivations. Wolf is just a bounty hunter and has put aside his differences with Fox to fry bigger fish. Ganondorf is billed as a symbol of pure evil so he probably qualifies, but some still defend him as being “corrupted” or swear certain incarnations had good intentions. Ridley is…an unsympathetic, unrepentant demon that derives sadistic pleasure from slaughter.

The pterrifying pterodactyl is no stranger to Smash either. He’s appeared in all of them as a background prop, boss, trophy, stage hazard, or some other sideshow act. Ridley showed up on time and paid his dues but that never sufficed for his Nintendonian overlords. His fans adopted his never say die attitude, though, and have been campaigning for him to appear as a fighter since Super Smash Bros. Melee. It should have been a killing blow when series creator Masahiro Sakurai stated in a 2008 interview that his inclusion would be “pretty impossible” due to great difficulty scaling down the dragon. The debates, flame wars, and “too big” memes rained down for another decade despite similarly decisive-sounding Sakurai statements…until now.

So he’s finally here (performing for you) and he looks positively stunning. His cold eyes, scaly textures, and savage animations bring a level of intimidation unmatched by any fighter in the already massive roster. Fittingly enough, Sakurai outright acknowledged after the main conference that Ridley’s inclusion is largely the result of his undying demand, especially from western fans. Nintendo knew exactly what it was doing by ending E3 with Ridley.