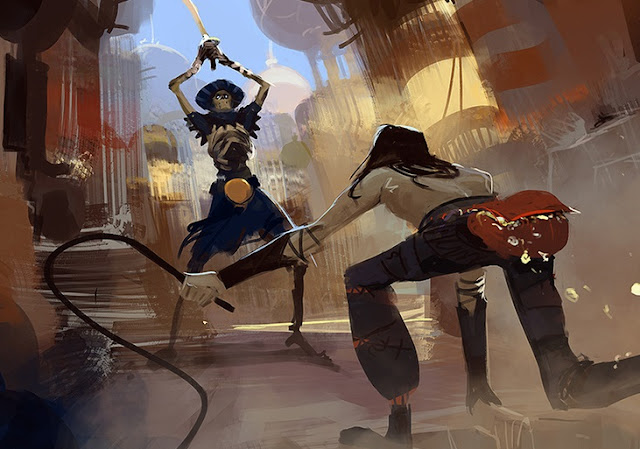 City of Brass is such a rare treat. Set in the heart of a 1001 Arabian Nights story (one of my favourite books of all time), the game offers all those fantasy Middle Eastern aesthetics and themes that I love (but rarely get to see), wrapped up in high production values, slick, engaging and challenging gameplay, and substantial longevity. In short, I really, really love this game. And, as the icing on the cake, it’s made by an Aussie outfit.

Related reading: The previous game from this developer was Submerged. Our review of that one

The City of Brass is a fabled city of treasure and danger within the compendium of tales that form the 1001 Arabian Nights. In a sense, it’s the Islamic world’s equivalent to Atlantis, and plays much the same role; a dangerous, deadly, and lost ancient city, filled with unimaginable horrors but even more unimaginable wealth for the brave adventurer that finds it.

1001 Arabian Nights is also a collection of stories that are not unified by genre or theme. Some are high-magical fantasies of various genies and other such monsters. Others are swashbuckling stories of piracy. Others are stories of political intrigue, while still others veer into oddly science fiction or horror themes. The City of Brass is a distinctively horrific tale of this ghost city and, in some ways acts almost as a forerunner to something like H.P Lovecraft’s At The Mountains Of Madness. There are fewer eldritch terrors from the cosmos, but the atmosphere and otherworldly tone that the story frames this city has invites comparisons. And it is a city described in vivid detail within the stories, making it one of the most memorable locations – and indeed stories – in the entire 1001 Arabian Nights collection.


As a big fan of 1001 Arabian Nights, it actually distresses me how infrequently it’s used as the source for stories, be that from modern writers, films, or video games (at least, here in the west or what little gets translated to be brought out here). It’s such a stunningly exotic setting, with such incredible aesthetics, backed so easily by the beautifully distinctive musical instruments of the Middle East, that I have always thought that creatives would be drawn to it. There have been a couple of games that have been located within a fantasy Middle East without belonging to 1001 Arabian Nights – Magic Carpet, Al-Qadim, Prince of Persia and The Heroic Legend of Arslan – but these are few and far apart. So I’ve been following City of Brass so very closely, hoping it would fill that void.
Related reading: An interview with the developer of City of Brass

Sadly, it lacks much by way of storytelling. Or, more precisely, aside from a couple of small comments that pop up through a brief tutorial, it has no storytelling whatsoever. There’s some emergent narrative in the simple act of exploring the city, but even that’s compromised somewhat by the game’s nature as a roguelike, with randomised level design meaning the developers couldn’t design some kind of tale into the labyrinth. Perhaps the team was concerned that any attempt at storytelling would be seen as appropriation, coming from Australians who are probably more fans of 1001 Arabian Nights than active participants in Middle Eastern culture, and that’s fair enough, but it’s aching to know how close this game comes to being near perfectly aligned to a game I’ve long dreamed of, but never had the talent to make myself. And doubly aching to know that this team knows how to tell amazing stories, as we saw with its previous project, Submerged.

But what narrative is in the game is instantly engaging and rich in detail. As you explore you’ll find all kinds of treasures of gold and jewels, which set the “Indiana Jones treasure hunting” tone perfectly (especially when combined with the whip weapon you carry at all times). The enemy designs are perfect, too. They start out with being little more than dessicated husks and skeletons and – much as I hate to make the comparison – these leave a very “Dark Souls-like” impression at first. That is to say the enemies are slow and ponderous, and you’ll hear their groans and otherworldly chatter from behind doors and the like, but they can also be incredibly deadly if you go into battle with them unprepared. 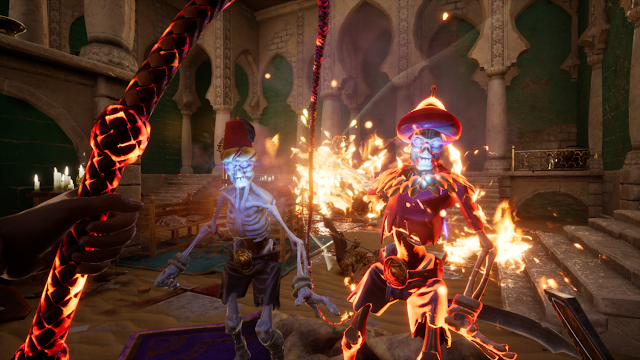 As you progress through the game, enemies become progressively more varied and imposing in design, but from end to end every single one of them is spot-on perfect. You’ll spend most of your time in the game either looking out for the enemies, or fighting them, so the fact that they nail the aesthetics in line with the tone set by The City of Brass story really helps make the game completely immersive as a work of Middle Eastern fantasy.

Related reading: My favourite 1001 Arabian Nights-themed game is still the RPG, Al-Qadim. Here are my thoughts on the game

The gameplay is so slick, too. There’s been more than a few of these first person roguelikes in recent years (Immortal Redneck et al), but none have done as much with the mechanics to set themselves up as something distinct and original as City of Brass. In the one hand you hold a blade. In the other, a whip. The whip can be used to navigate around the environment, or to stun enemies (or take their feet our from underneath them). This is important, because it then becomes easy to wade in and slash at the enemy with your sword. Mastering the interplay between both weapons is important, because individually (let alone in groups) enemies are faster, stronger, and more deadly than you want to risk without using that whip to even the odds first.

There are some other tricks you can use to help give yourself an advantage. Scattered around levels are pots and flaming objects that can be hurled at enemies. And throughout each level you’ll also come across genie merchants, which will (among a wide range of other things) sell you better equipment or power up items. A favourite of mine is an item that means that enemies don’t initially recognise your presence. Instead, they’ll stand around for a few seconds while a bar above their head fills up (a little like the system that Assassin’s Creed or Metal Gear Solid uses to determine when an enemy spots you outside of hiding). Those precious few seconds are critical for getting yourself into a vantage point where you can use the environmental traps and the like as an ally, because your enemies die to them just as easily. 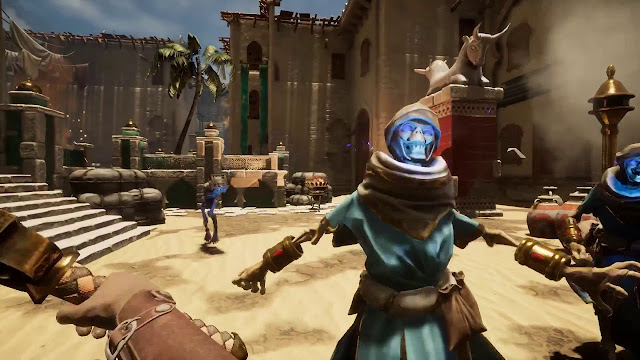 Brought together, this game’s combat system is both furiously fast, and at the same time, elegant and tactical. And hard. Oh boy is City of Brass hard. With each death it’s back to square one for you, making progress painfully slow at times, particularly if you ever take things for granted and try and rush through. The random nature of levels and enemies also means that sometimes the difficulty is set astronomically high, because you’ll run into a room with a combination of threats that is simply brutal. There are some progression systems that help to smooth you through the earlier levels after some grinding, but never is City of Brass easy. And nor should it be. This is a haunted, deadly city. The difficulty of a roguelike suits it.

Related reading: The ten best games set in a fantasy Middle East (not including this one, obviously)

All that lets the gameplay down is the occasional imprecision, where things that should have been toasted by a fire attack are not, or a sword that should have cleaved a zombie skull in half refuses to swing for a that critical quarter of a second. For a game that is as challenging as City of Brass, those moments can be deadly. They happen infrequently enough so as to not disappoint me, but there was one time where I was having the run of my live, only for a bug like that to give a relatively mild enemy the opening he needed to flatten me. Oh how I howled in agony there.

Even despite the lack of narrative – and I really, really want more narratives based in 1001 Arabian Nights – this game is a strong contender for my favourite game in 2018 to date. In terms of presentation in punches so far above its weight that I class it in the same league of indie titles as the likes of Hellblade. Couple that up with the most amazingly dynamic (and original) combat system, a rewarding, challenging difficulty curve, and stunning setting, and I don’t see myself putting this game down for a very, very long time to come. And who knows, this might just be the start of what Uppercut Games would like to do with the exotic sands of the desert and the genies of the Middle East.