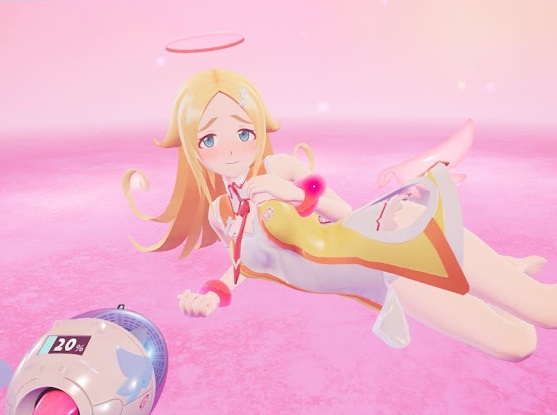 Gal*Gun: Double Peace was a much smarter game than most people gave it credit for. It was trashy—and I don’t mean that pejoratively—but through that B-grade tone it achieved a pointed satire of a lot of common tropes seen in anime and games.

Gal*Gun 2 has been built up to be, well, a sequel: bigger, bolder, and more ready to push boundaries. It certainly achieves that in terms of pure gameplay, but it seems to come at the cost of the previous game’s clever parody. It’s good, trashy fun, but after Double Peace, I expected a lot more.

The big difference between Gal*Gun: Double Peace and Gal*Gun 2 is how that action is framed. Double Peace opens with the main character, high schooler Houdai, being accidentally shot by a supercharged arrow from a cupid angel in training. As a result, he becomes irresistible to every woman who sets eyes on him, but if he doesn’t profess his true love by the end of the day, he’ll be alone forever. Thus, Houdai spends the day trying to find his love and make his confession, while using a Pheromone Gun gifted to him by the clumsy angel to fend off his randy classmates (and teachers).

It’s absurd, but it makes perfect sense within the context of the game and its B-grade tone. More importantly, it sets up everything else that makes Double Peace as subversive as it is. Despite its exaggerated, comical sexuality, the whole game is about trying to get away from people trying to jump your bones. The game traverses a lot of the cliches of “pervy” anime games, but the narrative setup frames them in a way that puts a spotlight on how ridiculous they are.

Other aspects of the game build on that foundation. There’s a big dating sim component to Double Peace: dialogue choices and light stat management affect which of a number of different story paths you go down, who your true love is, and which ending you wind up with. There are plenty of lewd, rude, and downright creepy dialogue options (and even a “pervert” stat), but choosing those all but guarantees you a bad ending.

All of that’s gone in Gal*Gun 2. The new game begins with the nameless protagonist being chosen by an angel to help eliminate swarms of demons plaguing the school, using the latest in demon-hunting technology, the vacuum-like Demon Sweeper. A headset lets you see demons (and angels), but it also makes you impossibly attractive to women, so you also get a Pheromone Gun with which to fend them off.

Gal*Gun 2 still goes through the motions of what made Double Peace as smart as it was. You’re still running around a school, shooting dangerously love-struck girls until they collapse in a fit of euphoria. You’re still hiding out in places that would make you look like a pervert, if not for the fact that you’re trying to get away from the aggressive professions of love and lust. But without the narrative groundwork, it’s just meaningless lewdness.

Gal*Gun 2 no longer lets you see through clothes by zooming in with your gun, it doesn’t have any of those particularly infamous touching minigames, and Doki Doki Mode plays a much smaller role in the game. Those most lewd it gets is when you use a powered-up Demon Sweeper to suck a girl’s clothes off, leaving them in their underwear, but that’s something you can’t do that often. The result is that the lewdness feels less tongue-in-cheek and more like a reward—and one void of narrative context, to boot. It feels creepy, in contrast to Double Peace’s absurd humour.

The satire in Gal*Gun: Double Peace went right down to its arcade-style framework. It was a game built for repeated plays and high score chasing: a single run would take a couple of hours at most, and less if you were skipping cutscenes. The game plays out over the course of a single day, with each level logically flowing into the next, and relatively few short levels in each run.

In terms of the gameplay, the goal was to get a high-score, and to do that reliably, you needed to actually get to know the 80-odd different “enemy” characters as more than just targets to shoot. The better acquainted you are with each girl and teacher in the game, the better able you are to complete optional objectives within each level, the quicker you can give them euphoria, and the more reliably you could set off the very lucrative Doki Doki Mode.

Gal*Gun 2 is a much bigger game, taking place over 20 in-game days with two levels each, but there’s much less connection between them. A Score Attack mode lets you chase high scores for each individual level, but now there’s nothing stringing them together except a very flimsy narrative. There’s also a lot less focus on the unique traits of each individual girl, because those optional objectives that forced you to actually pay attention to their biographies are no more; in their place are side quests that are self-contained, but far more generic.

It’s because of all that that I can’t help but feel disappointed by Gal*Gun 2. It’s arguably a better game in terms of sheer playability: the shooting works better (especially on Switch, thanks to some well-implemented but optional motion control), the Demon Sweeper adds an interesting new dimension to combat, there’s more variety in mission types, and there’s just more to do in general. But for me, what made Gal*Gun: Double Peace special wasn’t it’s playability—it was the brilliant way it approached the very idea of a lewd anime game. In that regard, Gal*Gun 2 is a huge step back.