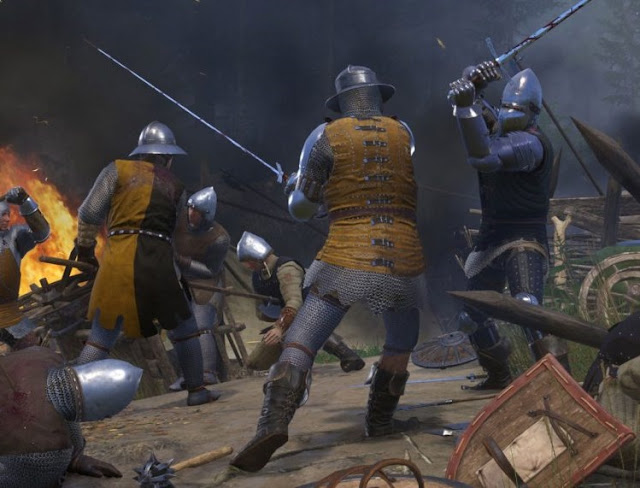 Kingdom Come: Deliverance confuses me. On the one hand it seems like it’s a game made by people with a genuine care for their history. We don’t get many games that depict central or eastern Europe history with any kind of authority. Games set in Europe that aspire to historical authenticity default to western Europe, its culture, people, and approach to warfare. The rest of Europe is different to Spain, France, England and Germany, and it’s a noble thing to try and use a game to better educate people on this part of the world.

And I learned things I didn’t know previously, right from the broad political environment of the period, through to minor cultural quirks and traditions. My knowledge of the history of the Czech Republic, Slovakia, Hungary and cities like Prague through to village lifestyle of that era is limited, and I appreciated that the game encouraged me to learn more. The passion in there in this game is so clear to anyone playing it, and it’s infectious in that passion. That it’s backed by a game with enjoyable combat and world design is icing on the cake.

But why does the game let itself down so often by being so juvenile at other times? It makes it that much harder for me to appreciate the good this game does when it’s balanced out with a perk like “manly odour” which somehow boosts your statistics. Or an “alpha male” buff, which again gives you a boost to your charisma, which you get for visiting a brothel. Yes, I appreciate that most cultures in Europe back then both had a poor sense of hygiene and were deeply misogynist. Depicting that makes sense in the context of the realism that this game was aiming for. The informative historical ‘codex’ entries that you unlock in the game reinforce the historical realities of life back then. But of all the ways to depict this in a game, I can’t think of a less mature, more “frat house” way of doing it than turning it into ‘humorously’-titled character perks. The love of research and the effort that’s gone into the game deserves a better in-game treatment than that. If the game wanted me to take it seriously as a historical epic, the inconsistent tone of the writing and structures don’t help it. Especially when those structures see, to be almost nostalgic for what they’re depecting, rather than satirical in a critical sense. 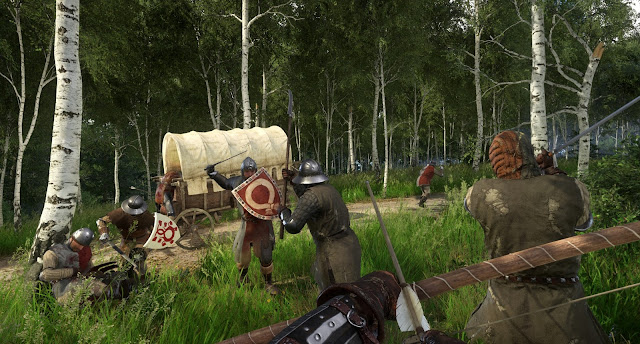 And don’t even get me started on the mechanic whereby you need to consume alcohol in order to manually save your game. Yes, alcohol consumption was a big part of life back then, but again, implementing that historical reality as a save game mechanic just makes it feel like it came from a late night of heavy drinking at a frat house.

I won’t go on, as I don’t want my entire review to be filled with examples of where I’d come to the cusp of loving what the game’s trying to achieve, only to be dragged back to earth by some example of immaturity or other. There are other issues with the game… and then other stuff that I want to highlight as things I found truly wonderful about the game.

Firstly, Kingdom Come is a bug-riddled mess at times, which I won’t dwell on, because the development team has already pushed out two massive patches for it, and I’m certain that this is a developer that will listen to its community. Design elements are a bigger problem. For example, there’s a law that you must be carrying a torch when out and about at night. Fair enough – it’s an interesting real-history thing that I wasn’t actually aware of. Kudos for actually going as far as to turn that into a part of the game. The problem was that if I didn’t have my torch out, the guards would harass me… while a dozen other townfolk happily wander around me without any light sources whatsoever, and the guards ignore them completely.

The game struggles in maintaining a consistent logic, too. For example, early on I escaped a hostile army and took refuge in a neighbouring castle. Deciding that I was valuable, the lord of the castle told me that I was not allowed to leave, and instructed the guard to refuse to let me out. A helpful lady told me the best way out would be to dress up in the soldier’s garb and sneak on past… so I broke into the armoury and tried to unlock a chest where I assumed the soldier’s armour was. I was caught doing that and throw into prison. A few days later I was let out… outside the castle. I guess I wasn’t worth keeping around any longer? That wasn’t explained very well.

Another time as part of a story mission I was given I got into a brawl with a noble, and then the lord of the village broke it up. Both of us were scolded for disturbing the peace (and fair enough), and then we were told to meet up the next day to go hunting and learn how to get along. As soon as that cut scene was ended I was arrested for brawling and thrown into prison for five days. Thankfully the noble didn’t seem to care he was waiting for me to show up for the hunting trip for five days straight.

And then there’s the fact there’s alchemy. In a game that takes pride in its realism. All these inconsistencies build up over the game’s run time. Kingdom Come’s problem is that it doesn’t try to be authentic, as other history games (like Dynasty Warriors) do. It makes it clear that it aspires to be realistic, and in that attempt it lets itself down with its inconsistencies over, and over again. 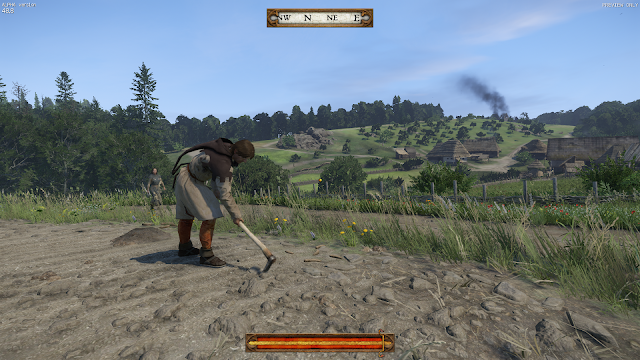 Again, I must emphasise that all of that is a pity, because the game manages to be so good in so many other ways that I was frequently finding myself enjoying the game a great deal. The production values are sublime, and the combat is where that aspiration to realism really shines through. Being able to attack your opponent (and defend their attacks) from multiple different angles, while also compensating for the weight of the weapon and the effect heavy metal armour has on a person’s stamina is all very impressive. I have actually tried swinging around a medieval sword before. They are heavy. This is the first game that truly, genuinely, gets that.

I’m also really impressed that the game ratchets up in difficulty incredibly quickly if a second combatant enters the fray. Just like in real life, taking on two or more people at once requires a great awareness of everything that’s going on around you, and, of course, the opponents will try and set up flanking opportunities where they can hit you from both sides. The odds are very stacked against you in a 1-vs-2 situation. Kingdom Come’s AI is impressive enough to make the swordplay challenging through the system itself – by making them better at executing attacks from all directions, better at blocking, and better at dodging. Not just by improving an enemy’s statistics. It’s how games should set player’s challenges, as it’s less arbitrary, and therefore infinitely less frustrating.

The design of the world itself is spot on, too. It’s an open world, but a far sight different to what you usually see in other open world games. Pull up a map and you can be sure that every icon that you see on the map has a genuine reason to be there. Kingdom Come is not interested in having you collect things for the sake of it, to pad out its length. The game works hard to ensure that its quest structure is more in tune with how the epics of old were written. 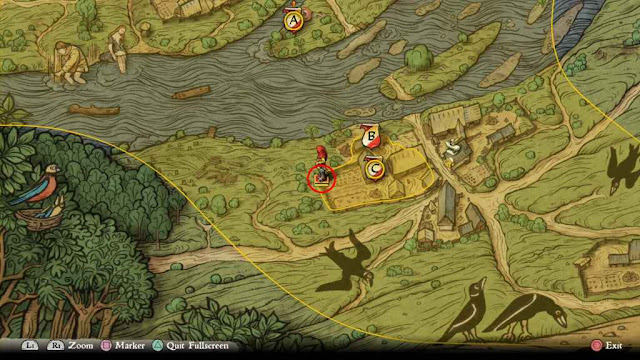 The actual period of history that the game is set really is fascinating, too. It covers a time of conflict between the King of Bohemia, Wenceslas IV (no, not the Good King Wenceslas depicted in the Christmas carol, as I initially thought – that’s how little I knew), and his half-brother, Sigismund. As was the norm for that era, when two kings had a conflict, the common person was the first to suffer, and in this case, our protagonist’s home village is sacked, and his parents slaughtered. His adventure starts as he vows revenge over this (and fair enough), but that story’s almost secondary to the simmering political and social tensions that the game depicts through this volatile time.

For example, the survivors from your village seek refuge at a nearby city, which very grudgingly takes them in. For hours, in every second conversation you’ll have with residents of the city, they’ll be telling you they want nothing more than to throw the refugees out for being a “drain on resources” or “thieves”. It’s certainly not a position that the game encourages you to agree with, and given the real-world political environment around refugees, I’m impressed by the game’s willingness to take that theme and plotline on in the way that it has.

But for every positive thing that Kingdom Come does with its storytelling, setting, and themes, it then lets itself down with childish writing, and then doesn’t help itself out by being so ambitious that, even beyond the bugs, the game has structural issues that are difficult to ignore. I wish I could get a hold of a bibliography of historical texts and sources that the team used when creating the game, because they’ve certainly sold me that I should know more about Czech history than I do. I think they’d consider that mission successful then, because from the clear passion that went into the game I do honestly believe that the principle goal of the development team was to inspire people to learn more about their culture. I just wish I could take the game itself as seriously.

Is 2018 the year of fighting games? Also realism in games and The Caligula Effect (Digitally Uploaded 2018, Episode #6)