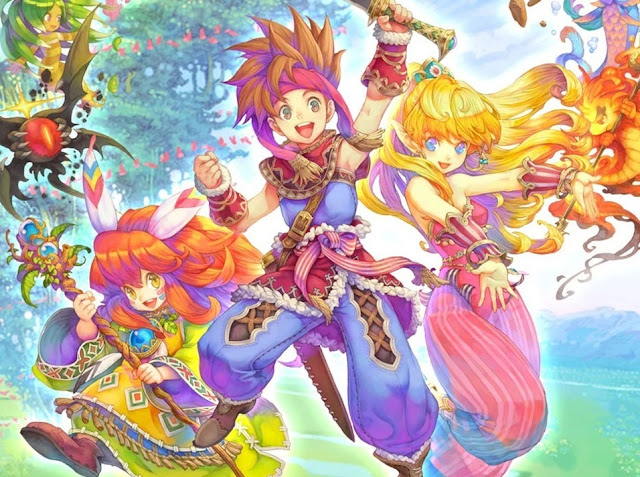 For the original Secret of Mana, the sprite work is critical to its appeal. Those sprites were gorgeous and artful; a near perfect example of how abstraction through pixel art can really help to carry a game’s narrative. Those sprites really did supported the narrative; JRPGs back on the Super Nintendo had more minimalist storytelling, with clean, efficient use of words used to push players around the world and deeper into the plot. It was up to the art to delight the imagine and convince the players to pay attention to every word spoken so that players miss nothing.

The Secret of Mana’s remake throws that balance right out of whack. This is effectively a modern looking game. It’s not of a blockbuster standard, but the character models are highly detailed, environments are rich in colour, and the animation is slick. It looks like it would be a game from a modern indie developer, but that has been paired with a story that’s a couple of decades old. As I was playing I found myself questioning if the original Secret of Mana’s story really was as… minimalist… as what I was seeing. It’s been a while since I last played the original Secret of Mana, so I was doubting my memories of that game, so I even went back and played it through again, and my memory was right; this really is a close port. So why did it feel like the narrative was too simple this time around, when I was so perfectly content with it for decades previously? Context is everything, and where Square Enix may have gotten away with the 3D remakes of Final Fantasy III and IV because the remakes themselves used primitive 3D engines that looks appropriate to the game, the disconnect between the modernity of the visual engine in the Secret of Mana remake, and the story it tells, is just too much of a discrepancy to resolve, meaning the game actually feels more shallow than it needs to be. 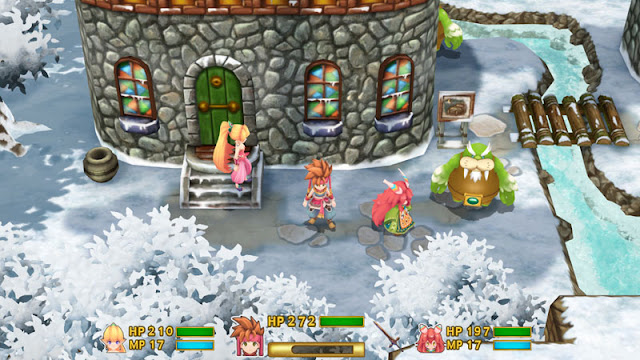 The other issue with giving the game a modern presentation is that other issues that are easier to ignore in the context of a “SNES” game are far more prominent – and noticeable – here. Secret of Mana is an action JRPG, but it never had what could be called brilliant AI. The game was memorable for its minimalist storytelling, stunning aesthetics, amazing soundtrack, and the ability to play three player multiplayer, which was an incredibly rare treat back in those days. It wasn’t know for challenging players with smart enemies or having brilliant AI allies that could pull you through in a pinch. But in this remake, the AI is that much more noticable and aggrevating. Characters getting stuck on scenery becomes a persistent issue, suggesting that the 3D environments are all the more challenging for the AI… which hasn’t been improved from that SNES release.

Equally irritating is the imprecisions in the combat system. Hit an enemy and it tends to topple over, giving you some respite before it gets up and attacks again. While it’s down, you get no feedback if you try and attack it again, though. So you’ll hit it while it’s down, wonder if you’re doing anything, and when it stands up it’ll often flip right back over again, with more numbers floating up on screen representing further damage it’s taken… by which point you might well be over the other side of the map dealing with another enemy. Because Secret of Mana is at core a strategic combat system – relying on you allowing a percentage meter to fill up between attacks in order to maximise the damage that you’re doing, this imprecision is more than a little frustrating to deal with.

For new players playing the game for the first time, things get even worse. The map is absolutely useless in helping you to figure out where you need to go to next. Not such a difficult thing for those of us who have played the game enough that we’ve basically memorised it. You’d have to think that Square Enix wanted to use this remake to find a new audience for the game, though, and that map, along with the generally poor signposting, is something that modern players will have minimal tolerance for. 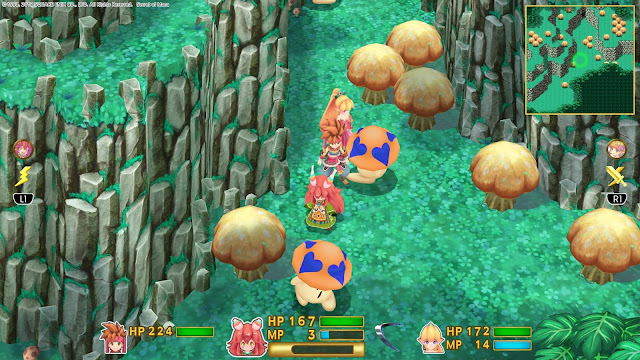 Meanwhile, Secret of Mana’s strengths as a game on the SNES, such as that multiplayer feature, is less of a drawcard than originally. The idea of playing an action JRPG in multiplayer is less of a novelty now than it was then. In fact, there is a glut of games that let you do that.

And all of this is why I can’t for the life of me understand why Square Enix didn’t simply create a new Mana game. The art is beautiful; Mana games are well known for having adorable monsters like rabites and mushroom things that throw their hats at you, and the way they’ve been designed in this game is beautiful. Mana games also focus on very simple – but elegant environmentalism, which means poignant themes (especially in the context of the world today) can be achieved with brief storytelling. It would have made so much more sense to simply build a new game and make it the latest in the Mana franchise. Then people would have been able to enjoy its charms – simple, but undeniable – of the game, rather than try and compare it to a masterpiece.

So this won’t be remembered as a particularly good remake, and it’s tragic, because by itself, outside of the shadow of the game it’s a remaster of, Secret of Mana has its charms. What it is good to see is that Square Enix continues to invest in these small scale JRPG projects. Last month brought us Lost Sphear, and now we have this one. I dearly hope that the middling response that the games have got from some quarters doesn’t discourage these kinds of projects, because JRPGs don’t have to be HD blockbusters to be worthwhile, and even despite its flaws in context to its heritage, this is an enjoyable, worthwhile game.

The Sinking City has me very excited, but also very concerned