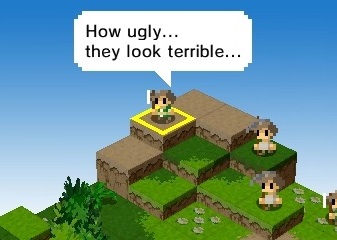 Ambition of the Slimes is a charming, clever little tactics game, though it often feels closer to a puzzler than something genuinely strategic. It’s not a game you’re going to be celebrating for years down the track, but as something cheap and disposable it’s a pleasing, lighthearted way to spend a couple of hours.

Though Ambition of the Slimes looks like a pixelated retro-themed tactics game, it has one clever trick that flips the entire genre on its head; you play as the weakest of all monsters in most JRPGs; the humble slime.

Your entire force will be made up of slimes, and in combat they’re all-but useless. Try attacking with them and you’ll be lucky if you even do a point or two of damage on enemies that have hundreds of hit points before you’re wiped off the map. Thankfully, all slimes have one useful ability to get around their physical weakness; they can leap down the throat of an enemy unit and possess it. From that point, it fights as though it is that unit, though if the unit is killed, the slime disappears off the map. 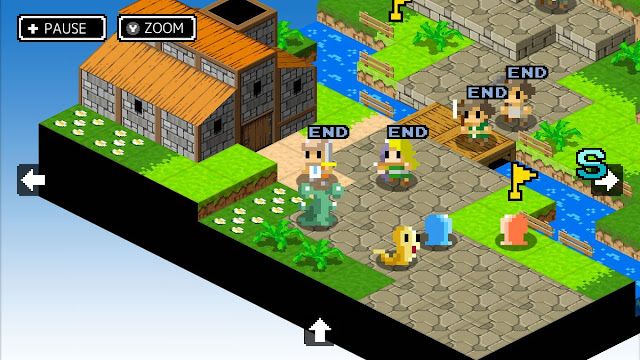 Some enemies are harder to possess than others. Generally the powerful units on a map need something done to them first (such as having a slime use a stun-like special power) before a slime can work its way past the unit’s defences. But, of course, possessing those units is generally preferable to taking over the weak peons. This structure means that the experience levels of units is less relevant in this game than in your standard tactics RPG. Once a slime takes over a body, it fights according to that unit’s statistics, so the typical map is more about figuring out how to reach the powerful units without having the slime attacked (often hiding behind weaker ‘common’ enemies), and then possessing them.

To help you in that, each slime has slightly different abilities. One is zippy around the ground. Another can teleport to anywhere on the other map. Still other slimes have give their target a debilitating effect. They lose those special abilities once they’ve claimed an enemy, but again, you’ll want to get them all to possess enemy units as soon as possible, so these abilities can help you to co-ordinate and achieve those possessions quicker.

As a puzzle-like tactics game, all of this works. Ambition of the Slimes is let down by enemy AI that is predictable, and therefore easy to manipulate, but the level design is generally quite good at adding different challenges from one map to the next. Each time you complete a map, you’ll have the opportunity to add a new slime to your crew, with more powerful slimes being “rare” and therefore you’ll likely need to replay a level a few times in order to get them. 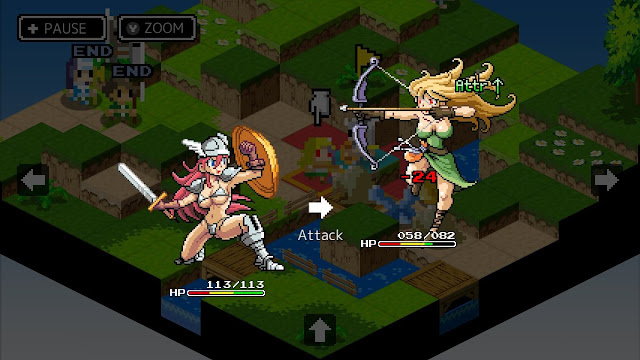 And that’s by biggest rub with this game; it’s very, very grindy, and there’s no relief from that. The narrative is simple to the point of non-existence (slimes are fighting back against humans who are arrogant and evil and stupid). It’s fun, and silly, and either that’s a result of inspired localisation of a really silly plotline in its native Japanese, or a bad localisation that is quaint and charming in a “you spoony bard” kind of way. Either way, it’s delightful, but far too minimalist for its own good. Between those bits of entertaining storytelling you’ll replay the same levels over and over again on every difficulty level to try and collect together the slimes that you’ll need to keep making progress.

Because here’s the thing; while the experience levels of the slimes aren’t overly relevant to being successful at a level, having the right slimes is, and often you’ll be stranded while you try and earn them, because the difficulty level spikes can be extreme. It probably needed to be, because if you were able to run through each level on the first attempt, Ambition of the Slimes would be over in a heartbeat, but I don’t think arbitrary difficulty this extreme has any place in modern game design.

The visual presentation fits the amusing concept and storytelling. Originally this game was designed for the 3DS. On the Nintendo Switch the tactical battlefield looks a little uncomfortable; the pixels are blown up too big and they’re a colourful mess – especially when you zoom the camera right in. But zoomed right back it’s tolerable, and captures that 8-bit primitive look that is so delightful when done well. When two units are battling, much higher quality sprites pop up, to swing away at one another. There are all deliberately exaggerated, stereotypical designs, for both the slimes and the humanoids. Chainmail bikinis and all. It all appears to be very self aware and tongue and cheek, though it would have been good to have more narrative context to help drive home the humour. 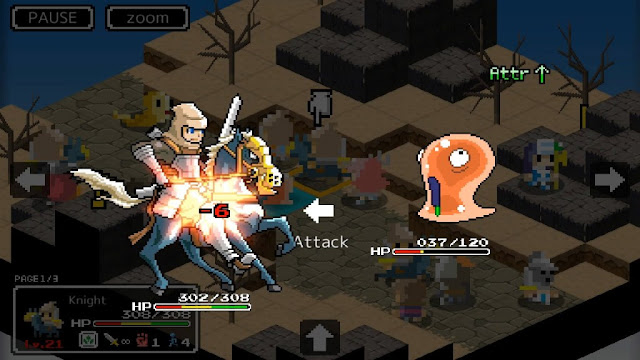 This is the kind of game that’s easy to pick up and play for a couple of minutes at a time – it’s very much “filler” in both tone and design. I’ve played this on both 3DS and Switch now, and I don’t think I’ve ever been able to play it for more than an hour at a time. And yet, in both cases, until I had actually finished it, I found myself going back to it again and again. If nothing else there is genuinely nothing else quite like Ambition of the Slime, and the concept of actually leading weak, largely defenceless units into battle is such a clever way to flip the tactics RPG on its head that it’s well worth looking into for fans of the genre, purely as a curiosity if nothing else.

The Friday Ten: The ten guest characters Koei Tecmo should get into Dead or Alive 6