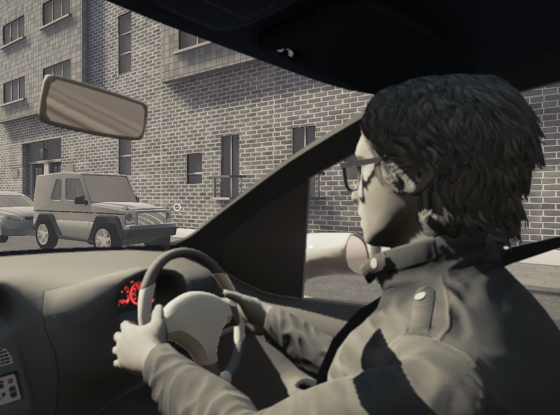 I’m not going to beat around the bush: Fragments of Him is one of the most emotionally charged games I have ever played. It’s actually difficult to use the term “play,” as the game takes you into someone’s life and literally has you act through it. There are few decisions to make, because it doesn’t matter. The result is always the same. And at a time where it seems choice in games is trending, Fragments of Him proves that sometimes a strong narrative is all you really need.

But I’ve already gotten far, far ahead of myself. Fragments of Him is the story of Will’s life – and death. This isn’t even a spoiler, it’s the basic premise of the game: from the start, we know that Will dies. What we don’t know is how he got to the thoughts he had that last morning, and for that we need to visit key people in his life. The game includes narratives from Will, to his grandmother, to his university girlfriend, and to the love of his life. Each story comes together to create a full picture of the man that is about to die. There is something beautiful about that. There are few choices, because the choices have already been made. Instead, I am merely a spectator in Will’s life story.

Will’s life, at the time of his death, is complex. He’s afraid his soul mate will leave him if he doesn’t get serious. He wonders if his routine his exasperating the problem. He wonders if returning to their past favourite places will rekindle the romance. He wonders if a marriage proposal is a solution.

Mary, Will’s grandmother, was very close to him as a child. She spent many a night with him, reading him bedtime stories (she prefers fairy tales) and praying that he grew up to be the best man he could be. As Will grows older, Mary worries about him fitting in. Him making choices that will make his life more difficult. Mary’s heart is huge, but sometimes her sentiment is misplaced.

Sarah starts out at university a shy girl, but within weeks she approaches the cute guy who lives across the street. Will. She’s infatuated. Their first date brings up all the true emotions of a first date: time going slow yet quickly, hearts speeding up as hands get closer together, each person slyly checking the other to see if it’s time to make a move. It’s excruciatingly haunting. Even while writing this, my own memories of first dates are flooding my mind. The anticipation was everything, and Fragments of Him builds anticipation extremely well. With Sarah you begin seeing key moments from multiple viewpoints.

Harry’s memories begin with a brief happy moment in late summer (yet with snow?), feeding the ducks with Will. He then reminisces about his boyfriend’s death and blurring out the memories of him, heavily grief-stricken and unsure of how to go on without Will. By this point my heart felt heavy. Knowing where Will had been and how he got here… it’s like I already knew Harry even though I had seen barely a silhouette to date. I could imagine the same grief being felt by everyone Will had touched. 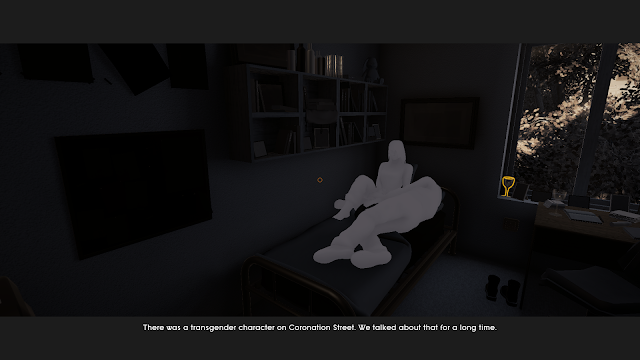 Fragments of Him looks very muted in general. Colours are neutral and muted (minus highlights), and if someone is irrelevant to what is going on their face is completely blank. It’s actually slightly terrifying, yet it also served as a reminder to me that I tend to go through life focusing on me and those directly around me while blurring out anyone else. I don’t pay attention at all to the outside world, I’m all in my head. My world resembles this one.

What little actual gameplay there is can be best described as first-person point-and-click. Highlighted items are able to be selected; this includes both objects and people depending on the scene. My favourite part of the gameplay is literally following a person down a path, with their thoughts at the time. After a complete thought is narrated, the person moves slightly ahead and can be selected for another complete thought, and so on. It allowed me to experience the game at the pace I chose to, taking long moments to process what I’ve heard before moving ahead. There are also times when this same type of leading happens with objects, going through rooms until the characters are featured in your field of vision. It really is quite ingenius.

There are also moments of choice, though few and far between. For example, when Sarah has a conversation with Will one night, I am given the option as to what she says. It is usually one statement leading to three options, but all will end the same way. These choices reflect real life, although in the end fate is what seems to cause major events to occur. 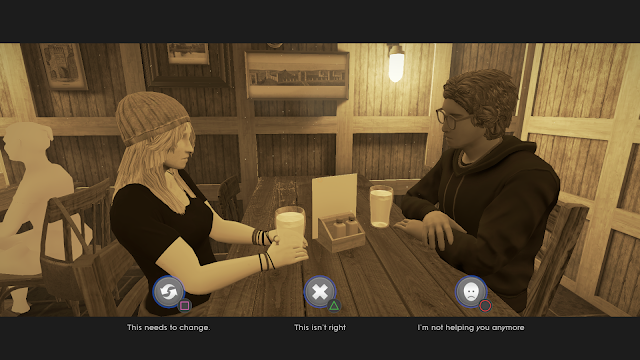 I recall seeing at least a handful of reviews at the time of the game’s PC/Xbox release (mid-2016) stating that it would be better as a film. I could not disagree more. The beauty of Fragments of Him is that is is structured as a film may be, narratively, but you get to take the time to explore the memories. Look at objects. Examine body language. We’re all so busy we want to plough through everything, even stories, as fast as possible. So of course, a film would make this story go faster. But faster shouldn’t be the point. Pausing to examine someone’s life from multiple angles, even if the person is fictional, isn’t something we ever get to do. We can learn from the pacing, the attention to detail, what we are lacking from our everyday lives.

Fragments of Him… prior to speaking of it, or writing of it, I need to take a deep breath and let it out slowly. The story is beautifully haunting, with flawed characters yet a deep undercurrent of pure, unadulterated love. It is about taking time for emotions to ebb and flow before moving from one scene to another. About understanding what motivates a person’s actions. About life and death and every incredible or miserable memorable moment. On a personal level, Fragments of Him has reminded me to be kind and empathetic, and love with my whole heart; my life has been made better through the experience.