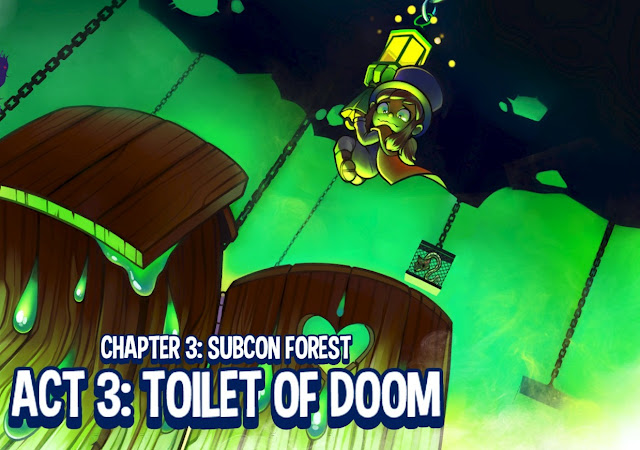 Let’s get a disclaimer out of the way: this review was written by someone who adored Super Mario Sunshine and Banjo-Kazooie. It’s also incredibly likely that A Hat in Time appears to have been conceived explicitly for the people sitting neatly in the nostalgia-heavy, old-timey intersection of the two fanbases. That’s a great thing for similar-minded folks, but the fear with a game that reminds me too much of what the titles I’d bang my head against as a child is that in coating itself with the trappings of yesteryear, it becomes nigh inaccessible to a modern audience. I’m pleased to report that my fears were unfounded; A Hat in Time brings the best of classic platforming and combines it with streamlined design sensibilities perfectly suited to the gaming attitudes of today.

You play as a young girl who inhabits a spaceship hub world complete with pillows, natural wonders of technology. Your job is to collect fragments of time that have fallen into various worlds, and to get out unscathed while doing good. The only real skill you have is the fact that you can knit practically anything into an item granting superpowers, and if that sounds a little offbeat, then you’re not alone in your observation. You don’t get a whole lot to go on when you first set into the world of A Hat in Time, but with all collect-a-thons, how much you learn about the world and how much you enjoy it really stem from your willingness to explore. Luckily, the game looks amazing.

The artistry of A Hat in Time is really what stands out the most when you load into the game. Each chapter and level has its own introductory art outlining the main characters and villains that you’ll encounter, which is a good way of giving the player a heads up about what to expect without the usual tutorial monologue that drones on about certain kinds of enemy weaknesses. The levels themselves are adorable, and range from confined environments to leisurely seaside landscapes, with high contrasts and bright colours making everything really pop. That being said, those beautiful levels do contain the occasional frustrated hangups with last-generation platformers which I doubt were left in intentionally; those camera angles are a challenge that almost all 3D platformer developers seem to really struggle with. Most of these were encountered when I clipped into tightropes, ladders, or other things that had to be grabbed onto and fell to my doom anyway. There were also the odd issue with depth of field and textures, which can make depth perception difficult for some challenges, and oddly, enemy hitboxes could be off at times too, and not quite the same size as the actual enemy. These will be nostalgic to people who encountered those issues back on the Nintendo 64 and Gamecube, but no one said that all nostalgia is inherently good. 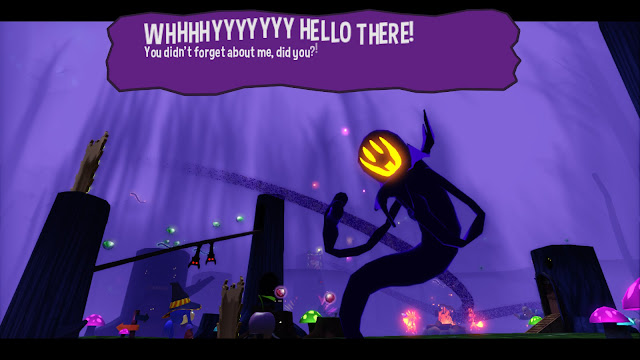 However, what kept me going despite those moments and the occasional crashes was the constant thirst for exploration which the game nurtured excellently; it all boils down to thematic variety. Simply put, there’s a theme to each world that you can access which influences the types of enemies, their abilities, and what they say, and there’s clearly been a lot of thought and effort into maintaining that cohesion in terms of design. This also extends to the music that permeates the title as well, which will likely be criminally underrated by many. One of the game’s Kickstarter goals was to get Grant Kirkhope to write a track or two, and while his hand wasn’t applied across the board, the rest of the Gears for Breakfast music team were no slouch when it came to building that same sort of character throughout the title. I never got sick of the music in the game, and there was a real range of tunes to relive and enjoy because of their tie-in with the themed levels. Yes, there were a lot of pop culture cliches, but A Hat in Time’s commitment to going whole hog with references and acts like building an entire world up as the lovechild of an Agatha Christie novel and a high-octane murder mystery really tipped the scales favourably.

That’s the sort of thematic pacing and presence that A Hat in Time really excels at. At its core is a hub world with a reasonably predictable storyline created as a vehicle for collecting things, which doesn’t normally strike a chord with someone as invested in narratives as myself. However, an easy and sensible fix for that was comedy, of which the title has plenty of. The writing had a bit of a wild bent, switching between relying on comedy cliches and stereotypes to some surprisingly dark humour for a game involving a literal child. Despite the inspirations for its various themed worlds being clear, the title avoided moving into slapstick territory and from mimicking its source material too closely, which only added to its strong world-building. While there was very little base narrative around the protagonist to build on, each level within a level had its own self-contained storylines and woes, and it wasn’t long before I realised that I was getting my plot fix from engaging with the adorable and zany characters’ trials and tribulations. I honestly can’t recall a game where solving a mystery and collecting clues had been worked so precisely into platforming without losing its momentum and meaning, and surprise mash-ups like that keep things ticking along.

Speaking of things ticking along, A Hat in Time is quick. Whether it’s the double jump mechanics and the mid-air dashes that allow for speed and mobility in the game’s platforming, or the fact that the levels themselves aren’t really that long, it crams a lot of value into the rather short run-time needed to crash through everything at least once. The title is acutely aware of its speed run potential, which was the fate of many an old platformer, and it even has a speed run mode which caters to those who gotta go (even) faster. For those of us who don’t partake in that kind of sport, there’s still plenty to appreciate from the shorter levels. 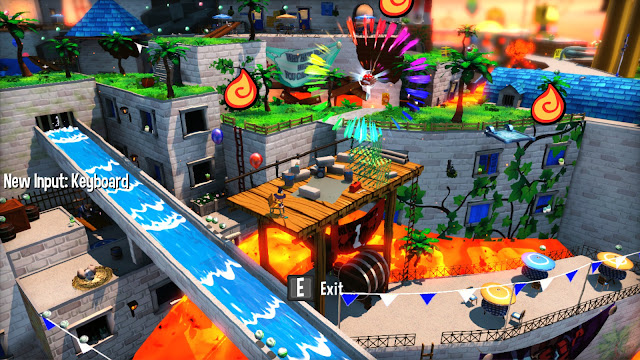 I could spend upwards of an hour messing around in a Super Mario Sunshine level as kid, partly due to my lack of hand-eye coordination but also because often you needed to spend a good amount of time in a level to get anywhere. A Hat in Time doesn’t need you to commit to it for hours on end, but perhaps because of that, you will. I didn’t feel a pressure to collect every single item in every level when I first breezed through them, but the gradual unlocking of abilities (which you get via crocheting new hats) and the cool themes kept me coming back to see what I’d missed. There isn’t a huge compulsion to find everything when you’re experiencing a level for the first time, and some levels were under five minutes, which makes it perfect for those with a busy lifestyle who want a bite of the platforming pie.

This is a game with undeniable soul and an incredible amount of shine considering its budget. There’s very little that A Hat in Time can’t do as a classic platformer, and it really throws itself into creating a cute and cohesive universe for you to explore. The replayability of the title is great, and you’ll get a lot of mileage revisiting older levels and finding hidden areas as you knit yourself a veritable treasure trove of superpowered hats over time. Sure, the developer’s nostalgia for the genre seems to have encouraged it to include the flaws of those golden years of 3D platformers, but I weathered those blips with a smile, and you probably will too.

Review: Fragments of Him (Sony PlayStation 4)