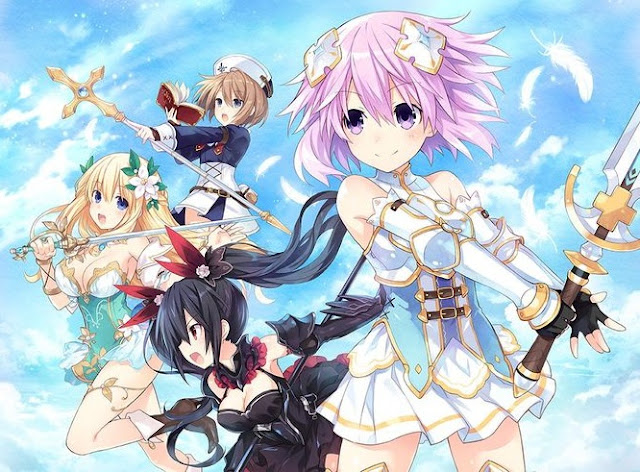 It was inevitable that the Hyperdimension Neptunia series would set its sights on the MMO at some stage. Each game in the series satirises and parodies one or another JRPG sub-genre; whether it’s the traditional turn-based genre, the tactics JRPG or action JRPGs, but until now Compile Heart and regular collaboration partner, Tamsoft, had left the might MMO alone.

Related reading: The “main” game in this series that is absolutely essential for fans of the JRPG genre is Megadimension Neptunia. Matt’s review.

Cyberdimension Neptunia isn’t just a parody of MMO tropes, though. It also sets in its crosshairs that increasingly popular sub-genre of anime in which heroes find themselves so immersed in a virtual world that they’re actually in that virtual world. The likes of Sword Art Online play to our increasing fascination with (and fear of) the idea that we can move ourselves into a virtual universe via some VR goggles or some other “immersion” technologies, and then never have to leave.

As fun as that concept is, there are some significant sociological discussions that we’ll need to have about it, as it will start to affect how we interact with one another and the physical world. Cyberdimension Neptunia is less interested in being part of that discussion than it is in highlighting the fundamentally absurd nature of these virtual environments. These are spaces where people can be largely uninhibited by the constraints of the real world, and if you thought Hyperdimension Neptunia games were already uninhibited you’re in for some eye-opening stuff with this one.

This game has a fun combat system #PS4share https://t.co/66HeuoSbsn pic.twitter.com/b7VJnRcn86

The basic premise of the game is that all the heroes from the main Hyperdimension Neptunia games are playing a new MMO, still in beta, together. The four main protagonists – Neptune, Blanc, Noire and Vert, are of course the leads here too, but they’re joined by all their respective little sister characters, and other series favourites show up, whether as shopkeepers (hi IF and Compa), or in otherwise bit roles.

The thing is that all the characters are completely aware that they’re playing a game, and this leads to Cyberdimension Neptunia’s greatest narrative trick; it might just be the first game that manages to regularly break a fourth wall within its own narrative while also breaking the fourth wall with the audience. There are layers of fourth wall breaking nonsense in this game, and it’s incredible. The characters constantly chatter “out of character” while in the world, talking about how they’re sitting next to one another in the “real world,” or talk with NPC characters, fully aware that they are NPC characters. On top of that, they break the fourth wall with the players themselves regularly, speaking directly to us as well.

In addition to being incredibly funny, if occasionally bewildering to witness, the effect that having a tower of “fourth walls” regularly come crashing down is that Cyberdimension Neptunia manages to explore some fundamental weaknesses in the MMO format. That idea that there’s no continuity to characters because players fill chat boxes with “AFK” and “getting chicken” is a fundamental flaw of the MMO genre, with immersion within the actual fantasy being presented within the world being constantly broken because there’s no consistency with how players interact with it. Final Fantasy XIV, as much as I love it, annoys me at times because I’m forced to skip cutscenes to keep up with allies in dungeons, or deal with endless spam, abusive behaviour, or out of character comments in the comments boxes. It’s nowhere near as immersive as the single player Final Fantasy games. Cyberdimension Neptunia likewise doesn’t feel like a particularly immersive world, because of the way the characters carry on, and that liberates it to be an endless stream of jokes, puns, humour, and any other synonym you could think of for “a darned funny time.” 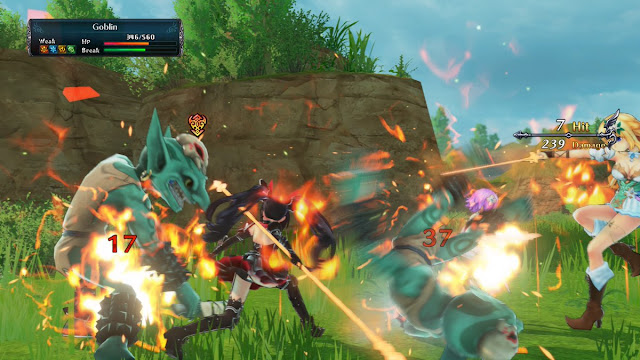 And it really is a very funny game, if you can leave certain inhibitions at the door. Compile Heart and their development allies Tamsoft are not particularly known for restraint when it comes to fanservice and conversations about boobs, but with Cyberdimension Neptunia, liberated of the need to have a plot beyond “these girls are playing a game in a virtual world together,” the developers clearly saw it as an opportunity to up the ante in that particular regard. I can’t remember a conversation in this game that didn’t involve Blanc’s flat chest or Vert’s oversized one. When it wasn’t about chests, conversations instead turn to leotards and underwear, for example as a camera angle in a cut scene just happens to dip low, again with fourth wall breaking commentary about low camera angles from the characters.

Outside of the cut scenes, in combat and simply moving around the world skirts have lives of their own and every character has their own particular taste in underwear. Unlike Tamsoft’s other Hyperdimension Neptunia games, you can’t actually pause the action at will to enter a screenshot mode to take of those physics-free skirts, which was done deliberately to maintain the illusion of an MMO, where you can never actually pause the action. But it’s definitely a fanservice-heavy game, and while some (if not many) will tire of that humour, I found it amusing throughout. Particularly since the game seems to be doing all of this to make a metatextual point to how little real substance there is in the narrative of your typical MMO, and how little relevance whatever story there is has to what you end up doing in the world. It’s unusual for a game to be openly critical of the genre that it’s performing within, but that’s the wackiness of the Hyperdimension series to a T.

The other great joke about the game is that while it looks and feels like it wants to be an MMO, and the characters explicitly refer to the game that they’re “playing” and inhibiting as an MMO, for the person sitting in the real world with a controller in their hands is not playing an MMO. This is a single player game with a couple of multiplayer missions that you can drop into if you’re in the mood, but there’s no persistent world, as you expect from an MMO, and rather than the world being broken down into large areas that are connected seamlessly to one another, in Cyberdimension Neptunia the world is broken down exactly like it would in any other Hyperdimension Neptunia game. Levels are bigger, yes, but nothing about them suggests “MMO.” 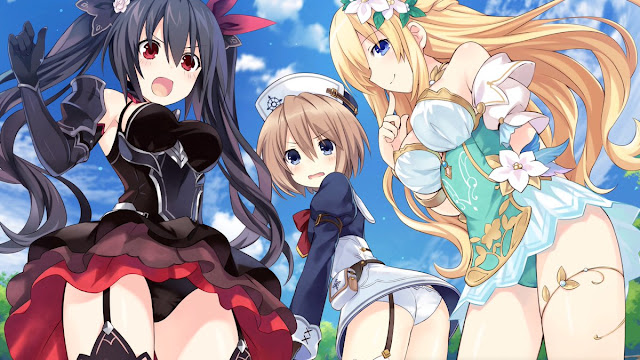 Combat, meanwhile, is yet another layer of parody. It’s a basic MMO-style combat system, and indeed with the PlayStation 4 controller feels vaguely reminiscent of playing Final Fantasy XIV on the console. But there isn’t the complex interplay of skills, and while each character on the battlefield has a specific role, the traditional reliance of MMOs in having a tank role, a healer role, and a DPS (damage per second) role is nowhere near as prominent. MMOs do that to enhance the complexity of the game and force teamwork, but in a single player game like Cyberdimension Neptunia, that experience is near impossible to emulate, particularly when the AI-controlled allies are not particularly smart.

So as a result the game feels very button-mashy and quite shallow. But, again, that’s part of this game’s charm and humour. I greatly enjoyed the action, simple as it is, because it’s clean for the most part and very, very dynamic. With regular enemies the moment the first blow is landed there’s a whirlwind of activity that’s difficult to keep up with as all the allies and enemies have at one another, and the screen is inundated with numbers. I found myself watching the character health information on the sidebar to know when to pull out some healing spells or the like, and that certainly emulates the MMO experience, where you’ll almost spend more time watching health bars move up and down than you will the on-screen action. Boss battles, meanwhile, are prolonged and even physically draining exercises, but again, are clean and even elegant in design. It’s a combat system that won’t win awards for being memorable or particularly “good,” but as a tune-out kind of experience, it does a great job of remaining true to its inspiration while having a less-than-subtle dig at it in the process. The hallmark of the entire franchise.

I suspect I know where most people will sit with Cyberdimension Neptunia. They’ll go in expecting a straight-faced single player MMO, a little like the Sword Art games, and come away a little confused about what, exactly, this game is trying to achieve. Because it’s not trying to be a “JRPG” in that traditional sense – let alone one you play seriously. It is extraordinarily fanservicey, even by the standards of the series, and a lot of the storytelling and gameplay can be easily interpreted as “bad.” But I’m inclined to think otherwise. At its core, I feel like Cyberdimension Neptunia is quite genuine in its efforts to be an out-and-out parody, with no real interest in emulating what people do play MMOs for. And if you consider what tends to put people off MMOs, or at least irritates them as they play them, this game does a remarkable job at both highlighting these genre flaws, and spinning them from being something irritating into nonsense humour. 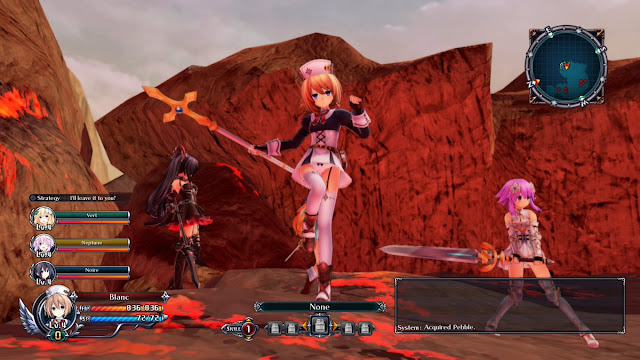 Related reading: For a more “serious” single player MMO, consider one of the Sword Art Online series. Here’s Nick’s review of one.

So it’s deliberately bad, then. And as a bit of irony, it’s so utterly delightful for that. I’d never recommend that someone looking for a genuine MMO or MMO-like experience actually play this – you’ve got Final Fantasy XIV for that – but for silly, ridiculous, self-deprecating humour, backed by gorgeous character and environment art, and a fast, fluid, and genuinely entertaining combat system, I’ve had such a good time with Cyberdimension Neptunia that I can’t help but love it.