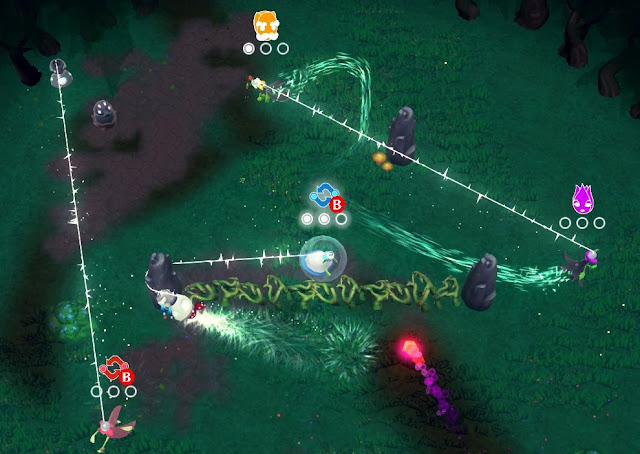 There’s a classic scene in lots of action-comedy movies where two buddies stretch a long piece of rope between them and run forward to knock down a huge crowd of bumbling enemies. BrambleLash is that scene, except in game form, and with all the hilarity intact. Not only do players need to team up to defeat enemies, they can also betray each other with a well-timed yanking of the chain, sending the unsuspecting partner into an untimely end and scattering their gems for the traitor to steal. It’s a game which is unbelievably funny to watch unfold, and it achieves this through solid mechanics, smooth animations and fast paced gameplay.

We had a chat with Perth-based developer, Liam Hunt, this week in the leadup to the release on PC.

Harvard L: What are you working on at the moment, and how’s it going?
Liam H: We’re literally just on the cusp of releasing BrambleLash on Steam as I speak! Unfortunately the whole release process involves a lot of non-development related organisational work that I don’t think any developer really relishes. However, it’s incredibly exciting to be getting the final version of our first title into people’s hands. BrambleLash is the sort of game that’s made to get players talking (yelling?) and reacting to each other, so it’s a real treat for us to watch others play. Overall I feels as if everything is going well, with just a hint of nervousness and absolute terror as comes with any multi-year project release.

To make matters harder for ourselves, we’re also preparing to fly to Japan and exhibit at the Tokyo Game Show this week. Getting selected for the indie area a couple months ago came as a very welcome surprise and has been a highly effective motivator in getting BrambleLash completed. I honestly feel a lot less prepared than when we’ve demoed at other conventions in the past – release has occupied almost my entire headspace until just recently. That said, I’m super excited and don’t think we could have picked a better way to celebrate!

Harvard L: What do you think about the state of the Australian game development industry at the moment?
Liam H: Our lack of federal government funding for games is painful and really puts us at a disadvantage when competing in a global market. I’d love it if our government put a greater amount of tangible effort, time and money into supporting both creative and innovative industries, rather than simply paying the idea lip service.

Even with those complaints however, I think our games industry is in a very promising position at the moment. Every year there seems to be more and more success stories and people attending industry events. 2017 in particular has been an awesome year for game development here in Perth, seeing some big releases such as Paradigm, Battlestar Galactica Deadlock and Symphony of the Machine. It’s both amusing and sad when people I talk to are so often surprised to learn that a highly successful game they love was made in their very own backyard. More people are making games and forming indie studios than I’ve personally seen before, we just need the support and funding to ensure that they survive long enough to be successful.

Harvard L. What recent game would you recommend to people at the moment, and why?
Liam H: Hah, I honestly haven’t had too much time to properly play any recent releases. My schedule has basically been work day job, work on BrambleLash, repeat. The one game that I have been able to catch a few minutes here and there of is Faeria: a digital card game in a similar vein to Hearthstone or Elder Scrolls Legends, but adds a hex board where you create land and summon creatures. The land placing element introduces a new strategic layer that I find really compelling and similar to some more traditional analogue games like Go. I also love the painterly 2D art style and whimsical aesthetic to the whole game, which offsets some of the stress of trying to out predict your opponent multiple turns deep. Honestly, I’d recommend taking a look at Faeria to any time poor board or card game enthusiast looking for a different digital take on the genre. It’s free to play and I haven’t felt pressured to spend a single cent yet (my apologies to the developers!).

Harvard L: What’s something you love about the general games industry at the moment, and what’s something you wish would change?
Liam H: This might not be everyone’s experience, but the one thing that I’ve consistently loved since first getting into the games industry is the people. Every local game dev community event I’ve been to here in Perth has been nothing but welcoming. I’m constantly amazed at everyone’s drive to collaborate and lend each other a hand. When attending Melbourne International Games Week (GCAP and PAX Australia) over east I’ve always been made to feel welcome – I love that it’s so easy to walk up to and make friends with bunch of total strangers in another state. I especially love the focus on diversity and inclusivity that I’ve seen at a grassroots level here in the Australian games industry. From a purely pragmatic viewpoint alone it means that a greater amount of experiences, viewpoints and personalities can be freely wielded to create more varied and surprising games.

Something I wish would change is the practice of companies requiring crushing periods of crunch time to finish a game. I’ve been guilty of inflicting this upon myself, and in my experience excessive crunch time really just means that the project has been managed poorly. The perception that game developers should feel privileged to work in the industry and thus sacrifice large parts of their life for it is poisonous. It ultimately turns talented people away into other industries that will pay them more to do less, which hurts us all.

Harvard L: Hatsune Miku; yes/no?
Liam H: Yes! When the day comes that we are ruled over by robots, let it be know that I for one welcomed our vocaloid overlords.