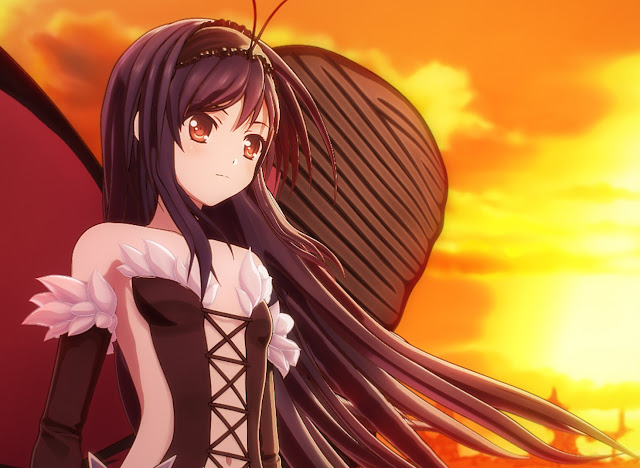 Sword Art Online is somewhat of a household name around these parts, and by “these parts” I mean large swathes of the gaming community. Anime series like Sword Art Online now are a dime a dozen, and takes on the genre of being forced into a game’s universe have become more sophisticated and nuanced with each new take. This often leaves Sword Art Online (while hardly itself the originator with the likes of .hack around) in a rather indifferent spot in the current market; as compelling as its original arc might have been, the creative license taken so far has spawned a number of impenetrable alternate universes that only true die-hard fans have really loved. It is at that intersection that you’ll find Accel World Vs Sword Art Online: Millennium Twilight. It is a game for hardcore fans of both those franchises, and if you fall into neither category, then the flaws of the title become much harder to ignore.

Related reading: For a second take on the game, here’s Clark’s take on the PlayStation 4 version.

Accel World, the other major part of this game’s title, is likely the outlier in terms of fanbases. It’s worth noting that both franchises spring from the font of the same mind – Rei Kawahara. For the uninitiated, it functions similarly to the systems set up in Sword Art Online – everyone has a wearable computer that they use to engage in virtual fights that take place in the world around them. However, getting good at the game in Accel World means rewards that improve your ability to succeed in the real world, making the stakes more compelling than your usual VR escapism anime. Users take the form of giant robot avatars to duke it out, and it is those giant robots who find themselves dumped rather unceremoniously into the midst of Alfheim Online.

The similarities between Accel World and Sword Art Online are a breeding ground for solid crossover material – you don’t have to look much further past the use of VR gaming in both to already see that there’s enough for a standalone RPG. Therefore, it makes sense that the things you encounter within the first twenty minutes of Accel World Vs Sword Art Online read a bit like a laundry list of things that fans of the franchises either want or are already familiar with thanks to any existing games. Kirito and Asuna? Check. Flight capabilities and aerial combat? Check. Bloody giant robots that can shoot laser beams and teleport? Check. All those things pop their head up before you can so much as blink, and while it may seem initially like an overwhelming deluge of material, I came to appreciate the frontloading of story and content as the game wore on and it became more about grinding. 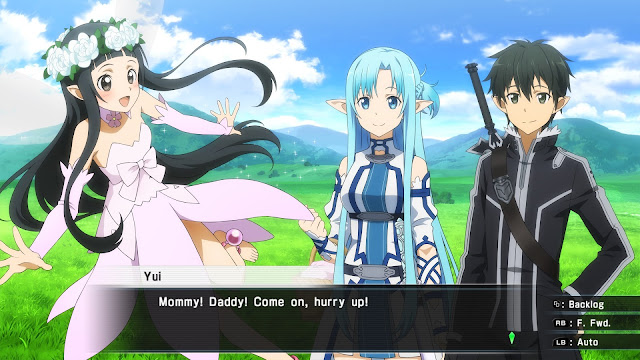 Because of Accel World Vs Sword Art Online’s status as an obligatory crossover game for the fans, I’ve cut it some slack in terms of what it’s expected to deliver from a narrative standpoint. Crossover games are known for being often being inane romps through the best parts of their titles without much of a care in the world, and it’s nice to see that this title has broken the mould a bit by ensuring that the narrative thread doesn’t get too tangled or inexplicable. One doesn’t have to suspend any belief to understand the central conflicts and the crux of why the two worlds are joined together, and that makes it much easier to enjoy. Add a mysterious villain to the mix and you’ve got all the trappings of a simple, coherent story, which is the perfect vehicle to convey the main focus of the game – the characters and the combat.

The characters are predictably fan favourites. You’ve got Kirito and Asuna, Black Lotus and Silver Crow from Accel World, and a host of other familiar NPCs with which to make use of and interact with. As befitting the different franchises, the playable characters from Sword Art Online and Accel World utilise completely unique combat and travel mechanics. One such mechanic is flight, which the Alfheim avatars have turned into something close to an art form. The maps are considerably vast for a single player RPG, which is likely a hangover from the studio trying to imitate the MMORPG feel of Sword Art Online, and traveling all of that distance on foot can be pretty off-putting after the initial novelty of playing as Kirito and Asuna has worn off. All the fairy characters can take to the skies at their leisure, and there’s just something about soaring through an endless blue sky that makes the downtime between questing and adventuring easier to bear.

However, all that empty map space never stops feeling, well, empty, and when your party members are left to their own devices, they will very easily engage with enemies that you’d otherwise prefer to ignore, and it can often feel a bit like herding cats. Accel World Vs Sword Art Online hasn’t quite managed to replicate the MMORPG experience that it’s based on by virtue of the game being single-player, and the moments where your companions are half a map away attacking something while you’re flying over yet another barren hill are immersion-breaking and annoying in their frequency. There’s not quite enough populated in the game world to make up for its scale, and flying will feel like less of a perk and more like a necessity of design. 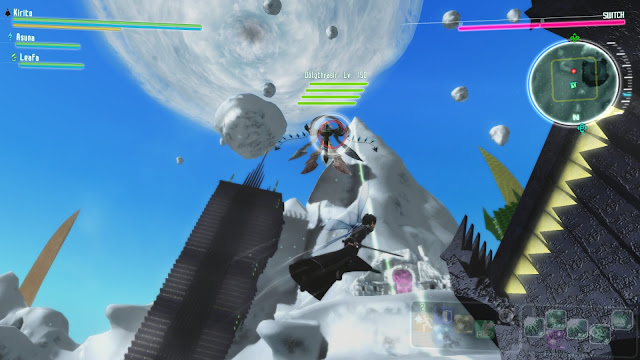 It’s lucky then, as with everything in Accel World Vs Sword Art Online, that your flight can be weaponised to add an extra dimension to it. There’s bouts of aerial combat, which you will recognise if you’ve played Sword Art Online: Lost Song, and that’s its own bit of fun which you’ll have to master if you want to pull off some visually-striking combos. Accel World’s lot don’t all have the ability to take to the air, however, but that’s made up for by their incredible ability to target enemies and teleport into position to annihilate them. Building a mixed party from both rosters makes for the most engaging experience overall, and having the ability to switch between playable characters means that you can make the most of that roster and the different skills available to each member. The enemies don’t put up too much of a fight once you’ve gotten the hang of pulling off your skills, which leaves you a little more room to experiment with your combat arsenal without worrying too much about what hits the hardest.

As a PC port of a console game, it’s probably reasonably important to touch on how it handles with its default keyboard and mouse controls. The answer to that is predictable – not all that great. It was much easier to play Accel World Vs Sword Art Online with an XBox controller, if only because of the keyboard and mouse’s unwieldy mapping of camera controls and attack buttons. If you’re a major fan of both franchises then you’re probably going to be willing to put up with the inconveniences of using a mouse and a keyboard if you absolutely have to, but when almost everyone has a controller handy anyway, there’s no need to punish yourself by being a purist. Movement and combat feels much more intuitive when you’re using console controls, and the heat of battle is really where this title shines the most – there’s nothing quite as visually spectacular as your party members at peak power thrashing a boss.

Accel World Vs Sword Art Online is unapologetic in its nature as a crossover game, and I can respect that. However, as someone who only really enjoyed one of the franchises, it was a hard sell. The dated graphics in an era of games packed to the gills with NVIDIA HairWorks were noticeable as well, but hardly a deal-breaker if the core concept of adventuring with your favourite characters holds appeal for you. All in all, it is a solid PC port that does what it says on the tin without being completely alienating to those who don’t know either franchise; jumping in as a newbie might be a little overwhelming but it’s definitely not impossible thanks to the straightforward story delivery and mechanics. This is definitely one that fans will love, but if your enthusiasm for Kawahara’s work is lukewarm at best, then you may well want to look elsewhere.