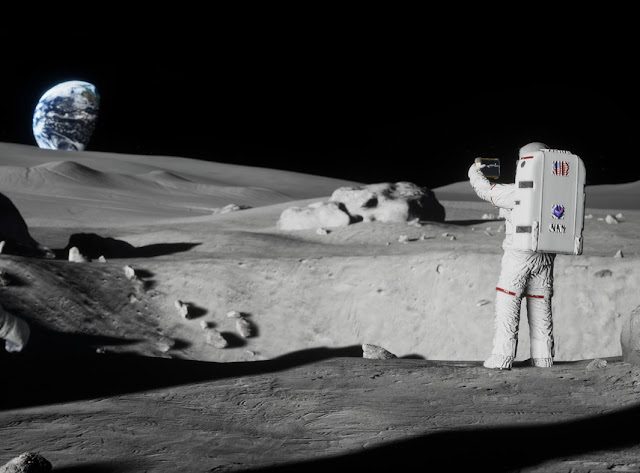 Opaque Space, an Australian developer based in Melbourne, had some big news to share this week; it was formally part of the Australian Space Program (also announced this week), and would be working with Boeing Australia in providing simulators to help with the training of those that would be working in space.

It’s great news for the developer itself, and the broader Australian games industry. “Serious games” – or games used for educational, news, or training purposes, offer a great deal to game developers by providing them with further commercial opportunities that can lead to hires and more talent being brought into industry. That in turn can also benefit the commercial games for entertainment sector. For an industry that struggles to get the attention of politics, as Australia’s games industry does, being associated with these kinds of projects can also boost the industry’s chances of forming a dialogue with politicians.

I had a chat with one of the team leads at Opaque Space, Jennifer Scheurle, about the project, serious games, and some of the team’s future goals.

Matt S: Firstly, could you give me an overview on what’s different about a serious game as opposed to one that’s made for entertainment?
Jennifer S: Well, I’m sure definitions vary depending on who you ask, but we personally think the two are not as different as people make them to be. Both serious games and games for entertainment use the same principles of game design, their end goal is all that might differ from one another. Generally, serious games have more of an educational purpose which can be a specific learning outcome or communicating educational concepts and knowledge. Games for education tend to be more free in their approach of mechanics and storytelling as they don’t necessarily have to fulfill a specific learning outcome. The overlap however is significant in what we do: while our work aims to be authentic to the work of NASA and our other partners, we also believe that entertainment should be part of those experiences and in fact, ultimately even make them better.

Matt S: How does the goal of building a serious game affect how you approach its development?
Jennifer S: Our processes don’t really differ much from what a regular game development cycle would look like. Some of our work, while being educational and authentic to NASA is also still consumer-facing and to us these are not mutually exclusive. The only thing I need to consider when designing for our titles in collaboration with NASA and when working with Boeing is the significant amount of research going into what we do to ensure we understand what we want to represent and how. Of course, on top of that, we need to put extra care and effort into the goals and learning outcomes, but frankly, every game I design has a set of goals I want to meet and what kind of goals those are do not matter all that much for the development process. It still needs to be handled with the same care and processes, be tested accordingly and ensure that those goals are met adequately. 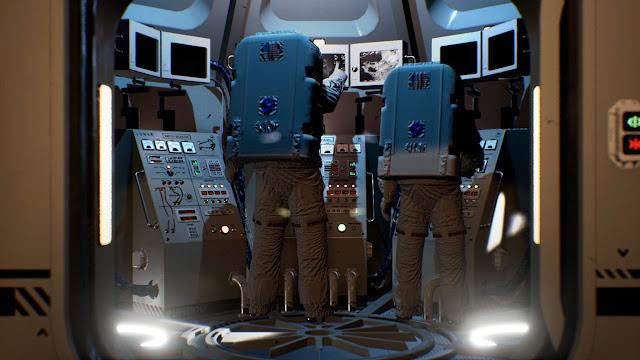 I think I wish people would realise how serious games are very similar to games for entertainment – we go through the same motions, have to do quality assurance and eventually test with the final user.

Matt S: Could you give me an idea on what the specific goals of this project and future projects are?
Jennifer S: Of course we can’t talk about specifics at this stage, but essentially we have partnered up with Boeing to develop their work so far on Starliner VR training further and push the boundaries of what is possible with that. We are very honoured to be chosen to contribute to this program as not only the Starliner program itself is a milestone for human space flight, but also because the work that Boeing and their team of experts and internal game developers have done on the training program so far has been exceptional.

The Starliner program is a far-reaching space shuttle program that is designed to bring cargo and eventually passengers to the International Space Station. Pilots as well as crew members will undergo training in VR and beyond to be able to go on these missions. Boeing has also announced commercial seats on the Starliner program just recently at IAC. It is a great privilege to be seen as competent in our field and beyond for it.

Matt S: Just how effective is VR as a simulation tool when it comes to serious games? Where are there issues with the technology still to be addressed?
Jennifer S: We think VR is an exceptional tool for training in many areas, mainly because it allows for going beyond what is possible in a real life training situation. Of course, part of our work is accuracy and authenticity, but we know that we can go beyond that. If, for example, we train people to handle large machinery or vehicles such as a space shuttle, we can not only put people into an accurate representation of the cockpit, we can even allow them to have external viewpoints to handle the vehicle and gain a greater understanding of how it moves and its dimensions. We can prototype potential solutions in VR for those scenarios that would cost companies greatly if they were to build or replicate them fully in reality. Our only restrictions are with the technology: the lack of better tracking, accurate five-finger tracking functionalities and wireless headsets for example. But none of these things really stop us from working the way we work at this stage. If anything it means that we will only get better at what we do in the future when we see the technology evolve.

Matt S: Is there potential for a simulation such as yours in a consumer market, and what would need to be adapted or changed to make it work?
Jennifer S: Absolutely. In fact, that is part of what we do as well. We are an enterprise company that also has a branch for entertainment which covers games in a more traditional sense. Everything that changes is only in structure and the way the game progression is laid out. Consumers likely learn differently and with a different goal and purpose compared to people who use it to train specific skills. Some mechanics will need to be introduced slower given that the people we will train for the Starliner program for Boeing will have had exposure to previous training and knowledge that consumers likely have no exposure to. 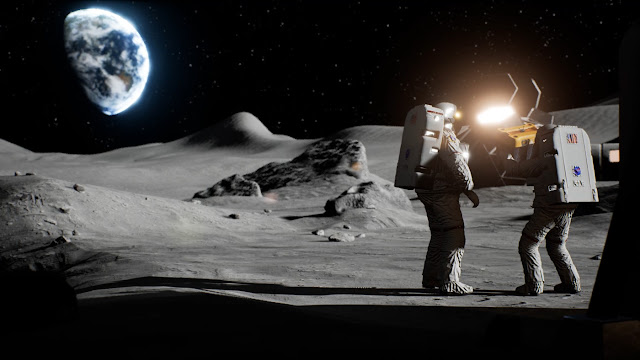 Matt S: A lot’s been written about the health of the Australian games industry. Do you feel that avenues like this are where our industry can find its niche?
Jennifer S: I don’t think niche would be the right word for this, honestly. I believe we have contributed greatly with this partnership to widening what game developers can do and help explore how our skills can be used in many other contexts. I don’t even think we have to abandon or change the way we operate much, I truly believe that our skillsets only need to be recognised by other industries as valuable. And a partnership with a game development studio such as ours with Boeing and astronaut training subsequently is a great step to show that we are capable of it – not only to enterprise, but also to the government, which is long overdue with more support for our work.

Matt S: A pity we missed you at TGS! What was the response like to your demonstrations there?
Jennifer S: It sure was quite an event! We showed our latest project in partnership with Noitom International: Earthlight Lunar Mission. Noitom provides a roomscale, free-roam VR kit that has 6-player multiplayer capabilities as well as mixed reality object tracking. We presented Lunar Mission as a five minute demo to business and public in Tokyo and the response was phenomenal. Over 400 people ran through the demo with up to three players at once, going on a virtual moon landing in 2030. I think what is most outstanding for this setup is how high quality the demo was and how free-roam VR introduces many new feelings to the players. People would step over ledges that only existed in virtual reality, reported feelings of “loss of gravity” and other phenomena which we think are only possible if you put people fully within an exciting environment like this.

The full game will be available at some point in early 2018 at all sites that offer the Noitom free-roam kit.

Matt S: What kind of opportunities are there to expand on this game – or develop other serious games – down the track?
Jennifer S: Our partnership with Noitom is long-term and ongoing. We develop ongoing new experiences for the kit, all of them to do with space. However, we definitely see free-roam collaborative kits like this one in our work with space agencies as well and not only in serious games or VR arcade halls.

Matt S: Which industries, beyond aerospace, do you think stand to benefit the most from VR simulation and serious games?
Jennifer S: I think the possibilities in this space are as endless as games are. We have only begun to explore these avenues and the more the technology develops, the more possibilities we will be able to explore. Essentially, all we are currently lacking is for enterprises to get on board with our work as well as have a more stable consumer market to spread the general technology and understanding of VR and AR technologies. 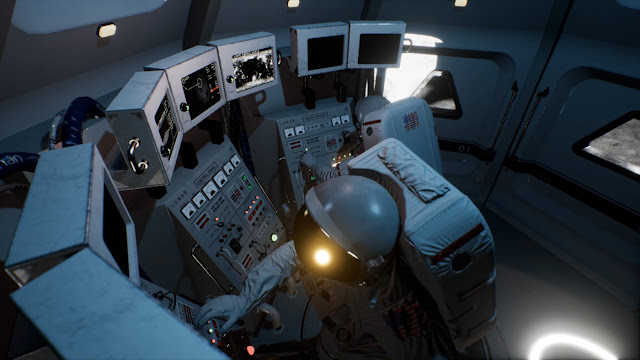 Matt S: Finally, when you’re not developing serious games, what other games are you playing at the moment?
Jennifer S: Honestly, I haven’t gotten around to play a lot of games with the work we have going on, so I reverted to mobile games, mostly, because I can play them on the go. However, the last game I played was “What Remains of Edith Finch” on our flight to Tokyo – which was one of the most clever and excellent narrative games I have played in a long time. Very worth your time.