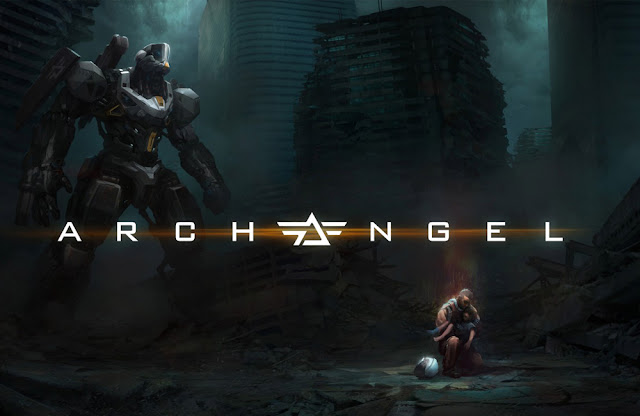 Archangel is a game about piloting a giant mech across a war-torn America, but its opening is far from the kind of bombastic set piece you’d expect from such a game. After picking your character – either Gabe or Gabby Walker, depending on gender preference, though codenamed “Guardian” either way – you find yourself inside a military transport vehicle that’s empty aside from you and your son, Paul. You might associate a troop transport’s procession with with the nervous air of soldiers being shipped off to war, but this is different. Paul’s excitement overflows as he animatedly plays a handheld game console and looks out of the window expectantly.

The reason for his excitement is understandable: he’s been invited to watch the first test run of a new prototype weapon, a six-storey tall mech. What kid wouldn’t be excited about getting to witness something like that? Such are the perks of being the son of a captain of the United States Free Forces (USFF). It’s a low-key, deeply human sequence – you quietly watching your son, playing a little hologram-driven game he made for you, and talking with him about what’s to come. In a game billed as an “intense, cinematic VR arcade shooter”, I never expected something so endearing right off the bat.

It works wonders. Coupled with some very strong voice performances and the most lifelike character models I’ve seen in a VR game, the opening puts the emotive, human side of the story front and centre from the moment the curtains open. There’s nothing particularly innovative about it, but it’s executed to perfection. That sets the tone for the whole game, because Archangel doesn’t really do anything you haven’t seen before, but it does it so well that it’s hard to fault. 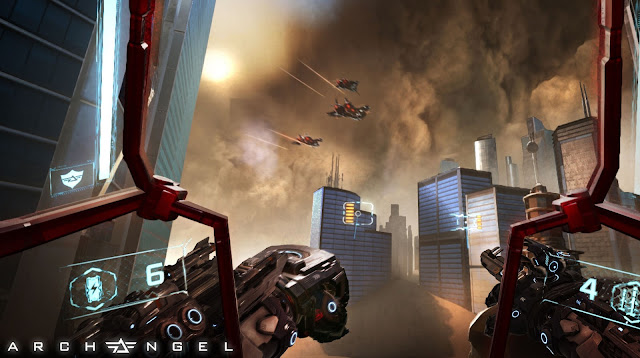 After that introduction and a smooth first test, the proverbial droppings hit the fan when the facility is attacked. The assailants: HUMNX (pronounced “humanics”), a tyrannical corporation that rules a post-apocalyptic United States, and with which the USFF is at war. With the test centre brought to rubble and few making it out alive, the mech’s first test quickly turns into a live mission as you fight your way across the American wasteland in search of safety and revenge.

From here on out, Archangel becomes a very familiar sci-fi military adventure about an underdog resistance fighting against a violent corporate empire. But like that introduction, the quality and polish of what’s here more than makes up for any lack in innovation, delivering a game that’s exciting, intense, poignant, and thought-provoking.

It’s a war story in a very traditional sense, but it takes care to avoid the imperialist ideology that so often accompanies such games. Crucially, there are no generic Middle Eastern / Russian / Korean / [insert America’s latest chosen nemesis nationality] enemies to fight, nor strange, evil aliens to act as their stand-in (metaphorically representing those aforementioned latest choses nemesis nationalities). Instead, Archangel takes place within a civil war where the villain is an American corporation with a dictatorial streak. As you traverse the country, you’ll pass (and fight to defend) American civilians who are refugees in their own country, not because of an invasion of Muslims or immigrants, but because of unchecked corporate greed. In a time when the biggest threat to to the United States is its own growing nationalistic fervour, this is a powerful statement to make. 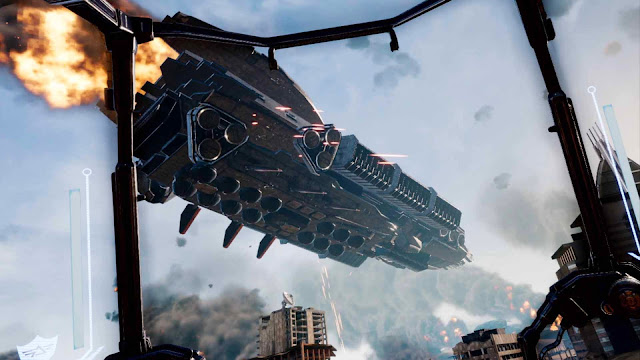 Archangel also dodges the common tired military tropes in how it characterises Guardian and their allies. They largely fall into the usual archetypes – the no-nonsense general, the gung-ho gunman, the quiet, stoic one – but even within the space of a relatively short story, they manage to subvert the expectations around these. Bulldog, for example, is seemingly the most bro-ey of bros, but he also frequently checks in on Guardian to see how they’re doing, and to respectfully question decisions that he feels are wrong.

Guardian has, perhaps, the most interesting story arc, and is so much more than just an avatar for the player to occupy. Theirs is, in a lot of ways, a classic revenge and redemption story. The stakes in the war against HUMNX are personal, and only made more so by the attack at the start of the game, but the quest for revenge doesn’t necessarily align with Guardian’s duties to their squad, to the USFF, and to the resistance movement in general. This isn’t a game of moral choices (though there is one such moment towards the end), but a dive into the conflicted mind of a military captain who’s lost a lot. Between Guardian, the members of their squad who serve as foils to different aspects of their character, and an endearing AI companion with whom they share a consciousness when connected, Archangel offers up a lot of different perspective on this timeless, tragic story.

This all plays out through a fairly straightforward rail shooter setup. Your mech moves automatically, you simply have to aim, shoot, and punch your way through the enemies you come across. You’ve got four different weapons in your arsenal, all of which serve a purpose, so knowing when to switch between them is key. Even more important is using the energy shields attached to your mech’s arms – they don’t give full body coverage, so you have be aware of enemy position and physically move your arms to block incoming shots. They also run out of energy very quickly (but recharge quickly as well), so you can’t just turtle your way through; you have to be smart about how you use them. Don’t think you can just ignore the shields and blast your way through, either – even on easy difficulty, you will die very quickly if you don’t at least get reasonably au fait with blocking.

There’s nothing remarkable about this, but like the rest of Archangel, it all comes together nicely. Enemies and locations are varied enough to keep things from getting stale, a selection of upgrades add a sense of progression and customisation, and though this isn’t a game that could work just as well without VR, it’s implemented well. Really, the gameplay is there to service the story, which is where Archangel shines brightest, and I’m just fine with that.