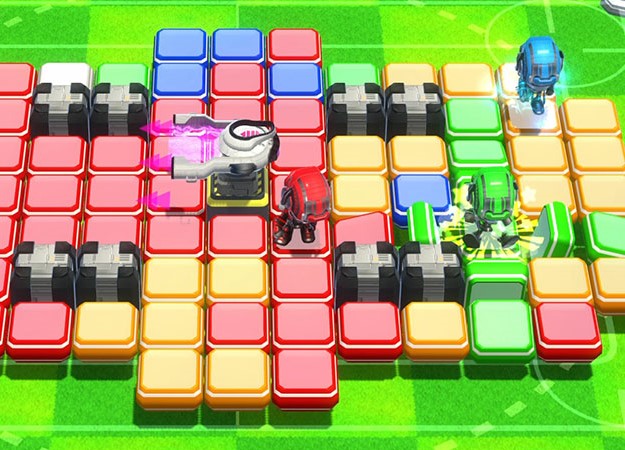 As a rule of thumb we aim to write reviews of at least 1000 words at DDNet. We do that because we like to explore the various themes that games put forward at depth, and all games, regardless of design, are the product of a lot of work. A thorough review is the least we can do out of respect for those that created the game.

Related reading: If this game looks good to you, Super Bomberman R is so much the better choice. Jim’s review.

I’m going to really struggle to hit 1000 words with Flip Wars. There just isn’t that much to the game. And, on top of that, I just don’t want to. Intriguing concept aside the game’s a bomb.

Flip Wars is a vague riff on the classic Bomberman arena battle. In Bomberman, the goal was to use the bombs that you had access to to control territory within the arena, and from there start to position bombs around the place to “catch” opponents and eliminate them from the game. It looks like utter chaos to watch, but players that are good at Bomberman are very methodical and know that the real secret to success in the game is playing the territory control game well. 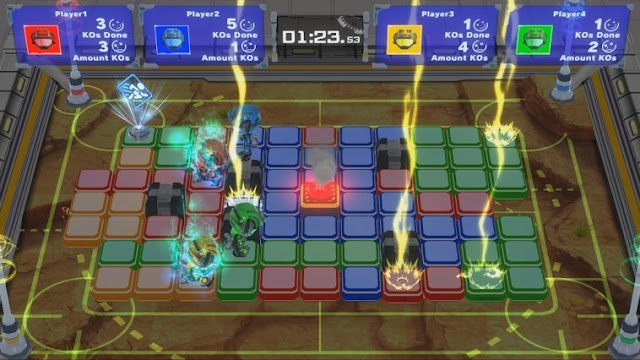 Flip Wars is less subtle – and yes, it’s quite impressive to make Bomberman look subtle. In Flip Wars you’re explicitly capturing territory within an arena. The arena itself starts off by being constructed of plain, white tiles, but by butt-stomping a tile, you can “flip” it to your colour. Additionally, the force of your backside crashing into the tile will flip a number of other tiles nearby too. Every so often powerups appear, which can include the range of affect for your butt-stomps, the speed at which you move, and so on. If you catch an enemy in the radius of one of your butt-stomps, they’re knocked out of commission for a while. A couple of minutes later, a timer runs out, and the person that has captured the most territory is the winner. That’s it – that’s the entire game.

It has all the potential in the world to be a simple, clean, and entertaining multiplayer game, but one gameplay mechanic just about ruins everything; unless you’re standing on tiles coloured your way, your movement speed slows down to a completely useless crawl. This cripples any room for strategy that the game might have had; each and every game quickly degenerates into a mess of players butt-stomping as soon as they come to a tile that isn’t their own, and then hoping that the item drops fall their way so they can have an advantage over their opponents.

I can see where there developers were going with this penalty for being off your own “territory;” Splatoon has the same approach, and it offers a brilliant game of territory control. But then Splatoon is a team-based game with a complex meta-game involving weapons and team builds. In Flip Wars you’re all by yourself in every single game mode, and while there’s a couple of variations from the standard “tile capture within a time limit” mode, these, which include things like a “last person standing” mode where each player has a limited number of lives, don’t add any actual strategy into the mix. 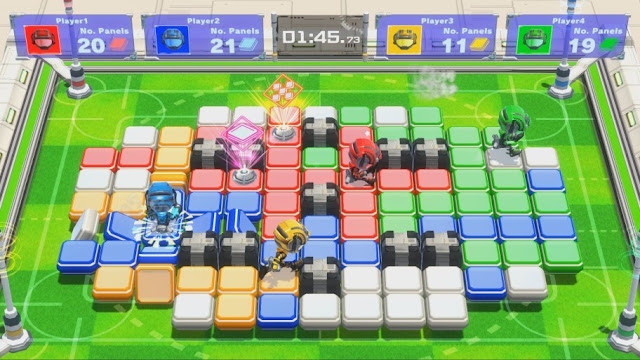 The one saving grace is the arenas themselves, with a couple having special conditions such as a gun or “bomb” that can colour an entire row of tiles your colour, simply by butt-stomping near it. These arena features don’t add much to the strategy of the game, but they are so powerful that at they have the effect of drawing everyone together into a small area of the arena to further up the chaos. It’s brainless, but chaotic. Thanks to the variety in these arenas, you’ll get a solid few rounds of local multiplayer out of Flip Wars, but ultimately the gameplay is so shallow that you’ll be itching to get back to something like Bomberman or Mario Kart.

Flip Wars isn’t helped by its complete lack of effort in the presentation. I like the minimalist aesthetic, but the characters have no personality (they’re wearing masks so you can’t even see them emote), there’s no effort to give players a story mode, or even a dedicated single player game with unlocks and rewards for playing. Even more damning is the online. As an aspiring competitive game you’d think that Flip Wars would have robust online infrastructure, but not once have I been able to get through a match. Invariably the match starts, everyone stutters and lags so badly that it’s unplayable for a few seconds, and then everyone quits. The game insists that it’s my Internet connection causing the problem, but given that I’m able to stream Netflix on high definition, play Overwatch, Final Fantasy XIV, and Mario Kart or Street Fighter 2 on the Switch itself without a noticeable drop in a single frame, I’m inclined to believe it’s actually the game’s netcode at fault here. Sadly, that’s all there is to the game. A “coming soon” button on the front menu promises that eventually Flip Wars will have tournaments and the like, but I’d be surprised if I even remember I have the game on my Switch by the time that comes in.

You also won’t get any value in playing it single player whatsoever. I have yet to lose a game with that AI opponents on the highest difficulty setting, and I had that difficulty setting at that point within three games. Now, I may well be some incredible savant at this game and doing things that other people would find impossible, but I really doubt it (for my own sanity; if my one great skill at life is a game I can’t stand that’ll be it for me). I suspect the AI is just so poorly programmed that that it can’t even closely approximate the minimal skills required to win at Flip Wars. 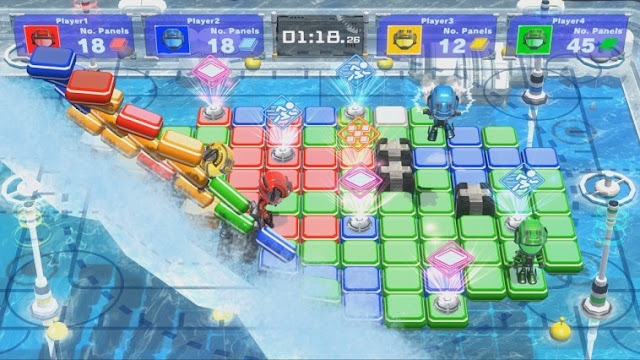 Well, look at that, I’m almost at 1000 words. Time to summarise and go and play something worthwhile. Look, I’m all for simple, elegant multiplayer games. Whether it’s Smash Bros, Bomberman, Tetris, or any of dozens of other games, most of the multiplayer games that I actually like playing work off very simple mechanics that are, on the surface, not as rich or deep as some of their “hardcore” genre peers. Smash Bros was never accused of being BlazBlue in intensity, for example. But – and there’s a big BUT – the best “casual” multiplayer games still have that depth; it’s just buried away for people that want to spend the time to really learn the game. You don’t need to care that Bomberman is actually a game of territory control to get seven friends together and have a great time playing Bomberman. But make an eSport out of Bomberman and I’d happily take a crack at the world championship, because I am good at Bomberman.

Flip Wars’ problem is that it has no depth whatsoever. That silly, simple, chaotic, and utterly pointless button masher that you had a quick laugh at when you play it for the first time really is all that’s on offer.

The fast five with Nicole Stark; the ninja pizza developer