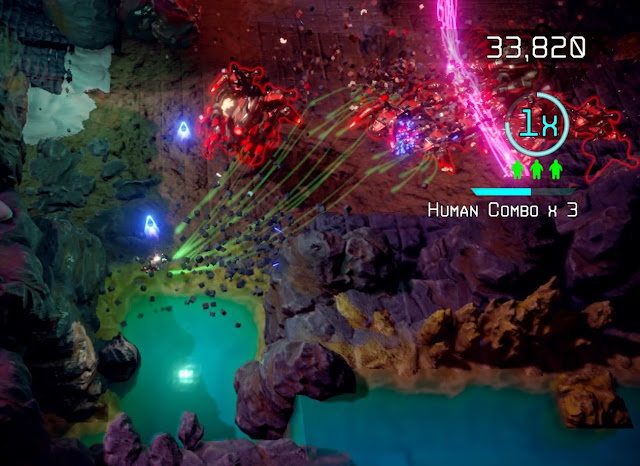 The essence of any twin-stick shooter is its core loop. That loop could be broken down into a staggered shift between shoot, move and rest, though in reality it manifests as shoot-while-everything and breath when you can. While the term “shooter” covers such a broad range of styles, perspectives and interfaces now, the core of a twin-stick still contains the markers of their originator, the original Spacewar! game from over fifty years ago. The departure from ruddered thrusting and fore-facing armaments to multi-axis movement and firing in a twin-stick means the patterns and flow is a faceted echo of what came before.

Though modern expectations of aesthetics and interactivity are met, whether intentional or not, Nex Machina carries itself in a way that mirrors the form of movement and attack in many shooters from the past. Whether it is in the curved paths traced to by the player to escape a crowd with elegance, or the deliberate flocking of enemies, the game resounds with echoes that are glancing or subtle enough that they may pass by unnoticed.

Nex Machina is separated into a number of worlds that you play through, with each world broken up into a collection of stages that you are pushed through one after another. It is an impatient game, offering little in the way of rest, quickly pulling you through stage after stage, with scarcely a breath’s worth of seconds before you’re rotated into the next stage. The most you are afforded is half a sigh before you’re in combat, carrying through the many stage from world start until its eventual boss stage. This consecutive flurry of stages raises the atmosphere of the game, causing it to seem more stressful by building a cascade of imminent danger. Neither is death a respite, as the respawn arrives at the same pace as each new stage. 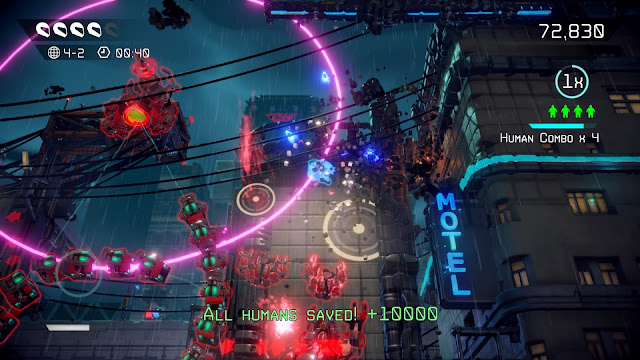 Sometimes you may find yourself whisked away so quickly because you hadn’t realised the last enemy you’d defeated on a stage was the last at all. The addition of a secondary goal in rescuing humans per each stage enhances the tension, as you must either find them and rescue them before your enemies do, and before the enemies have been dispatched, otherwise they won’t be rescued at all.

There are a few additional bonuses or powerups that are available through the course of the game, though this is as complicated as the gameplay gets. As most twin-stick shooters are, the controls are intuitive, with the direct of thumbsticks controlling both the movement and attack, so even those that haven’t played a game like it before can jump into Nex Machina with little more than a nod. The pace does also mean they’re thrown into combat repeatedly, and soon receive the feedback that’s appropriate to their approach to the game.

More advanced movement/firing patterns may be a little slower to come for them, but it does remain accessible to a novice. The partially destructible nature of the environment isn’t immediately obvious, though what starts as incidental repercussions soon become a valid avenue to engage in. 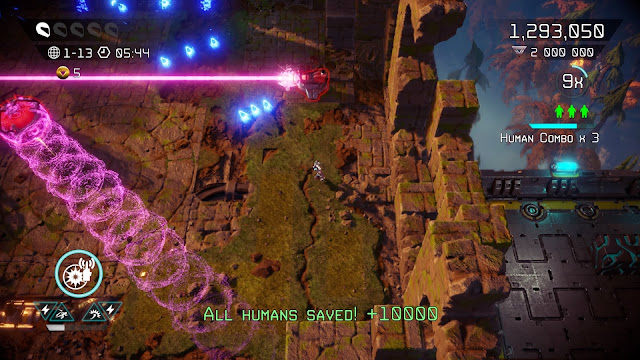 There is a semblance of a theme in Nex Machina, though it manifests more as an undercurrent or idea than a tangible realisation of it. There is an allusion to an uprising of machines that have become self-aware and had tired of their subservience to humanity, though this is a vehicle to sell the setting and the actions within it, rather than a pointed commentary on the role of technology in our lives. That the robots have grown homicidal tendencies in concert with their intelligence is only to provide an uncomplicated, potentially guilt-free force to attack, and the game doesn’t purport to explore whether humans didn’t have it coming as we most likely do. In effect the outcome is that an abundance of bright, shiny machines want to kill you, and your only means is to beat them to it – or more accurately, obliterate those robots without restraint.

The major issue with the robots is that they do come across as generic and interchangeable. There are a handful of them that present a significant or unique threat, but they don’t stand out as particularly interesting. An argument could be made that this is by design, and the outcome one might expect from a horde of mass-produced robots, yet the game similarly presents an artistic take on the metallic murderbots arrayed against you, in its loading screens. There the art direction shouts mecha, and a multitude of robots are presented through angles and shadows that are inconsistent with the bright and bulbous foes you face. The muralised depictions do not appear tied to any of the in-level incarnations, and that incongruity prevents the forms from building on each other’s strengths.

This doesn’t take away from the satisfying eruptions of colour that bloom and bounce about the screen, but also prevents an attachment beyond your own actions from taking hold. Most of the beauty in Nex Machina comes from its gorgeous environments, presented in a diminutive form almost in the vein of tilt-shift photography, and the layer upon layer of particles and emitters that bring satisfying brightness. It’s just so damn pretty. The screen rotation that happens between stages also goes some way in demonstrating just how intricately design this is, though the rapidness does suggest we never really see the full breadth of the artistry that’s gone into the design of each level. 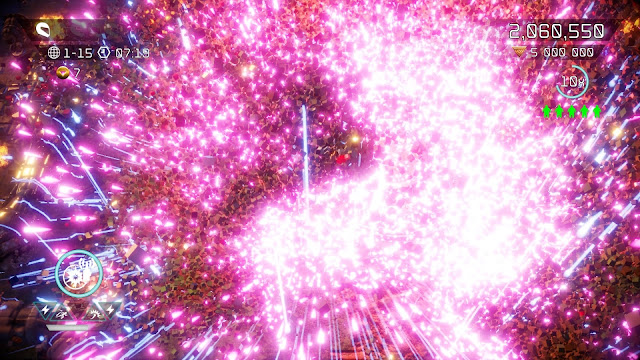 Sound design is mostly unobtrusive, relaying effects that feel appropriate to the action on-screen, and background music that’s present enough to feel part of its genre, but without standing out or catching in the ear. The only detracting point here, and a slight annoyance at that, is that the commentary around humans being saved sounds more like ‘safed’, but it’s a quirk without impact and scarcely worth the words.

There are a few different playstyles available, but the real relic, throwback and gem all at once, is the couch co-op. It’s a much tighter experience working in concert with another person, when your own lack of foresight in planning an escape path can be covered by a sibling in arms.

Finnish studio Housemarque have produced in Nex Machina another game to sit alongside its well-received titles of Alienation and Resogun, and that showcases the serious pedigree it has built since their start in the early nineties with Stardust. It is a rush of colour that delivers a satisfying experience that’ll steal your calm and let you imagine a future where the robots don’t wipe us all out.