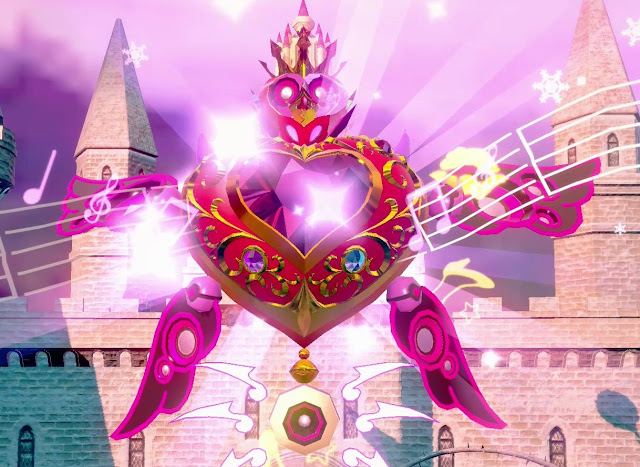 It’s been a good six years since the last Bomberman game was released, but it’s good that the series, which kicked off way back in 1983, is still kicking around. I always liked Bomberman games, though the series has flagged a bit in recent years, with ill-conceived attempts at making 3D takes on the game, as well as a very poor attempt to cyberpunk the series in Bomberman Act Zero, and then some very forgettable minor releases clearly made just to keep the series alive. Years after first playing Bomberman I find myself buying a Nintendo Switch, and with it the 33rd game in the series, Super Bomberman R. Thankfully this one takes serious steps in redeeming the entire franchise.

I jumped right into the game’s story mode. I wasn’t expecting much from the story – this series isn’t known for that – but it was decent enough in looking and feeling like a Saturday morning cartoon. The story may have been geared for children but the game itself is fun for everyone. There are 50 story mode levels spanning across five worlds. Defeating all the enemies is not the only objective in this game; there are a few levels that have you hitting switches, or others that require you to collect keys and so on and that adds a little verity to the levels. You can also play as any of the eight Bombermen – no, sorry, now it’s Bomberpeople – each with his or her own personality. Oddly enough, and really quite terribly, even though there are now two Bombergirls in the game, the references towards the characters within the game is still “Bombermen” and even “Bomber bros”. Way to almost arrive at diversity only to take a giant leap backwards, Konami. Each world adds something to the basic game, such as one world had ice while others have jump spots and moving platforms. The levels have a decent variety to them, and as an added bonus you can also play the full story mode with drop-in two player couch co-op

After eight levels on one stage, you will face two bosses. The first fight will be you against one of the five Dastardly Bombers, one-on-one. Each of the five Dastardly Bombers has a special bomb to contend with, so there’s a learning process in order to be able to take them on. Indeed, these boss fights can be tough at times, even on the easy difficulty level. Upon defeating those bosses, you will then fight a bigger and more powerful version of these Bombers, which is certainly a repetitive – but effective – way to scale up the difficulty levels. The boss fights all looked good graphically and the battles themselves were some of the best parts of the story mode. Beat the game and you get yourself a nice catchy J-pop song in the credits. You don’t get a better reward than this, surely. 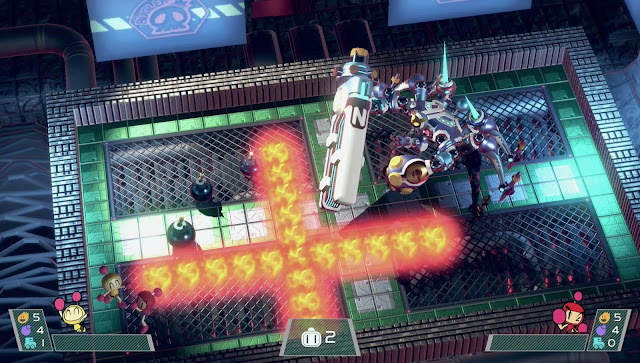 Multiplayer is where this game shines, of course. You can play with four players locally on the Nintendo Switch’s tablet, up to eight players hooked up to the TV, 4-8 players when there are enough Switch tablets in the same room, and up to eight players online. There are a few game modes here, but I found myself playing league play the most. In that mode you play up to three other players online and the first player to win two matches wins the game. Winning a game will net you league points and advance you to a higher level. Losing a match lowers your league points. It’s a good way of keeping people of roughly the same skill levels playing one another, so that you don’t have highly experienced players coming in and trouncing everyone.

You can play custom matches to allowing for up to eight players and change some of the rules and settings. The main problem with the online play right now is there is some lag at times, which I sometimes wonder whether it’s just one of the users has a bad connection, because at other times the experience was smooth indeed. As for the size of the community, I always found players on but not always enough to fill the room – which is fine because the game gets pretty chaotic when it’s filled with people.

Most people have played a Bomberman game before, but the basic idea is simple; place down bombs within a small, enclosed area and hope that one of them catches and opponent in the blast a couple of seconds later, removing them from the game. As a bonus, if you are defeated your “ghost” shows up on the side of the board and can toss bombs back into it. If one of those should happen to catch an opponent, you get to come back into the game. Ah, sweet revenge. 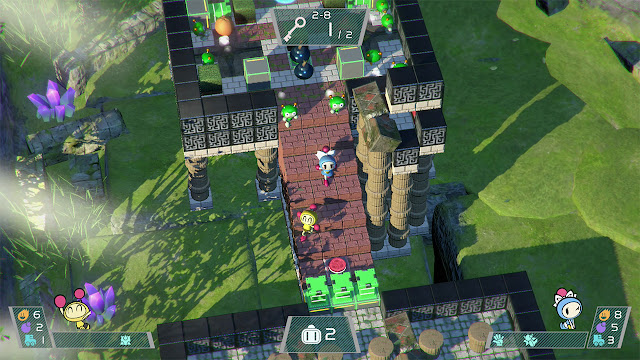 Winning online matches and story mode worlds earn you gems. Gems are used to buy continues when you die in the game’s story mode. The harder the difficulty the more you pay and the game does not give you a lot of gems for winning matches, either. You can also use gems to buy head cosmetic headgear for the Bomberpeople, new stages, and once you beat the game all five of the Dastardly Bombers for play too. The gem system seems a little flawed at the moment as it’s hard just to get enough to unlock anything but it may keep you playing; it’s almost like this game was initially designed for mobile and free-to-play monetisation before the developers changed their minds at the last moment.

Super Bomberman R makes a great party game if you have your hands on some extra Joy-Cons or Pro controllers, and playing with up to eight of your friends or at a party can be one hell of a time. The online options are also there if you want to play with friends or with strangers around the world. The boss battles even manage to make the single player game worth playing though, and that’s almost unprecedented for the series. It’s games like this that show the Switch is more than just a Zelda machine.

The DDNet Podcast! On our conflicted feelings on Ghost Recon: Wildlands, and getting into old games