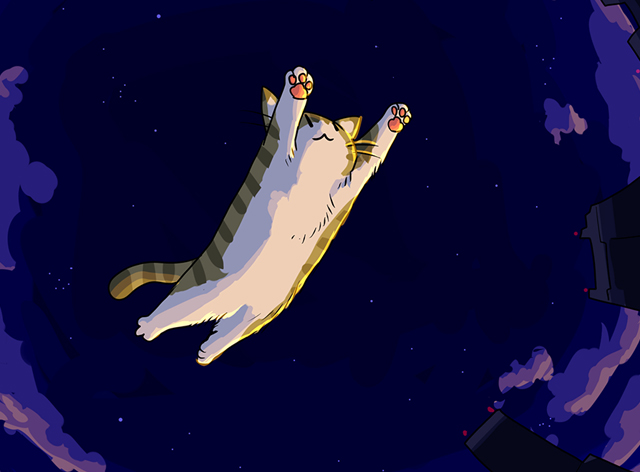 If you want your game to stand out, adding cats is a good way to go about it. Sure, cat games are fast approaching a level of saturation to rival zombies, but we’re not there yet – and a screenshot with a cute cat in it pretty much guarantees you a bunch of retweets on Twitter to spread the word. That’s the approach taken by Japanese indie developer DeathMofuMofu with its new game, Neko Navy, and it worked – when I saw the title, I was instantly curious; when I saw the screenshots, I was in love. (Or maybe they just like cats. The studio is led by someone called Neko Ninja, so… yeah, they probably just like cats.)

So, we’ve established that Neko Navy is a game with cats. But what do the cats do? Well, they shoot things. Lots of things. Any things, and all things. Hot dogs, weird space tortoises, jellyfish, cacti, germs, tubes of toothpaste, mannequin torsos, a humanoid breakfast buffet – and these are just the things that I have the words to describe. You name it, it’s probably an enemy in Neko Navy. Basically, what I’m saying is that this is a particularly irreverent shoot-’em-up, one that doesn’t make a great deal of sense because, frankly, it doesn’t need to. It’s got cats and you can shoot breakfast food. I’m down.

In keeping with that theme, there’s little by way of story in Neko Navy. You play as a flying, heavily-armed cat for reasons unknown (they are, perhaps, part of some sort of naval institution), and you shoot things that exist solely for the purpose of fun and humour. It works. I lost count of the number of times I was too busy laughing at my latest assailants to dodge their bullets. It’s utter silliness, in the best possible way. 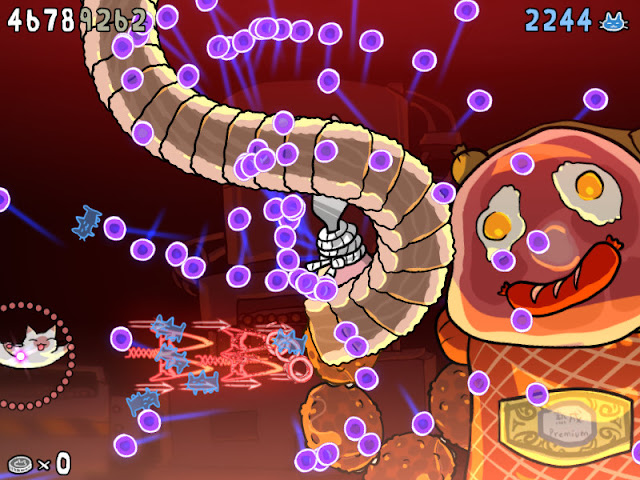 Don’t be fooled by this frivolity into thinking that Neko Navy is some easy-breezy shoot-’em-up, though. It’s not as complex as the genre’s stalwarts (more on that in a bit), but it’s not an easy game by any stretch, and on higher difficulties it’s downright brutal. There’s a smooth difficulty curve that makes it fairly approachable when played on Easy (though the last couple of levels can still be tricky even there), but when you get to the aptly-named Death difficulty, it becomes nightmarish. Admittedly I’m no expert, but I’ve yet to clear even the first level on Death, thanks to some obnoxious bullet patterns even from regular enemies, even with the game encouraging liberal use of bullet-destroying bombs.

When I say “liberal use”, I don’t mean you can just throw bombs willy-nilly. You have an unlimited stock of them, but you using a bomb empties a special gauge that has to be refilled – by killing enemies – before it can be used again. Sitting on a full bomb gauge means that every kill is a missed opportunity to refill the next bomb, so Neko Navy discourages hoarding. At the same time, it wants you to be smart about when you use them so that you get the most impact; there’s no sense in bombing a single enemy just because you have a bomb ready to go.

Bombs are also the cornerstone of Neko Navy’s scoring system, because bullets destroyed by a bomb all contribute to your score. You want to bomb as often as possible so that you get as many of these extra points as possible, but again, timing is key – bomb often, but try to bomb only when there’s at least a moderately-sized group of enemies. To add another wrinkle, each cat has their own unique bomb with its own properties: Chiyoko has a standard shmup bomb that clears the whole screen but is only present for a moment; Mugi spits a giant fireball that covers about half the screen, and stays present for a few seconds; and Miracle gets a flamethrower. 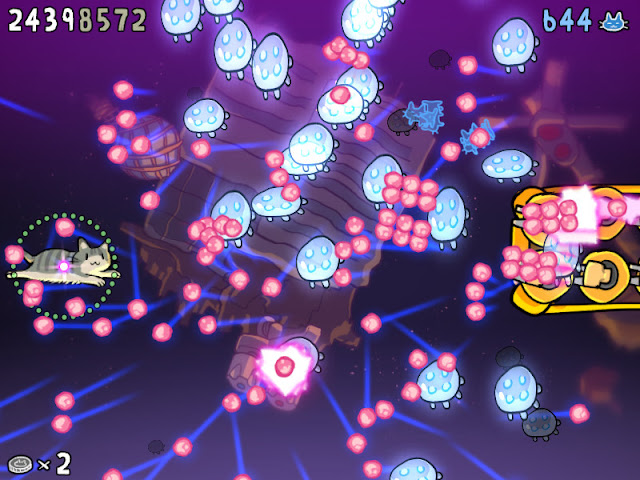 Aside from that, Neko Navy has a pretty standard scoring system: kill enemies, get points, kill them from point-blank range, get more points, don’t die, get a nice bonus at the end of the level. It doesn’t have the complexity that a lot of other modern shmups have, which makes it somewhat accessible for newcomers but might dull the long-term appeal for the hardcore crowd. Once you’ve figured out how to bomb efficiently, you’ve pretty much hit the ceiling as far as score optimisation goes.

Death mode will surely present a challenge to even accomplished shmup players, and that’s in part due to the fiendish enemy and bullet patterns, but much of the difficulty also comes from not having the precision control you need to deal with such patterns. Neko Navy doesn’t have a slow movement button like a lot of modern shmups, which is critical for navigating the sorts of intricate bullet mazes that designers come up with. Without that, you’re left with relatively large, jerky movements at even the slightest tap of a directional button, and no way to make those tiny, precise movements you often need to weave through a hail of bullets.

One other bone I have to pick with Neko Navy is the way it handles continues. This can be a contentious issue in a genre known for its difficulty, but it seems most developers nowadays are pretty content to have liberal continue systems. They make the game accessible to much wider audiences, and allow them to experience the bulk of the game without needing to perfect it one level at a time. Mastery of a game still depends on not using continues even when they’re available, so nothing is really lost from the hardcore side. 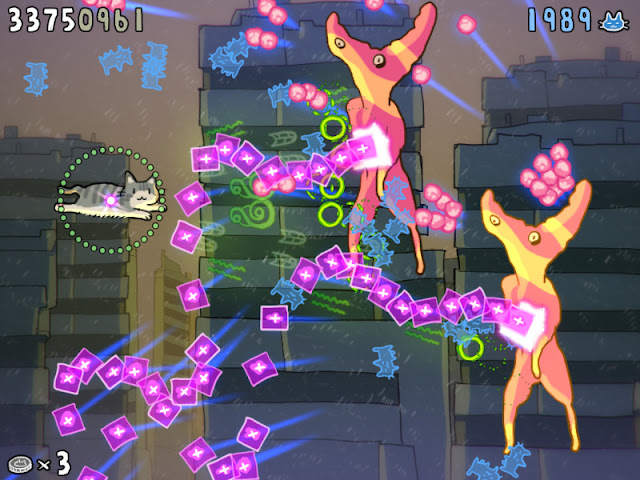 Neko Navy, instead, has a strange system whereby credits are accumulated with playtime. I don’t know the formula behind it, but it’s not quick – maybe one credit per 10 minutes of play, or thereabouts – and there doesn’t seem to be any way to speed things up. I can see the intention: to create a system where credits are unlimited but still scarce, and failure still comes with a heavy cost. In practice, all it does is create a pointless grind around the credit system, and getting through the game still comes down to mastery of each level, just as it does in a no-continue system.

Those little gripes aside, Neko Navy is a delightful little indie shmup, full of cute characters and oddball humour. It may lack the depth of some of its more established peers, but it’s got plenty of challenge to offer nonetheless, while a smooth difficulty curve means newcomers aren’t entirely left out in the dark. It’s probably not going to go down as one of the shmup greats, but its quirky charm alone is enough to warrant a look.