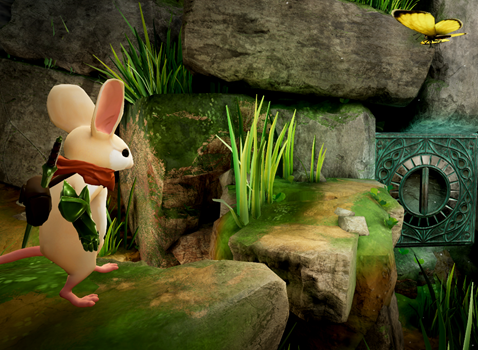 Of all the games that Sony showed off at its E3 conference this year, the most fundamentally interesting one must have been Moss, a game about a mouse that is being developed by Seattle, USA-based developer, Polyarc.

As an introduction to the adventure we are provided with a fairy tale-like book, which makes sense given that Moss’ protagonist, Quill, walks around on two legs and carries a sword with him. This mouse is a hero mouse, see, and he’ll face what we’re told are “compelling characters, gripping combat, and challenging puzzles” on his quest.

What’s odd about the game is that it doesn’t seem to leverage the PlayStation VR’s technology in any meaningful way. As a third person adventure game, it’s hard to imagine what players will be doing with the VR perspective that can’t be done using a conventional screen, and there was no indication on how VR will interact with the game in the trailer. Now, it might be that the development team couldn’t think of a way to represent a VR experience when representing the game in two dimensions (and fair enough, it is hard to sell VR with 2D vision), but it left the DDNet team a little confused as to why it’s being promoted as a VR game at all.


That being said, the developer has come out and said via a media release that VR is absolutely critical to the experience; see below:

“We are designing Moss with the fundamentals that we know make a great action-adventure game while at the same time considering every decision with the unique strengths and opportunities VR offers fully in mind,” said Tam Armstrong, co-founder and CEO of Polyarc. “As a studio dedicated to the new medium of VR, our goal is still the dream we’ve always had as game developers—to create engaging worlds and share them with everyone.”

“In Moss, players can reach out, touch, and interact with the environment while guiding Quill through her journey. As a character within the world, players will work together with Quill to solve puzzles, overcome obstacles, and conquer any danger that comes their way,” said Danny Bulla, co-founder and design director of Polyarc. “As gamers, we’ve been conditioned for years to hold a gamepad in our laps when playing games, letting our thumbs and fingers do the controlling. It has been a great experience to create an immersive game that encourages players to reach into and interact with a tactile world.”

If nothing else, we’re always up for more super cute games starring super cute characters, so colour us keen on Moss indeed.

E3 2017: Monster Hunter World looks great, but is it better than Toukiden 2?