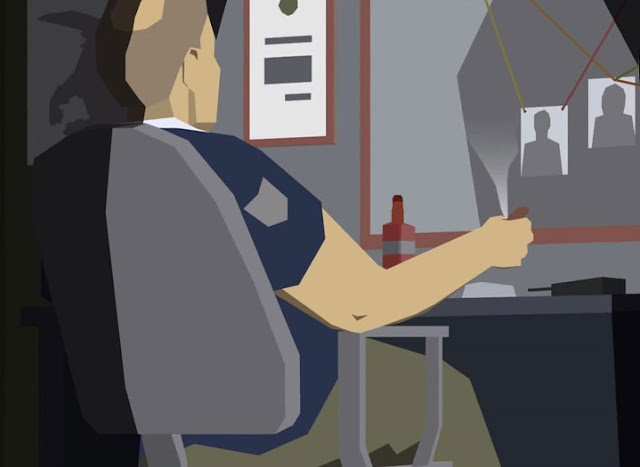 I have served the city of Freeburg for decades, but I am being forced out in six months time. I have no retirement plan; my focus has always been on making sure this city runs as smoothly as possible. I am Jack Boyd. And I am going to have some very difficult decisions to make with my impending forced permanent vacation. I can try to make the mayor happy. I can team up with the mafia. Or I can keep my head down and risk not having enough to survive when I no longer don my badge and gun on a daily basis. But while I’m making these decisions, time still continues moving forward. Criminals continue to break the law. So open up: This Is The Police!

The heartbeat of This Is The Police lies in the policing itself. As police chief, Jack Boyd is in charge of scheduling, hiring, firing, and assigning officers and detectives. Boyd is at the top of the policing ladder, with detectives below him and officers past that. Unfortunately, being chief means dealing with politics, and his boss — the mayor — is not the easiest person to please. Balancing the mayor’s wants with the population’s needs is, to put it bluntly, impossible. But that’s okay. That’s the job of police chief. Not everybody will always be happy, but as long as crime is stopped in a reasonable fashion you’ve done the job.

The narrative is intriguing, as are the choices to be made relating to it; however, the time management aspect of running the police department in Freeburg is what makes my eyes dry up as I forget to blink… what if I miss a call?! I find myself taking pride in my fictional job. When the mayor wants me to do something unfair, such as fire all the black employees in my department, I will stand with my staff and take the brunt of political complaints. Let’s be real, I’m being booted anyway. Who cares if I ruffle a few feathers on my way out for the sake of my moral compass? 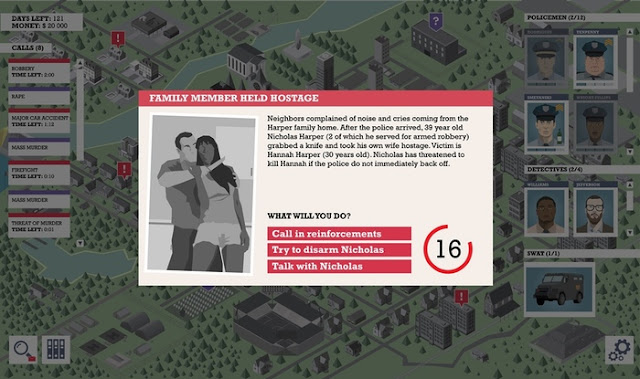 Outside of political circles, balance is key. Sometimes officers will ask for time off for a good excuse, like an extremely sick child. It’s best for everyone to let these people take the time off, or they’ll be useless anyways. Then there are the times that someone requests time off for a less than important situation, like their pet’s birthday. I won’t stand for this. Freeburg won’t run itself, and I can’t run it alone; Poochy can wait for their birthday cake made of dog food and topped with a sparkler. There are two shifts (A and B) that alternate days off, but Boyd (or, being honest, myself) can force people to work extra. Push them too hard though, and exhaustion sets in. Luckily, if someone is a poor worker they can be fired and replaced with someone that is hopefully more reliable.

Aside from the normal beat activity, such as robberies or assaults, Freeburg also has its share of serious crime. If someone is murdered or a crime of equal caliber is committed, an investigation takes place. Detectives will lead the way and, well, investigate — but Boyd is the one to piece the puzzles together. Unfortunately, gangs are running rampant and often tied to these crimes. With the proper amount of time and resources devoted to turning members on each other, these gangs can be dismantled. Don’t worry though, the job will never be done, as you take down one and another will appear instantly. Crime doesn’t sleep and neither can I.

Despite managing police officers and detectives as though they are chess pieces on a board, choosing who to send to what call and when, the employees aren’t completely faceless. They each of their own personality and vices, and some will respond to pressure differently than others. If someone has a drinking problem, they may need to be fired — or they may blossom if promoted by being given extra stripes. Boyd’s focus should be on his impending forced retirement, but my focus returned again and again to my workers. My city’s safety. Then something happens to remind me that I may need to do some nefarious deeds to make the dollars add up to living comfortably during my final years. 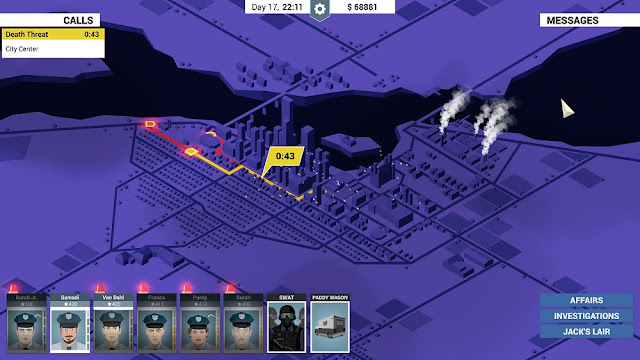 They say crime doesn’t pay. Unless, of course, you find a way to make crime pay. It may be honest: keeping your head down, trying to make everyone happy, and collecting bonuses. But Boyd’s situation is more than just financial and his former partner’s life is on the line, so quite frankly the game becomes exponentially more difficult by playing entirely on the straight and narrow. As far as I can tell that’s not even possible, although maybe my morals got the better of me; it’s easier to justify doing “bad” things to make money when they would have happened regardless. That’s what I need to keep telling myself as I embody Jack Boyd. I’m/he’s not a bad person, I’m/he’s just in one heck of a difficult situation with no right or wrong answers a lot of the time.

The entire game is one moral choice after the other that affects the citizens of Freeburg. If I have one civilian killed during a day, I feel awful; the odd time there are two, I’m in tears. To have three civilians killed in one day would probably lead to having a massive stroke, so let’s hope that doesn’t happen. Some may say its depressing, having to compromise part of your soul in order to keep living. I say it’s life. Although taken to an extreme in This Is The Police, we all chose what to sacrifice on a daily basis to continue with the lifestyle of which we’ve become accustomed. If someone works for eight hours, they’ve given up that amount of energy and mental capacity to make money; if someone decides not to have a full-time job, they sacrifice security for time.

Until now, I’ve mentioned very little regarding the narrative of This Is The Police. This lack of detailing does not mean I’ve skimmed past it to get to the meat of policing that I’ve taken to; instead, it means I don’t want to ruin anything. So here’s the nitty gritty: Freeburg is in a state of chaos. There are mafia wars going on as new blood tries to take out the old. There are whiffs are racial and feminist tension that the mayor would appreciate being taken out with force before the word spreads too far. At at the centre of this is your former partner, the one person you trusted the most… the one person coming to you looking for a way out of his mob contract. Every situation is tense, and no situation has a black-and-white solution. Narration is played out in a storyboard style that reminds me of Framed on the iPad. This technique allows for the story to flow minus any actual gameplay involved in it, which seems opposite what most games do – and was another part of This Is The Police I found incredibly successful. 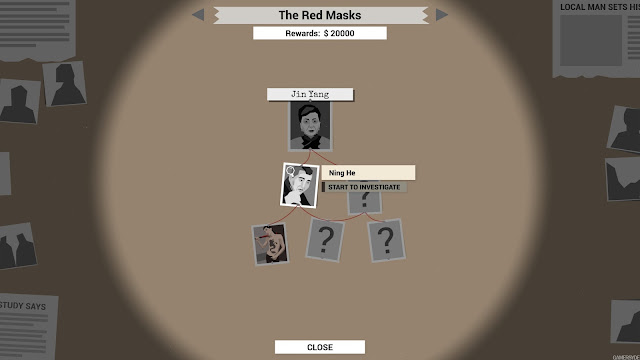 “Incredibly successful” is actually a wonderful phrase to go out on. I struggle to find an aspect of This Is The Police that I didn’t find enjoyable and appropriate for the style of game as well as what was promised in trailers prior to the game’s release. Taking over the role of police chief to run Freeburg would have been a great simulation/management game on its own, but then add layer upon layer of villainous folk and reasons to go over to the dark side, and the game becomes a fully immersive experience that requires great difficulty to put down.