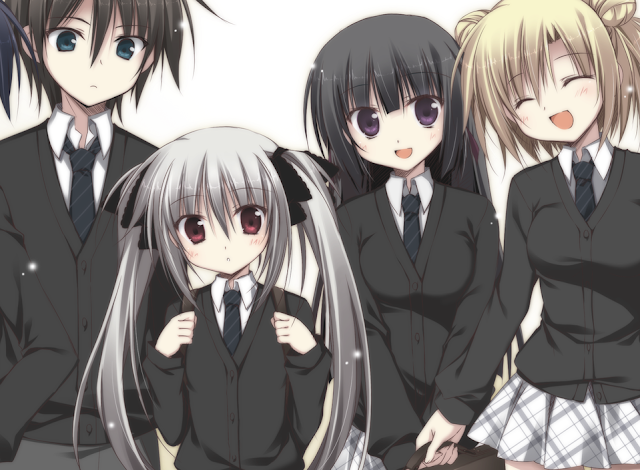 I never found out why the school is called Miniature Garden (the theme song is called “Miniature Garden of Paradise”), but that’s the only mystery I had to leave behind in this visual novel. Set in a secluded forest area, the school is known for its “seven mysteries”, and that also happens to be the number of endings to uncover. The mysteries provide fertile ground for letting the students’ imagination run rampant, especially since the mysterious events usually entail an unnatural death occurring on the night of the triennial Miniature Garden festival.

This school event is keenly anticipated by all, and on this occasion we meet two close friends – Yasunari, who is like an older brother to Ayana, a sweet girl suffering from loss of memory ever since early childhood when her parents ‘disappeared’. The two clearly bonded at an early age because Yasunari happens to be in a similar position, with both parents absent from his life and his foster parents insisting on never mentioning them. Yes, it is that kind of story, and it helps if you simply suspend disbelief right from the start in order to enjoy what is an engaging, thoughtful story.

Events are set in motion on the eve of the festival, when Yasunari is called by a message to the inner courtyard, hoping to trace the beautiful, silver-haired mystery girl he glimpsed earlier. But this is where things take a decidedly unsettling turn. He awakens much later, in a classroom, with a booming headache, and finds Ayana next to him; she wakes up with similar symptoms and agrees they may have been hit over the head. They are soon joined by two more students: Yasunari’s friend, the laidback and jokey Itsuki, and bubbly blonde Sumika (referred to as an ‘underclassman’), who also report waking up with a headache and no idea how they got there. We are half an hour into the story, and it is beginning to get spooky. Doors and windows to the outside cannot be opened, and time itself seems to have come to a standstill. 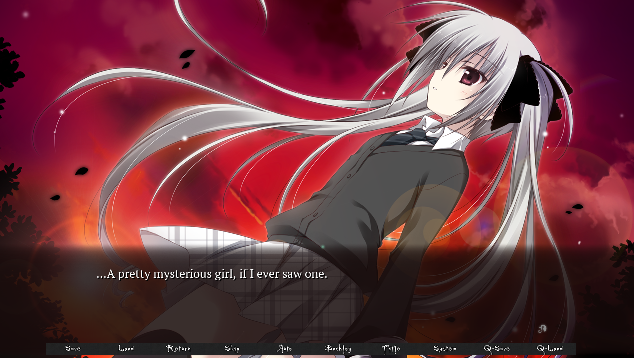 Itsuki appears to be almost relishing the situation; he is quite open about having applied to the school precisely because he is intrigued by the seven mysteries, and now offers ideas for their ‘investigation’. Yasunari, in contrast, is a taciturn type who refuses to accept any notion of the paranormal. Since he is the one from whose point of view we see most of what happens that night, it did occur to me to question early on whether he was perhaps an ‘unreliable narrator’. Let me just say that it is to the credit of the story that there is no clear-cut answer to this question. To heighten the sense of unreality, these four main characters are soon joined by the fifth – silver-haired mystery girl Rio. She can finally shed some very small amount of light on their predicament; basically, her message is that they need to ‘turn around the situation’ by midnight, or they may become victims as happened at previous school festivals.

As they roam the school, looking for clues, it soon transpires that answers must somehow be linked to events in their past. Why Yasunari cannot remember how he met Sumika is just one of the many perplexing questions to be unraveled. While I love stories about the “mysterious past” of characters, this brings its own problem with it; a deeper characterisation is hampered by the need to keep their past a secret. So we need to get close to and empathise with five characters in the here and now. That is no easy task, and their character profiles do fall back on anime stereotypes to a certain extent. This is offset by the two most striking aspects of this visual novel – the sparkling, beautiful graphics (by Korie Riko) and the exceptional voice acting. I was initially concerned that a ‘spooky’ story might be peppered with unbearable counts of high-pitched screaming, but the voice cast totally nails their brief. I don’t understand Japanese, but going by just the images and voices, I could’ve got the gist (if not the precise information) each scene was driving at. That’s how good the visual and aural components of this game are. They elevate what would otherwise be another imitation Danganronpa-style scenario: imprison a number of students in a school with a malevolent ‘presence’, force them to suspect and investigate each other, and even to commit murder. I hasten to add that the Danganronpa similarities are really superficial, as Miniature Garden establishes its own story-telling ambiance and objectives.

So finally we get to the most important aspect of any visual novel, the story itself and how it’s delivered. There are some technical blips and drawbacks here. A consistent blip is the patchy translation. Regular grammar mistakes as well as infelicities of expression and phrasing occur throughout. While these did not amount to making the story points incomprehensible or misleading (although I had to re-read several dialogues carefully due to ambiguity), I felt that it hindered my complete immersion. The other narrative aspect that disrupted my immersion, at certain crucial points in the story, was the shifting of perspective away from the usual Yasunari first-person point of view. For example, when Rio is on her own, making a discovery, we are switched to her first-person POV. The first time this happened, I had to double-check, wondering whose voice I was reading. I think it is an ungainly, lumbering technique that breaks the flow of narrative experience, and the writers were obviously aware of this issue since these switched scenes are prominently marked in the top corner as, for example, “From Rio’s Side”. Keeping a consistent third-person viewpoint (what’s usually referred to as a ‘close’ or ‘intimate’ third-person POV in story-crafting terminology) would probably have worked very well for this story. The belief that first-person provides, in and of itself, a more direct and personal engagement is common, but certainly not the case when it leads to a choppy delivery at key moments. 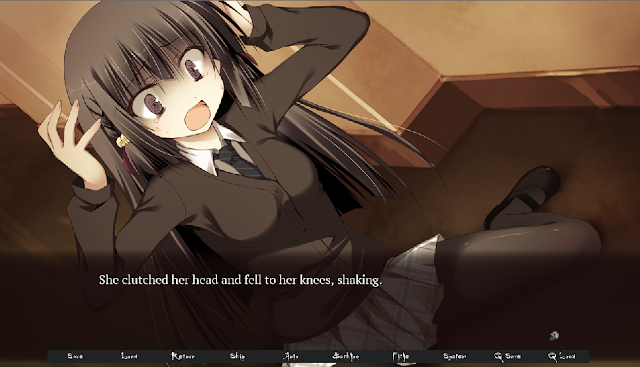 It took me a while to get into the story properly, for the build-up is slow and you need some patience, despite the relatively short duration of a first playthrough (four hours, tops). But as the past unravels and complex relationships and events emerge, I could not help but be drawn towards the ending. There are certain elements propping up the story that will come as no surprise to readers and players of Japanese visual novels and anime, such as the ever popular nefarious organisation at highest echelons. You always get the problem that sometimes the story has to accommodate the plot devices in tales such as this one, where all the minutiae have to dovetail together and make sense, so I make allowance for that, as long as the details do all snap together satisfactorily in the end. And they do.

I was fortunate that my first ending happened to be a ‘major’ ending. I don’t believe there is one “true” ending here with other subsidiary ones tacked on (as is common with many visual novels). Rather, there are three endings that I thought were fully-fleshed, major endings, each one satisfactory in its own way, with four ‘minor’ endings (one is called, tongue-in-cheek, The Traditional Ending) to round out the possibilities and variations. The other unusual facet of Miniature Garden, for me at least, was that I felt more motivated to continue uncovering paths and endings than is usually the case for me. Each ending leaves some questions unanswered. Plot holes? I wondered. But no, as I delved deeper into the multiple paths, I found that all my residual questions were eventually answered. You are left with a very particular kind of satisfaction once all parts of the story come together via different routes. When I say my questions were all answered, then this does not include the more general, lingering kind of questions that any good story will leave you with. A story has impact beyond the immediate conflict-resolution cycle if it leaves you with dilemmas to ponder, and Miniature Garden does this well, with a fundamental ethical dilemma anyone can relate to. It is perhaps not the most complex, involved kind of dilemma, but it is one that is actually remarkably well suited to the psychological terrain of teenage students.

Ideally, I’d love to have a short visual novel like this available on my phone or other portable device; it would be perfect (with a total playtime of about eight-ten hours) for a long trip. Miniature Garden calls itself a “mystery visual novel” and that pinpoints exactly what it is. It is strong at establishing an atmospheric story, aided by outstanding graphics and a highly talented, very natural voice cast who know not to over-act. It falls short on some technical fronts (translation, some over-familiar tropes and cumbersome narrative viewpoints), but these do not decisively mar the enjoyable experience.

Review: This Is The Police (Sony PlayStation 4)